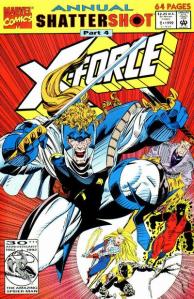 Inside front cover ad is for the video game tie ins for Terminator 2, on NES and Game Boy.

This is the only part of the story that I own.  Luckily it takes place 100 years in the future, Mojoverse time and ten years in the Marvel Universe time, from the previous part.

Issue opens up with an arena scene of spineless ones (Mojo-types) versus bipeds (human types) and they are fighting each other.  The bipeds get the upper hand and the main guy looks up to see if he should kill the Mojo looking fella.  Shatterstar is the new man in charge, having dethrone Mojo V.  The crowds are chanting for cancellation, because they still use television terms.

The irony, of course, is that humans finally overthrew the old regime and now are just doing the exact same thing.  Shatterstar’s inner monologue reveals that he knows it is wrong but his people deserve this with how long they were slaves to Mojo.

Shatterstar gives the nod and off goes one of the spineless’ head.

I imagine that if they wanted the spineless ones to live, they would chant – renew! renew!

Meanwhile, it is winter time on Earth.  The Xavier School has been shut down, as it is more fortress than school.

From a portal comes, Arize (a human) and two spineless ones.  This is where we learn the time difference.  Arize thinks to himself that if he knew the new face of the revolution was going to behave like the old, he wouldn’t have tried to even change anything.  What was the point?  How much revenge killing is necessary?  The two spineless companions are – Shecky and Milton.

Their scanner reveals that something fast is coming their way as we are introduced to the latest X-Force!

Francine Power is Powerpax, has all the powers of Power Pack, combined.  We don’t learn anything about if she is the daughter of a member of Power Pack (most likely Alex or with the hair style that matches Julie).  Cypherlock is such a better name than Douglock.  The Illyana here is a proper version of her, meaning that Inferno happened, she was de-aged to be seven again and now ten years later, she’s a proper 17 year old.

I like the idea of this Illyana, and surprised more alternate timelines don’t play with the concept of a Post-Inferno Illyana, who I can only imagine would be extremely strong and with the heroes surrounding her, would inform her of her power levels and her potential.

Essentially, this current X-Force members see spineless ones, two to one, with a human and just assume that they are holding the human prisoner and attack in full force.  Which is pretty racist of these mutants but I get the impression the years that have passed on Earth, have not been the kindest.  Still, no excuse for racism! 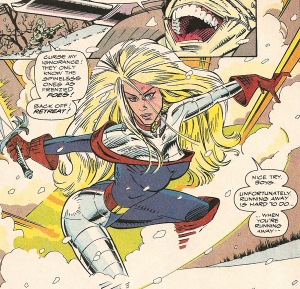 Arize tries to stop the attacks.  Magik, who is going by Darkchild – so I suppose I should call her that – is teleporting around the second spineless one, Milton and taunting him.  Powerpax already took out Shecky.  Is Shecky and Milton a combo of names or something, I get Milton but Shecky?

Darkchild refers to Sam as Uncle Sam, he doesn’t care for the name.  It is a nice way to show that they are not quite teammates, there is an age difference so she views him differently.

Arize wonders if this gal he sees is Banshee, and Cypherlock corrects him that the young lady is Siryn.  Also, that Banshee died, August 27, 1998.  Good for him, he didn’t die that year.

Arize finally gets everybody to stop.  He explains how he needs their help, as Shatterstar wasn’t the solution Mojoverse needed.

Meanwhile, in Mojoverse, we see that Shatterstar is being given bad advice from Schedular (they keep things simple in Mojoverse).

Back on Earth, Arize is seeing the change that has occurred over the years.  The X-Force that helped the last rebellion was – Cable, Cannonball, Siryn, Warpath, Shatterstar and Cypherlock.  Xavier had gotten more Shi’ar technology infused with the mansion.  Xavier is dead, he gave the school over to Cable, who is also dead.

Arize explains what has been happening on Mojoverse.  I imagine it is a recap of the previous three chapters.  Essentially, Longshot finally got the revolution he wanted.  We get the origin that has made Mojoverse the confusing mess that it is.  So they make this video that should teach the spineless ones about respect and to be kind to people who don’t look like yourself.  Then they sent that message back in time, instead of teaching them things, it sends them insane.  Now they are back at the time when they are about to send that message back and they have realized that it was the bipeds that have been the problem the entire time.  Or worst, that they are in a time loop of disaster!

During the Longshot section of the story, Capullo gets to draw the Outback Era X-Men.

Cannonball realizes that neither bipeds or spineless ones should be in charge of Mojoverse.  Arize has a solution to that, democracy!

Over at Mojoverse, the Schedular is up to no good, complicating the plot.  I have to be honest, when Illyana isn’t on the page, the story really does seem overly complicated and unnecessary.

X-Force shows up in the Mojoverse.  Darkchild makes a reference to how this is nothing more than the Roman Arena.

X-Force runs towards the ruling box and Arize, Shecky and Milton attack the gladiators in the arena.  Then Arize gives the cue and all the bipeds are paralyzed in place.  Shatterstar orders the fights to end.

The Bipeds took on the name of – Freeman Armed Network, thought that should be mentioned somewhere here.

Arize is wearing a helmet so that no one would recognize him.  Not sure why he needs that.  So that he can appear to be one of the people?

Shatterstar asks him to take off his helmet, he does and he thanks Arize for reminding him of his original goals on this planet.

Arize is the guy who created the biped race.  The spineless ones must have been the original inhabitants and wanted entertainment and mimicked what they found on Earth.

There is some fighting with Pro-Shatterstar supporters and the people who are convinced that the Schedular and the old ways are the way to keep going.  Of course, all these fights take place in the arena, where else would they be?

The Schedular reveals some of Shatterstar’s origin.  They sent him to Earth, like what happen with Longshot, so that Shatterstar could may be killed on Earth but really, they just needed him to be gone so that they can build this reputation for him on Mojoverse.  Which they used to make him king when he came back.

Arize is going to find all the spineless ones and cure their insanity.

X-Force was really only there to be a distraction or an extra force for the latest rebellion.  It could have been anyone really.

This story ends with a cloak figure taking off his hood to reveal an aged Longshot, happy to finally see peace brought to his home world.

The March CoolMeter from Cool to Uncool –

Ski trips with the gang