Previously : After confessing his undying love to Kitty Pryde, Doop learned how to speak English!

Continuing the best aspect of Battle of the Atom! 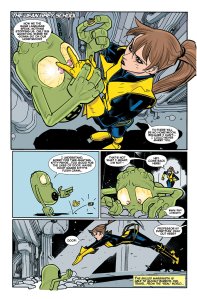 Kitty politely turns Doop’s marriage proposal down.  It isn’t due to him being gross looking.

He sinks into the ground, feeling rejected.  Kitty dives in after him.  Here she learns of, Marginalia – the place between the panels.  The margins, get it? 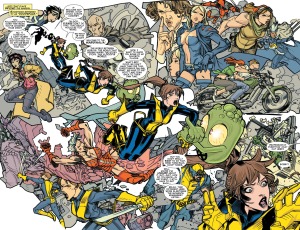 We see images from Battle of the Atom.

Doop takes Kitty to his favorite restaurant – Chateau du Armpit.  Next, to Cinema of Emptiness – the screen is blank.  Then they go dancing.  Doop is doing his best to woo her.

Doop is also trying to get Kitty to accept her irrational side.

Then the BotA portions kick in again.

The three Icemans are talking.  Young Bobby calls Present Bobby, which I find odd.  Shouldn’t they have a cuter name by now?

We see Kate Pryde, that we know really is Raze.

We revisit the Jean and Scott running away and stealing laundry scene.  Kitty isn’t pleased that Doop video taped Jean getting undressed.

This is during the part of BotA where Kitty is deciding what to do.  She wants the Original Five X-Men to decide on their own to go back to their timeline.  The other X-Men want to force them to do it.

We revisit one of my favorite scenes from BotA, where Kitty and Rachel eat Chinese food.

Issue ends with Raze and Doop being in the Doopspace.

Someone wanted this review maybe a month ago.  Thank you for the interest, having back to back event months put me a little behind on current reviews.  I have maybe ten waiting to go.

Hopefully the comic readers are not losing interest due to all of the Big Brother 16 posts, but those are tracking so well!  Thanks to you newer visitors that are finding my blog through that show.

I can let you know that in August, I have some plans for the Friday posts – so I am not sure how I am going to do the Thursday recap.  Tempted to let it go, but we will see.

I just wanted to to address the comic fans that visit, that show should end in September and I have a quasi-event plan that is comic book related that will take top priority in August.  It shouldn’t be the entire month so I don’t want to refer to it as a Month Event, officially, but I do refer to it as such to myself, so I may slip and call it that here from time to time.  It just rolls better.

So comic readers, please be patient and Big Brother viewers, I hope you like comics and stick around.

I am trying to balance the two groups and it may get dicey, but I hope everyone can, at the very least, enjoy half the posts.

September may be the same but that should be pretty limited, though I can’t seem to find an official last Big Brother 16 finale date.

Thanks to both groups of visitors, again, I really do appreciate everyone who comes to S&FwM – Thank you so much!