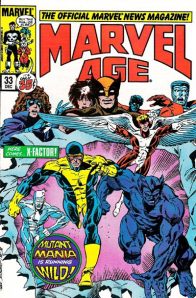 Great homage cover to Giant Size X-Men 1.  I like the current team being replaced with the Original team, but they are X-Factor in this instance.

I really like Marvel Age, it works as a perfect time capsule of what was happening at Marvel.

This issue offers a lot of nice coverage.

Some comics coming out were :

X-Men 201, the duel between Storm and Cyclops for leadership!  Imagine buying this off the spinner rack?

Mini Mutant Report – Mary Wilshire is the new artist on New Mutants, Bill Sienkiewski will be inking her.

There is a page regarding Flexography.

The first big feature is that the very first Spider-Conference has happened.  Which is crazy as we take that for granted now.  I remember when Wizard would have articles regarding the various Spider- and X-conferences and how the big stories would come from that.  I’m surprised it took until 1985 so Marvel could fly everyone to one spot and discuss the next year’s worth of stories.

Punisher is getting a limited series by Steven Grant and Mike Zeck with John Beatty.  This is the Circle of Blood storyline.

Fred Hembeck draws a goofy interview with Cyclops, where all of his answers to questions start with “X-” like “X-citing” and “X-pired” and such.

We get to the cover story, which is a multi-page / multi-part featurette on new series, X-Factor.  The initial art shows how Cyclops was originally going to be blue/red costume and Beast was going to have the blue/yellow but they switched it but all the interior art shows their costumes as the other way around.   Funny how, at one point, someone wanted to take Cyclops’ away from his yellow and blue color scheme and try something else.  It wasn’t until Astonishing X-Men with John Cassaday, that he got away from those colors and experimented with some black and red; which he has now.

The fun aspect to the feature is that they are really trying to keep the secret fifth and lady member of the team.  Fans wouldn’t have thought it was Jwan, as that would require bringing her back from the dead.

As usual, there is a flashback feature, this time for – the final third of 1969.

Back Cover has the birthdays of September 1985, which is becoming a fast favorite of mine.