Title : Heart of the Matter

We are jumping ahead a little in our Excalibur run.  We are doing so because we are celebrating Valentine’s Day!  This title has the word, Heart, in it and we got lucky as Lockheed appears in this!

I’ve written (and thought) that this is by far the worst Excalibur arc.  It still might be but the final chapter isn’t as bad as I recall.

So Doctor Doom is trying to take over Limbo.  They keep referring to it as, Otherplace, for some reason.  Avengers West Coast is there as well.  There is a material known as Promethium, and Doom needs it to control Limbo.  Wonder Man is there and he is the worst.

Iron Man tackles Doctor Doom, they have a fun exchange.  Doom can’t believe that Iron Man would dare touch him.  Iron Man thought with the two layers of armor, it would be okay.  The demons of Limbo start resembling various heroes that Doom knows.  Such as Beast, Spider-Man, Daredevil and the Punisher.  Kitty gets to fight the Punisher demon.

Doctor Doom is confronted by Darkoth, who speaks with red letters inside dark purple speech bubbles.  It is super annoying, hard to read and irritating.  Probably the greatest exchange in the history of exchanges happens.

Darkoth – You Don’t recognize me, do you?

Darkoth – I’m the man whose life you destroyed.

Doctor Doom – You can’t possibly expect me to remember every life I have destroyed.

Such a great line!

Since Doctor Doom was the last person to touch Illyana’s soulsword.  So he controls the demons.  Since his armor has been destroyed, he has access to her style of armor.  They start to fight.  I guess Doom leaves Limbo, it isn’t very clear.  The demons revert to their proper forms.  Almost on cue, S’ym shows up to try to fill the void of leadership.  The combined heroes have to fight off all of the demons and undo what Doctor Doom started.

Meggan and Darkoth talk.  He recognizes how strong she is.  He takes over leading Limbo, which I’m not sure if he is ever referenced as one of the leaders of Limbo.

This is his last appearance until 2011.  He was a bigger deal in the 70s and then scattered appearances in the 80s.  He is the sacrifice this storyline required. 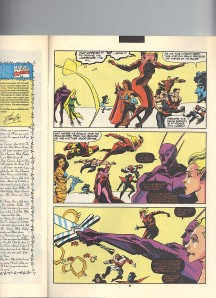 A bunch of exposition happens but the key thing is the small action in the background.  Kitty heads over to Lockheed on the ground. 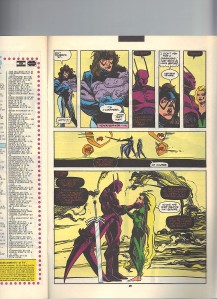 Doctor Doom hurt Lockheed.  The editorial note states it happened in issue 39 but this is issue 39.  I believe it happened in part one but it could have been last issue as well.  We’ll get there eventually.  Lockheed looks like a sad Cerebrus in Kitty’s hands.

Issue 40 is a Lockheed lovefest where we see him and the Flock.  We’ll get to it one of these days.