The alien wants to know which of these villains killed Wolverine.

Turns out, the alien is none other than . . . Imperial Guard member, Fang!  Wolverine and X23 have both worn this guy’s costumes, for moments in time.  Has it been revealed yet, how X23 got a lady version of the outfit?

Sabretooth attacks Fang and is brought down hard.  Mystique has heard of Fang before, she is well versed in all the crazies that inhabit the entire Marvel Universe.  Mystique knows that Fang should be dead, killed by the Brood.

Fang laughs, as no one – including the Brood – know how to kill a member of the Lupaki race.

Mystique can tell that Fang is only messing with them, he isn’t out to kill any of the gathered villains.  He is merely after sport. 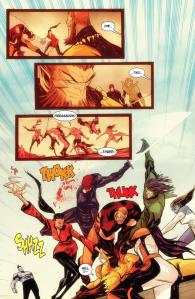 X23 tells everyone to attack Fang as a team, which means to dogpile (wolf pile?) which is not the same thing.

Very much like a cartoon character, he Triple H no sells everybody off of him. 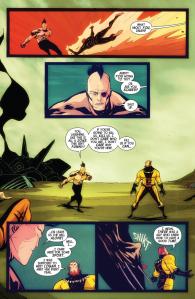 Daken, the only one to not attack yet (why would he, without his healing factor, one eye and one arm?) tries to talk to Fang.

Lady Deathstrike checks on Shogun, he is knocked out.  Once he comes to, he says he can’t see, but I don’t show from any of the previous pages, where he suffers any damage to his eyes.  Maybe his mask is covering his eyes?

Daken, while Fang is telling stories of his father, puts three claws through Fang’s head.

Fang laughs this off, as humans are so silly to put their brains in their heads.  Silly humans.  Fang goes back to wondering who killed Wolverine, he did his research, it should have been one who is present here.

Some Time Ago . . . Fang and Wolverine are drinking beers and talking about their lives.

Apparently, like Sabretooth – but the opposite – Fang hung out with Wolverine, one day a year.  Sabretooth, use to, try to kill Wolverine on his suspected birthday.

Fang starts crying, realizing that his friend is dead and he wasn’t there to help.

We get another scene where X23 really doesn’t belong on this title.  She has to be the one to tell Fang that done of them killed Wolverine, though many wanted to.  X23 never really thought Wolverine would ever be dead.

Mystique goes to a website, I wish she name checked it, and learns that Lupaks’ have a semi-autonomous gland that is invisible to the human eye.  It floats about a foot away from their bodies.  Reminds me too much of how EVA works for Fantomex, unless that has always been the case with Fang but it feels like a retcon.

Mystique wants someone to head back to their ship and ready the cannons.  Junk is far too eager to do it, he’s probably tired of only watching this very confusing issue (from his perspective).

Fang tries to explain that it isn’t a gland, necessarily.  Sabretooth punches him to Fang’s face, which he doesn’t appreciate it as he is trying to give some never-before-known-factgs. 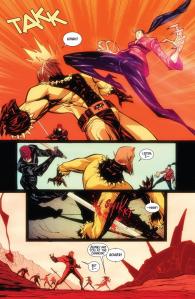 Lady Deathstrike gets into the fight, and knees Fang to his face.  Shogun stabs Fang to the leg with an s-word.

Shouldn’t somebody be trying to attack the air around Fang, to try to hit the gland.

Junk opens fight with all of the canons.

There is now a giant crater.  X23 feels bad as she was using her words to get through to him.  Then laughter comes from the grater.

Fang is having such a great time.  This issue feels like a real departure from the previous seven issues (I imagine issue two wasn’t like this), as it is light and there are jokes throughout it.  I could use more of these type of issues.

Fang comes up with the premise for the next several issues (I imagine).  He wants to go on an adventure with each member of the Wolverines.  Fang chooses Daken to be the first one.

Fang states that it isn’t a gland, but doesn’t elaborates on that. 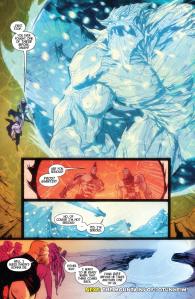 Fang is taking Daken to the Mountains of Jotunheim.  Which is exactly where a guy without a healing factor wants to, where Frost Giants are.

Issue ends with Mystique wanting to be ready to kill Fang once he returns.  She doesn’t care if Daken returns alive.

So this issue doesn’t have any Ogun voice captions but I think, with this series, going forward – that I am only going to post the pages with Ogun’s narration boxes.  Something I’m thinking about as Shogun is clearly becoming a larger part of this series and I am hesitant of posting so many pages from every issue.