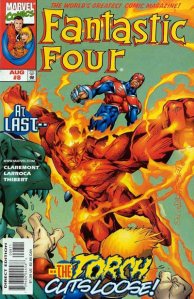 I own this for the awesome chess set, but we will get to that later.

Issue opens with Reed Richards, Invisible Woman and Thing fighting off the Captain Britain Corps, minus one important one.

There is an ad for Small Soldiers, a decent little film.  This is one of those movies, with a super young Kirsten Dunst, that when I see her nowadays, she reminds me of how old Tommy Lee Jones must be these days.

The Human Torch shows up, wanting a set-rep but there isn’t any time.  Franklin is annoyed that this fight over him is even happening.  He kick starts his family’s powers that they are working on a massive power surge.  Johnny goes supernova in the sky and burns hotter than ever before.

Johnny grabs Gatecrasher and learns who the key factors are.  Human Torch demands an audience with Opal Luna-Saturnyne, the Omniversal Mastrex.  We see Roma is sitting at a chess board.  The previous people who met with Saturnyne, was the cosmic identities – Eternity and Infinity.  So Johnny knows how big of a deal this is. 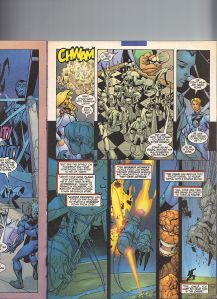 Now, that is a Marvel Chess Set I would buy!

I wonder how the script was written.  Did Claremont specify which characters to feature?

CC : Larroca, you may include anyone you want, just make sure you have the Fantastic Four and Kitty Pryde.
SL : Chris, may I call you Chris?
CC : No
SL : Chris, how do I make sure it is Kitty Pryde?
CC : You beautifully colored artist you, you put Lockheed on her shoulders and call it good.

I like the idea of Saturnyne and Roma being used here.  I’m sure they should be used in those Incursions in the New Avengers stories by Hickman.

I really enjoy seeing Human Torch stepping up and stepping up and confronting Saturnyne and Roma.  He always seems to have one foot ready to go out of the door.  Thing talks a big game but he’s never really going to leave.

Franklin has given all of his family members a power boost.  Torch’s Nova Flame was as strong as a sun burst but now it is as hot as the sun itself.  Reed can stretch from the Earth to the Moon.  Sue can crush tanks now.  Thing is small moon destroying strong.

Not to mention that Franklin created Counter-Earth and sustained it for a year.  Good thing he is being raised by loving parents.

Saturnyne is tempted to destroy Earth, to keep Franklin’s powerset under control.  Johnny makes a bargain that the Fantastic Four will watch Franklin and if they fail, all five of them will be prisoners of Saturnyne.  The day is saved!

We learn from Gatecrasher that the real New York City was never in jeopardy of the Fantastic Four / Captain Britain Corps battle.  It looked like the Corps appeared in front of them but really, the team showed up in front of the Corps, as they were in a pocket dimension.  Pretty clever!

There are a few pages of the abandoned Jose Landronn Fantastic Four / Inhumans project.  He is still my favorite Cable artist, as his and Joe Casey’s run on the title is still the only readable Cable solo title.

Issue Nine promises to have a classic old school team-up of Spider-Man and the Human Torch.  I remember it being pretty good.