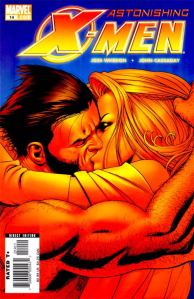 The famous Kitty Pryde and Colossus have sex issue!  Before that, this stuff happens!

Issue opens with Scott’s memory of Uncanny X-Men 132, where Phoenix holds back Scott’s optic blasts and then they make sweet sweet love, like one does with a cosmic entity, in New Mexico.

This entire flashback sequence is Emma’s attempt to take Scott off the board.  To make matters, more hurtful, she turns Scott into Logan and we are treated to Logan and Emma kissing.

“Logan” pushes Emma away and claw punches her but silly Scott, he no have claws!  Which he will throw back in her fact, in issue 17.  Well, not her face but Perfection’s face – but he doesn’t know that then.

Meanwhile, Piotr and Kitty are up to no good and we see Kitty phase through the floor.

We learn that she was receiving oral sex (good job Piotr!) whens he phased through the floor.  Either Wisdom never did that or she kept herself in control.

Over with Scott and Emma.  Emma is taking Scott apart, piece by piece.  She is now attacking his leadership skills and his original leadership position.  Jean was Xavier’s favorite, Beast was a genius and good with people, Angel was so good looking and Bobby was funny, I guess.  Emma claims that Scott had nothing else, so that is why Xavier picked him for leader.

Does Emma and Scott ever talk about these scenes, once they are on the other side of it?

Scott tries to shut it down.  Emma tries to claim that she is trying to get to the root of who Scott is.

Emma points out that the one time Scott had to fight for leadership, in the legendary Uncanny X-Men 201, he lost to a powerless Storm.

Emma segues this into the topic of Scott not having any control.

SWORD Peak Station.  Brand, Sydren and the other dude are discussing the result of which X-Man is going to destroy Breakworld.  They know who it is but we are not shown which X-Man it is, yet.

Back to Emma and Scott.  She has taken Scott to his “Bug Room” a concept that Grant Morrison / Cassandra Nova came up with, where you see your essential.  Scott’s is three giant cockroaches.  She goes over Scott’s brief origin, that he hit his head once he landed from the burning plane, along with his brother, Alex.

We get a never before scene, that I know of, of a young Scott sitting in a bed.  Young Scott is deciding that he will forever be in control of his power, so he made sure that he wouldn’t be.  I guess?

In the morning.  Logan is eating cereal and he split a little milk. 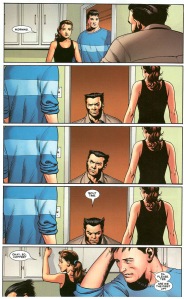 Kitty and Piotr come into the room and Logan instantly knows that they have boned.  Which is super awkward that he even addresses it.  The two of them don’t really play it off well.  Was Logan always sniffing her, in the mornings?

Beast, in his lab, is confronted by Cassandra Nova.

Issue ends with Scott, with his brown eyes open, but no optic blasts.

Mails to Astonish – Letters from – John Cribbs / Adrian J. Watts of Melbourne, Australia and Brent Hand of Fort Worth, TX.

With this, we end our short revisit to Astonishing X-Men.  We’ll get to the rest of the issues, eventually.