I had to add the Adi Granov variant to my wishlist as Hastings didn’t get the variant for this issue or Secret War Journal. 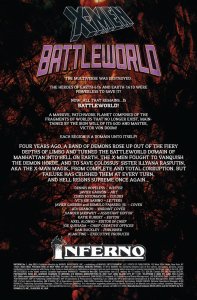 In this region of Battleworld (but it doesn’t have the Battleworld banner, for some reason), Limbo won Inferno instead of the X-Men.  Now it is five years later.

Inferno : Year Four.  Empire State Building.  Colossus is Cyclops’ perfect soldier, all year long.  But on the anniversary of the X-Men’s defeat, Colossus gets to lead a team into the Limbo controlled section of the realm and attempt to save Illyana.

On the fourth year, the X-Men got closer than they have ever been before.  This level’s boss fight is with N’astiah — Silver-tongued demon lord.  The X-Men on this mission are – Nightcrawler, Boomer, Cyclops, Jean, Beast and Colossus.

Jean uses her telekinesis to throw Cyclops at N’astiah.  In a counter attack, N’Astiah deeply hurts Cyclops.  This enrages Jean and it blows up the top of the building.

Colossus sees his younger sister, for the first time in four years.  Instead of being a baby, she is still a teenager.  Illyana plays sweet and innocent to get him closer and then she turns all types of evil.

Illyana converts to Darkchild, Illyana Raputin’s demon form, ruler of Inferno.  In doing so, she twists Colossus’ dumb arm so much that it is no longer functional.

6am – Colossus has been awake and his girlfriend, Domino, is now waking up.  I do enjoy the Colossus / Domino relationship, I’m glad that their relationship has survived into Secret Wars 2015.

6:01am – They talk about how tomorrow this the big day.

6:48am – Colossus is reviewing his former paintings of his sister.  Domino rather they used the room as a guest room or a gym.

11:45am – They fight Inferno-infused Omega Red.

Inferno.  Year Five.  X-Headquarters.  The couple, plus, Boomer, are excited about who the team and what supplies will they be bringing.  The X-Men have learned that they need to combined magic with technology, if they are to ever stand a chance.  Doctor Strange, Wiccan, Nico (of Runaways fame) and a fourth person, make up the magic side of the research time.

Colossus asks Beast about what tech they are bringing.  Beast doesn’t know how to respond.  Turns out, earlier, when the narration box states that Scott’s sacrifice was enough to set Jean off, they just meant his use of his legs.  Scott, of course, is in a hoverchair, just like Professor X, but he gets to keep his hair.  Scott says that last year’s price was too high and they are no longer going to do this.  Which seems like a dick move, to not tell Colossus prior to this day.

Scott also mentions how he is the baron of the region, which I’m surprised it isn’t Magik.  I imagine Doom can work easier with Scott.

Kitty, according to Marvel Database – but I agree it has to be her, but why she isn’t more interested in pursuing the rescue mission, or on the mission itself, is beyond me.  Kitty tells Scott that is is a dick move and he agrees to allow Colossus to go, but he is on his own and with any other fools who want to go with him.

Later.  Colossus, Domino, Boomer and Nightcrawler are in Inferno.  Kurt had to come to get them in and out of the dome.  They take out the first wave of demons, rather easily.  Too easily as thousands of demons come at them.  Boomer is killed by N’astirh – via arm through her chest.

Darkchild is thrilled to have Kurt, as a prisoner, as he can teleport.  I imagine, since Limbo is a place on Earth, that Illyana can’t teleport as she can’t access the other dimension.  Darkchild, her right hand demon and Kurt leave.

Colossus attempts to fight his way away from the demons.  The day is lost but he won’t know by how much until it is too late.  Domino starts being dog piled on by the demons.

The issue ends with Madelyn Pryor — Jean Grey Clone and Goblin Queen, arriving and has grabbed Domino.  With her is Alex Summers — former X-Man, current Goblin Prince and Queen’s concubine.  Which gives me an awesome Mutant X vibe, and I’m all for that.

This series seems to be about the darker aspects of Battleworld, and i’m all for that.  I can only imagine that Magik keeps playing a major role in the series, so I imagine I will be getting all of the issues and I can’t wait!