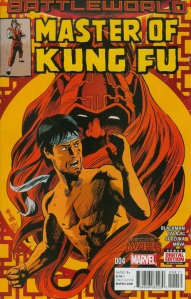 Issue opens with Shang Chi giving us his origin story.  Emperor Zu forged his heart out of the ebon blade, his eyes are made of infinity gems, his mind is a cosmic cube, he was baptized in in the River Styx.  Shang Chi was still born, until his father breathed the Phoenix force into his lungs.  His training was intense – If he wanted some water, he had to fight foes, every time.  Every night, was a terror.  Every playmate was an assassin.  He grew to be the greatest student. 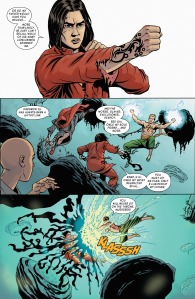 I like how, after three pages of amazing art – he just shrugs this off.  He mostly likely was born from one of Zu’s many women.  Why he is explaining this to Red Sai and Iron Fist, is beyond me.  Iron Fist comes at Shang Chi hard and fast.  He’s still upset that Chi killed his master. 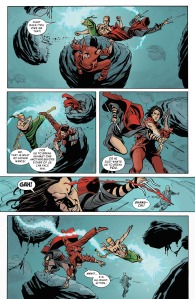 Shang Chi reveals Zu’s master plan, to have Chi and Iron Fist beat each other, so that they are weak for Zu.  Red Sai gets a cheap shot, as Red Sai’s blade slices Shang Chi’s forehead. 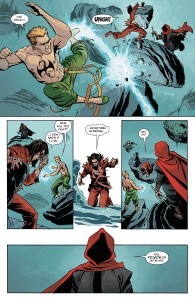 Shang Chi falls to his knees.  Red Sai states that the blade has poison on it. 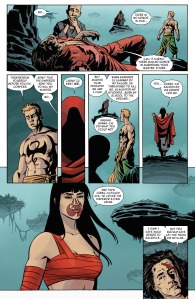 I can’t believe, that I didn’t see this reveal coming . . . Red Sai is Elektra!  She is the other most famous fighter in the Marvel Universe, who hadn’t been in this series.  Elektra was suppose to kill Tuan, the Master of the Iron Fist, but she couldn’t.  Zu threatened to kill her but Shang Chi stepped up and did the deed.  It is a pretty awesome reveal.  Red Sai, it was so obvious but I wasn’t thinking about it. 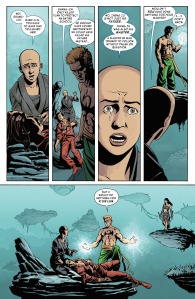 Kitten pleads with Iron First to heal Shang Chi, as he had no choice but to kill Tuan.  Iron Fist states that there must have been another way. 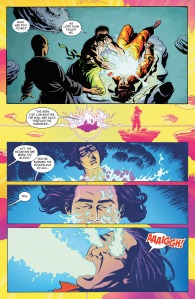 Iron Fist knows that Shang Chi is the best hope for K’un Lun, so he does heal him. 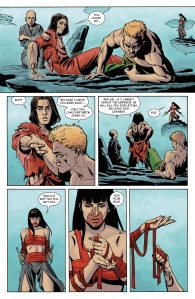 This drains Iron Fist, good thing he isn’t needed for the rest of the issue. 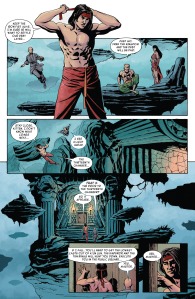 The fight between father and son, is rather intense.  The art team out does themselves here.  Neither Zu or Shang Chi hold anything back.  Zu makes the mistake of making fun of Shang’s new school, the Lower Caste (the X-Men).  This inspires Shang Chi to just wail on Zu.  There may be ten rings but he has learned an eleventh! 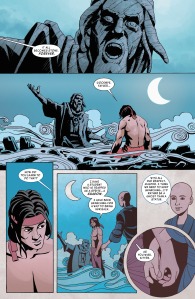 This new move is very much like Grey Gargoyle’s power, to turn a living thing to stone.  He has learned this move, so that he can turn Kitten solid, again.  As she is like a sprite, or a shadow.  Haden has worked all of Kitty Pryde’s nicknames, into one sentence!  Well, I guess, Ariel, isn’t used but that’s okay. 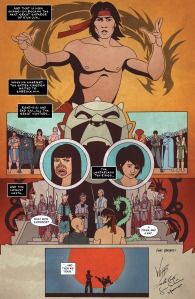 Issue ends with Shang Chi as the emperor.  This was a very great series, probably my third favorite behind Star Lord & Kitty Pryde and Years of Future Past.  Inferno and Giant Size Little Marvel AvX are up there too, I guess I just made a top five list.  The only other series I’m reading, thus far, is X-Tinction Agenda.

This creative team should be given a shot at the X-Men, or a Kitty Pryde solo series!

Lock shows up on the last page too!