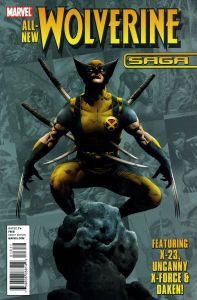 Retrospective of the Wolverine satellite of titles from M-Day to Second Coming, from Wolverine’s perspective.  Those titles are – Wolverine, Wolverine : Origins, X-Force, X23 and his son, Daken the Dark Wolverine.

The one we care about the most this the X23 section, as it mentions Laura’s involvement in Belasco’s attempt to bring Magik back in New X-Men : Quest for Magik.

So that makes this a keeper.

I must state though, that not really ever been a follower of X23 nor Daken, it was nice to be able to read what their deals were as we start with their origins and follow their tales up to the then present day.  Also, it gave me a chance to find out what that whole Romulus nonsense was all about in the Wolverine titles.

There is a list of trades in chronological order.  I can only recommend these ones :

Wolverine : Enemy of the State / Agent of SHIELD

Happy Memorial Day!  Thank you to all of those who served in the military and sacrificed their ultimate gift.