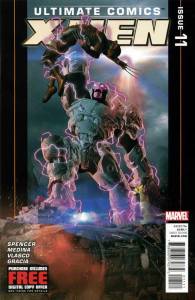 Look at that amazing cover by Kaare Andrews

I really like the Medina’s art this issue.  The Nimrod Sentinels look hard and mechanical and the people, especially the women, have a nice softness to them.  Marte Gracia is becoming one of my favorite Colorists as he really makes the issue pop.  Also, I imagine he is responsible for actually making the art look soft and real when necessary.

Prior to this issue, Kitty Pryde fought and killed Stryker.  By doing so, his consciousness went into the Nimrod’s so now they think like a mad man.  This issue opens with how the Nimrods are attacking various locations that are heavy with mutants.

One of the locations is Camp Angel, where Storm is the known mutant.  Nimrods are attacking and we get to see Ultimate USAgent, John Walker.  He doesn’t hate mutants, as he tries to rescue as many as possible.  Meanwhile, one of his soldiers are trying to get him to leave them behind as they are only mutants and he isn’t listening to that nonsense.

Storm wants to know why the government has sent the Nimrods after them and Walker tells her that it wasn’t them who sent them.

There is an ad for a Honda Civic, honestly who buys a car based off of seeing it in a comic?

At the White House, we see Val Cooper and a guy named Phil, who is freaking out over the situation.  We find out from Val that the Nimrods are attacking four states – Oklahoma, New Mexico, Nevada, and my home state, Arizona.  These are the locations of the mutant camps, the camps that once the secret that the government created mutants, is where the mutants were sent to.

With Stryker’s consciousness inhabiting the Nimrods, the robots have taken a religious flare reciting “His will be done.”  Val views the machines attacking the cities, along with the camps, as punishment for siding with these devil spawn.  Proving once again, that robots are the ones that are evil and destructive.  Show me one good robot and I will counter you with four evil ones – and usually of the same model.

Phil states that this is worst than the events of Ultimatium, which good for Spencer to not act like Magneto’s attempted world conquering didn’t happened.  It was more than 11 issues ago so he could not referencing it but since this title is still dealing with those ramifications, it makes sense to remind from time to time.  Since Magneto essentially flooded the New York City and ruin the world at large, afterwards, mutants were hunted on sight and sent to the camps.  Then once the government secret came out, things were not made easier.

Phil also asks if the Ultimates and Nick Fury can help and Val tells him that they are across the world dealing with their own issues.  I’m not even sure what that is referencing but it at least explains why they are not helping America at this point, but it is probably being bothered with Reed Richards turning evil and the twin countries of Tian.  Which I completely missed out on until Jean takes over that floating country and plays a larger part in Ultimate Comics X-Men.

Phil gets some pages and asks Val why the police, army and National Guard are not fighting the Nimords.  She tells him as they know it is pointless, they have already lost.

With that, we get an awesome two page spread showing Nimrods attacking – Oklahoma City, Albuquerque, Phoenix and Las Vegas, the city capitals plus Las Vegas.  Which I’m find with Phoenix being attacked, that means they are probably going to leave Yuma alone.  I have to choose my battles.

We get a couple pages of Kitty sneaking back into the Morlock Tunnels, which is their base for now.  The X-Men at this point are Kitty, Rogue, Jimmy and Iceman along with Human Torch, plus whichever mutants they could find on their way down to the sewers.

Kitty has bought the younger mutants, including Ultimate Maggot, bananas.  They were hoping for marshmallows but she bought them nature’s candy.  Which I thought was raisins but maybe in the Ultimate Universe, it is bananas, which I also like.  My favorite fruit, actually.  No idea why bananas can’t escape strawberries, so many other and better options.

Johnny wants some quite as the President’s speech, who is clearly President Obama but to try to keep this comic dateless, he is shrouded in shadow – which must have made it an awkward speech to watch.

The President tells of the Nimrods are no longer being controlled by the government.  We are told the death toll as of now is in the thousands.  That isn’t even the worst part.  The President straight up tells American that the Southwest is lost to the Nimrods and are no longer considered part of the country.  How crazy is that?  Is that really the plan if something like this happens?  Just give up the state and try to get the Americans out while we can.

I do like how this clearly changed the Ultimate titles for a bit.  Though I believe it was never really brought up in Ultimates or Spider-Man, at least Kitty is never named in any issues, so this is strictly an X-Men story.  But the landscape has clearly been changed and this can’t stand.

The President states the battle isn’t lost and tries to rally the rest of the country.

Issue ends in Arizona, where we see Nimrods heading home to a giant Master Mold that is also stating “His will be done” so something needs to happen and quick.

I had own this issue but for some reason, I didn’t log it into my comicbookdb collection so I had to consider it a back issue.

Back cover ad is Captain America riding a Harley-Davison.  Now that I know Cap approves of this brand, I am for sure to buy one.