Issue opens with Logan restating that Viper is his wife.  Or more precisely, that she is his fiance but it will be a very short engagement.

Logan’s lady friends are super upset, he’s going to marry a woman who just tried to kill them all.  Except that Viper wasn’t going to kill them, just set up Wolverine to maybe do it.  Kitty does seem to be taking it in good spirits.  Jubilee seems to be the most upset about the news.  Which is odd as she got off the easiest.  Though I guess she was hunted for the better part of the night so she is entitled to be upset.

Viper offers to have Jean and Psylocke prove that Logan isn’t being tricked into the agreement.  Since Viper is done answering questions, she begins to walk out of the room.  Kitty and Lockheed try to block her path but Viper keeps walking through the pair.

Jean is upset as no one can marry Logan but her, I suppose.  She likes having him be her safety if her current marriage doesn’t work out – which it won’t but we’re still years away from that. 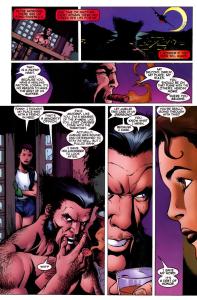 Everyone goes home as they are horrible friends and don’t want to be there for Logan’s marriage.  All but Kitty ends up leaving, as she’s his best friend.  Lockheed left with Jubilee, there’s a story I wouldn’t mind reading.

Wolverine explains the story of how he owed Viper a blood debt.  Seraph built the bar they are currently in.  A mission went south and Seraph allowed Sabretooth to kill her so that a Pre-Madame Hydra Viper and Logan could escape.  This is new back story.

As Kitty and Logan toast Logan’s upcoming wedding we see that Sabretooth has both Hydra and Hand goons.

Logan reflects on the Seraph adventure as Kitty comes into the room. 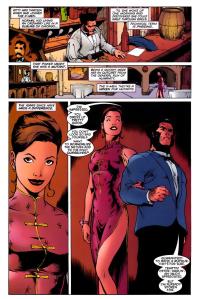 Since they are on Madripoor, Logan dresses like Patch, but without the eye patch.

For the longest time, if you Googled “Kitty Pryde” you were guaranteed to see her in the above purple dress.  The years have been very kind to Kitty, as she looks stunning in that dress.

Kitty tried to invite Tyger Tiger and Jessica Drew but they couldn’t be bothered to arrive.

Viper doesn’t look too bad herself but for the first time, I’m getting Poison Ivy vibes from her.  Probably as she usually wears full body suit, she has her own look and style.  Here, her bust is exposed just like Poison Ivy’s but it is her wedding day so let’s all just support her.

The bride and groom get to say their “I Do”s and the minister is killed.

Sabretooth is going to add another lady of Logan’s to his kill list but Viper isn’t any ordinary lady.  Viper would be pretty messed up if Kitty didn’t phase her in time.  Sabretooth lunges at Kitty but she straight trips him up.

Sabretooth tries to taunt Kitty but Wolverine tackles him.  Kitty narrated last issue and now Logan is narrating this issue.  I wonder who narrates issues 127 & 128?

This is the first Sabretooth v Wolverine fight since Logan lost his adamantium.

Viper is feeling all sorts of nauseous, even though Kitty phased her in time.

Kitty watches as Sabretooth and Logan fall into the ocean.  Kitty is piecing together both Sabretooth’s new fighting style and that one time she phased through Wolverine, back in the day.

Logan comes out, seemingly as the victor.  Kitty starts to piece it together, she knows that Sabretooth is play playing.

To late, Kitty screams that Sabretooth has adamantium laced bones.  He was purposely fighting Wolverine in a way that wouldn’t involve his claws or direct contact with his bones.  Sabretooth breaks Logan’s claws, one of these Kitty will keep in time for Wolverine 100 and will mail one to Logan in X-Men 109.

I’m pretty sure Kitty has phased through Wolverine dozens of times and have never been shown to be ill after phasing through Logan.

Sabretooth is about to finally end Logan when Kitty phases through Sabretooth and frees Logan from his grip.

Issue ends with Kitty pushing Logan over the ledge and is about to be killed by Sabretooth.  I do like how fierce she is, standing up to Sabretooth.