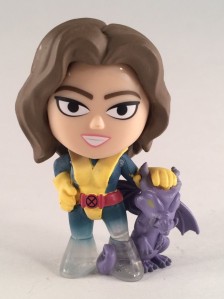 That is a narly looking Lockheed!  He’s like a gargoyle.  And look!  Kitty with transparent legs!

That is one sassy Kitty Pryde there, too.

I’m just glad to see something that has come out this year, that includes Lockheed. 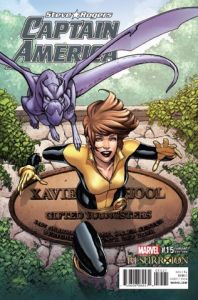 Captain America : Steve Rogers 15’s ResurrXion variant cover is the only place he can be found, in the past two years!  Also, I would like to get this variant cover as well!

The cover is by David Marquez.

According to my old pals over at ComicBookDB, Lockheed hasn’t been seen since

Groot (2015) 6, which came out in January 2016!  I’ve checked variant covers, as good as I could, and this is the only one he’s appeared in.  I’m not sure about dialogue but as of comics released in August 2017, Lockheed hasn’t been mentioned either.  I’ve been compiling a list from Marvel Database from July 2016, when Hastings closed, to August 2017 (I have to update it for September books).  It takes some time to look at all of the comics Marvel releases on a monthly basis.

So those four items are the latest we could see, besides shirts that I’m not sure were official or are fan made, it was hard to tell from how they appeared on Amazon.  I do like how Amazon has third party, including individuals, giving eBay a run for their money.