X-Men and the Micronauts 1 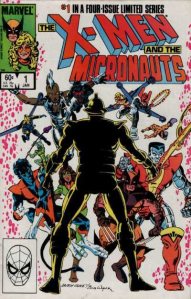 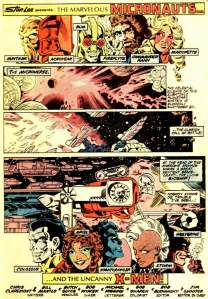 The X-Men are Colossus, Kitty, Nightcrawler, Storm and Wolverine – Kitty looks very pretty in the line up picture, like she is all dolled up.

The only Micronauts I have read is issue 37, of their series.  I am sure I must have been pretty confused by it as this issue is broken in two parts, first with the Micronauts and the second with the X-Men – and the Micronauts section is so confusing.  Maybe not confusing, as everything I need to know is fully explained, as it is co-written by Claremont, after all.  It probably more of an Issue of being interested, as I am not invested in their struggle.

This is what I know about the Micronauts, issue 37 has a guest appearance by Nightcrawler – that must have Kitty or Illyana in it, as I own that issue.  They are the champions of the Microverse, and they are the size of toys in RL.  Bug is their most famous member.  Bill Mantlo wrote every issue, and just like ROM – both were licensed properties.

Issue opens in the Microverse, the Micronauts are in their spaceship, Bioship – that looks like a toy from the 80s, like a poor man’s Transformers.  Bioship, kept looking like Bishop when I was reading this.  The Micronauts are on their way to a planet that is under siege – they were a peaceful farmer race and now they have become warriors.  There is a mysterious force that is making its way through this universe.

Bioship responds to Commander Rann’s thoughts, so he can make instant decisions.  Rann doesn’t want to take any prisoners, but it may be the only way to get any information about this mysterious force.  Then a Dog Soldier, a race bred to be warriors, is teleported onto the bridge of Bioship, this catches the team by surprised as Rann never made the call.

Turns out, Baron Karza made the decision.  He has a very interesting design, he is the toy on the cover with the four red circles on his chest.  In the panel that he is revealed in, he looks bad arse.  He is the Micronauts greatest enemy, so this alliance must mean that mysterious threat is that dangerous, which is a classic storytelling method.  We are told the mysterious force has taken territory from Karza.

The Micronauts join the fray on the planet against the Dog Soldiers, and Karza stays on Bioship.  He’s already lost two battles and doesn’t want to lose a third.  Karza keeps Bioship in reserve, it wants to join the battle but if they need to escape, he wants it to be easy to get away.

The mysterious force appears, known as the Entity, lands on the planet and is surprised the battle is still happening.  He resembles Xavier’s astral warrior form, which is interesting.  He is the gold figure from the cover.   He comes up against the Dog Soldiers and starts killing them with psychic attacks.

Karza has Bioship scan for survivors, it states there are a few but then the Entity turns his attention to the ship and Karza has it retreat as quickly as possible. 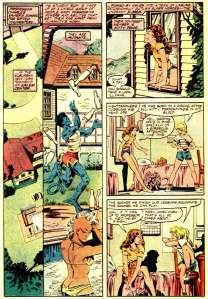 On Earth, we are in my comfort zone, which is nice as so are the X-Men.  We see Storm relaxing in the pool along with Kurt and Wolverine at poolside.  Kitty wants to join them but has school work from Xavier, which Illyana reminds her of it.  Kitty remarks that if Xavier had his way, they would never be done studying.  Kitty is not drawn here like she is on the first page, so she isn’t wearing any make up.  Lockheed is enjoying himself on the floor, by their feet.

Xavier, in the Danger Room, with the New Mutants minus Magma, so Illyana hasn’t officially joined that team, as she does so in issue 14, taking the name Magik.  Which is odd that they had her sit around the mansion, as a teenager with gifts, and never had her become a member.  She did go through an extremely dramatic experience in Limbo, so Xavier was probably letting her catch her breath.

Another odd thing is that Dani is referred to as Spellbinder.  A codename that doesn’t stick and is only slightly better than Psyche.  Mirage is a better name, but I usually refer to her as Dani or Moonstar, her last name. 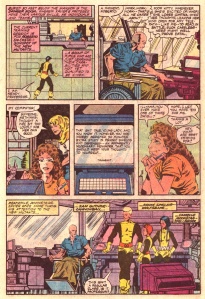 Sunspot is up first, as Xavier is doing their quarterly exam.  Which I like that they are at least trying to make the school feel like a school.  Xavier catches Kitty’s comment about him wanting her to never stop studying, he thinks to himself it is due to whenever she is too excited or angry, her control over her thoughts weakens, so any telepath can read them.  Which is an odd thing to have to live with, having to keep mental blocks up to prevent one guy from reading your thoughts.  Though, if I was Xavier, I would also punish the students for it as a mansion full of teenagers now, it can’t be easy.  So he punishes Kitty with 30 more minutes of psionic shields and defense studying, thus proving her point all along.

There is an explosion in the Danger Room and the New Mutants are thrown about.  Sunspot catches Xavier.  Karza is there, as he detected that the mysterious force is linked to something at the mansion.  Since Karza is in out of the Microverse, he is a size of a toy.  Cannonball recognizes him from the Micronauts toyline, which I am curious what the in-story reason of that.  Did the Micronauts come to Earth once, meet a toy designer, sell their rights and story to that company, and now there are toys based on them that Cannonball’s sister plays with?  There is a footnote I wish was offered.  Cannonball doesn’t name which sister it is who plays with those toys, but I can only imagine Paige is the only one old enough.

Sunspot assumes Karza isn’t a real threat and lowers his guard, and then Karza blasts his own hand off his arm and that hand goes straight for Sunspot’s neck, choking him out.  Karza is there to kill Xavier as that is exactly where the source of the trial lead.

Cannonball believes that they are only fighting a toy of Karza and not the real thing.  Which is another weird thing about the Marvel Universe, that that could be an actual thing.  Karza states that he is no toy and shoots Cannonball.

Wolfsbane and Sunspot, back in the fight, attack Karza.  Dani wishes she could help but her powers, at this point, are still only pulling one’s worst thoughts out of their mind and showing them.  Which she does, and Karza’s image is him back when he was a man.  Now he is energy contained in a suit of armor.  Karza turns it around and shows Dani her greatest fear, which is The Demon Bear.  Which is an awesome storyline in New Mutants.

Eventually the X-Men come into the Danger Room.  They didn’t have time to change into their uniforms so Storm is fighting a toy size threat in a bikini.  Karza recognizes that these new opponents are older and fighting as a unit.

Kurt runs out of the room with Xavier, as he is worried about turning him via a teleport jump as he wasn’t there to see the extent of the damage done to him.

Karza teleports himself to where Kurt and Xavier are, why fight the distraction when he only needs to kill his main target.  He takes Kurt out with a blast.

Kitty enters the Infirmary, finally done with her extra work and alerted to the battle.  She sees a toy and assumes that it is mechanical in nature and phases through it.  Which is a huge mistake as something horrible happens.  I do like how this is the fourth or fifth example, and there is plenty more to come, of Kitty thinking she is safe when she phases, or that her phasing ability can ruin anything mechanical, and she has to pay a price due to that assumption.  It shows that she still doesn’t know her extent of her power, plus it shows that even if she did, new threats don’t mean old solutions work. 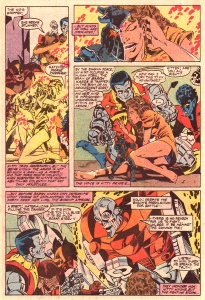 Karza and Kitty both scream in pain.  Karza’s armor is reacting negatively to her phase, and they are both stuck mid-phase.  What happens is that Kitty is knocked out, but now, her consciousness is stuck in Karza’s armor and Karza’s mind is stuck in Kitty’s body.  He is not thrilled to be in a teenage girl’s body.  Who would be?  You don’t want to be stuck in a teenage girl’s body during puberty or a pregnant lady’s body, ever.

Bioship finally makes its way to Earth, what they call the Macroverse.  He finally explains what is happening, Kurt references the issue above where he met the Micronauts.

Karza has been attempted to reenter his armor, but has control over it so that’s a small victory.  Now he is forced to act as Kitty but he has nothing to go off of except that she is young and she can phase thus ruining a warlord’s day.

Storm notes that Kitty seems to be acting differently.  Xavier can’t read Karza’s mind as his armor creates a psychic interference, which also causes him to not be able to read anyone’s minds in the room, so he can’t confirm why Kitty is acting strangely.  They assume she is still hurting from the bad phase attempt.

Xavier must be the source of the problem, or at the very least, is connected to the source, so the X-Men know they are now involved and have to help.

Illyana shows up with Lockheed, as the X-Men are getting ready to leave.  She asks if Kitty was going to say goodbye first, or if she wanted Lockheed to come along with her.  Lockheed sees Kitty and instantly attacks her.  Kitty is frighten of the dragon, more so of his nature than his attack, which Storm also notes.

I do like how Guice draws Lockheed with some muscle, he has pecs.  Cassaday did that as well, I like the idea of him working out or staying in shape as he’s surrounded by all of these other humans who do. 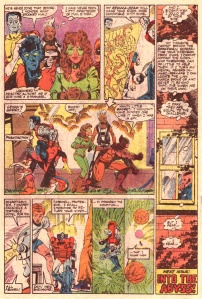 Bioship shrinks the X-Men so that they can board it.  For some reason, Bioship can’t shrink Xavier so he has to stay behind.  Once that is done, Bioship shrinks itself and promises Xavier that it will bring the team back as it found them.

Issue ends with Xavier on his own, left with his thoughts, as he is confused with what the source could.

Lockheed doesn’t show up again until issue four so we will be skipping the next two parts and heading straight to the conclusion!  But don’t worry, friends, this is co-written by Claremont so I’m sure we will get a perfect recap of what happened, in at least issue three but I imagine this being a miniseries, the entire three issues will be recapped.

One of these days, I will come back and do parts two and three but not during Lockheed Month.  I will have this problem with Secret Wars as well, as he is in parts one, two and twelve.  Kitty is thought about in various issues, by name, so I own a few of them.  Pretty sure I own all but issue ten, which I should buy one day so I can have a complete set as besides the first issue and issue eight, the rest of the series is pretty affordable.

Happy Presidents’ Day, Everyone!  Be safe out there!