Thanks to redditor, meatball_submarine, posting in this thread:

Any chance of more games like this? from untildawn

I have learned that Supermassive Games, the studio that brought us the incredible, Until Dawn, is working on a new series of games to be released next year.  Their first game is Man of Medan under The Dark Pictures Anthology label.

Thanks to Supermassive Games hosting their own trailer.

That looks super intense!  Also looks like Shawn Ashmore.  I just checked his Wikipedia page and that totally is!  He’s no stranger to video game likeness as he did Remedy Entertainment’s Quantum Break, the same studio that did Alan Wake.  A game I tried my best to get into but I wasn’t good with my flashlight / gun abilities.  Also, it was XBOX 360 exclusive and I barely played with that console.

Apparently, I’m like a month behind on this news but there isn’t an official Wikipedia page for the game yet either so I’m not the only one behind.

The imdb page only lists Ashmore as part of the cast.

When trying to find the link to the reddit page, I stumbled onto the Wikipedia page for Ourang Medan, the clear inspiration for the game.

I haven’t heard of that legend before, but I’m all in with it!

I like how it appears to be Until Dawn but in the ocean, I’m all for how different the two games are going to look.

I still need to get a copy of Hidden Agenda, Supermassive Games’ other game.  I had my hands on it at GameStop but put it down, like a dman fool.

As soon as I can preorder this game, I’m going to do it!  Also, I’m probably going to GameStop this weekend and getting me Hidden Agenda, I’m beyond hyped!

Unlike Until Dawn’s eight playable characters, this game will have five.  Which makes perfect sense as poor Emily and Matt were essentially just also-rans.  Five makes it tighter.  Also unlike Until Dawn, this will be available on PS4, XBOX, and PC.

All the games in Dark Picture will be horror centric, so that’s good to know that’s what the studio really likes to do.  Hidden Agenda is a detective story, as far as I know.

Like Until Dawn, lots of branching storylines and choices will be made.

They made the announcement on August 21, so over a month ago.

I’ve started following Supermassive Games on twitter and on YouTube, so hopefully I’ll be more informed as we go forward.

Here is the official website for The Dark Pictures Anthology:

The rest of the characters look like they can be easily based on people as well, time will tell.

I’m providing the imdb page mostly so I can find it easier in a few months.  Not like finding links online is that hard to do.

Here’s an interesting article I found about the game through engadget:

Thus far, Supermassive Games is committed to making four games in the Anthology.  I suspected it’ll be more than three games, as they would have just called it a trilogy.

Once they game comes out, another one will come out every six months, which seems super tight for a deadline.  I’m sure they have massive teams just working on each one.  Each game takes place within the same universe, but most likely not interact as you should be able to play each game in any order.

So that’s going to get expensive but I’ll have to start saving now.

Each game will focus on a different sub-genre of horror.  So we’ve gotten the cabin in the woods story, plus that was in winter time, Man of Medan appears to be a sudden ship / treasure hunting / possibly ghost related, in the summer time.  Until Dawn was a PS4 exclusive, I wonder if they can release it wide now (it came out in 2015) and put that under the Dark Pictures umbrella.

Aaron Souppouris wrote the article and got to play 15 minutes of the demo (so lucky!) and gathered all of the information.

The game is supposed to be around five hours of gameplay, so half of Until Dawn’s length.  Which makes sense as I was envisioning it being like TellTale’s Batman or Life is Strange, where those had five episodes, and I wonder if this series will have that same interface.

It uses a different engine than Until Dawn, but the games look similar enough that I’m sure there won’t be a dip in quality.

Hopefully, the game won’t be $60, I bought Until Dawn for $20 but I’m not sure how much it cost when it first game out, most likely $60 but I’m committed.

I’ll try to keep up on the story and let you know what I know so if you read something, please let me know!

This is way late and many dollars short!

I keep not finding this photo on my phone, as I have loads of pictures, and every month, I keep saying I should just make a post so I can find it easier online.

I so look forward to the first Saturday of every month as it is our father son project we do.  Walker Dennis has come a long way from essentially me doing the entire project by myself and him providing some commentary.  Now he has gotten great with hammering the nails, I’ll feel better if he would keep eye contact with the nail but he’s great about stopping now.

Buddy, the nice gentleman who oversees the project, is always a delight to see and he recognizes us.  In fact, there are several employees we have gotten to know as we walk around letting the project dry, and it really is a lot of fun.

Hopefully they show us the image for 2019 and I can make this post much earlier.

I got confirmation that Scarlet Spider is going to be in the upcoming (September 7) PS4 exclusive, Spider-Man title!

Tom Lyle designed the Scarlet Spider costume that debuted in Web of Spider-Man 118 and I’ve been a giant fan of it ever since! 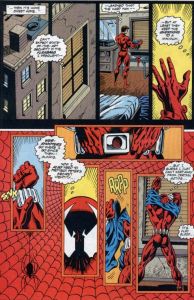 Apparently, if I had followed Game Informer, I would have been aware of this when it was happening live.

The article implies it is unlocked with three Crime tokens and two Landmark tokens.

The Scarlet Spider Suit is Fucking Beautiful from SpidermanPS4

YourHostEdge confirmed that at level five, the costume unlocks so I can go around rescuing balloons and collecting collectibles until I can get the costume and then make that my main costume.

So maybe it is a combination of being level five and needing five tokens.  Now that I typed that, I wonder if adding the tokens together for five is what is throwing off the being at level five but time will tell.

I made the mistake of looking it up but this totally exists!

Look how cute that is!  Funko really knows how to sell these!  Scarlet Spider was a Walgreens exclusive that I had in my hands but decided not to buy it at the moment.  Which is silly as I know the greatest commandment is Thou Shall Not Hesitate but I did and now I lost out.

I do own this Scarlet Spider bust 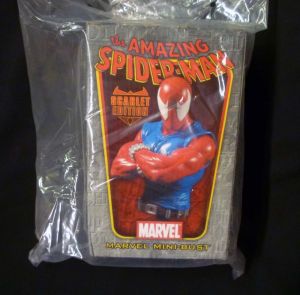 I also own a proper action figure of his but I can’t seem to find it through an image search, at least, mint on box.

It looked like this but this one looks pretty new still.

I just really liked Ben Reilly as a character and I really need to check back into his adventures now that he’s back, and he’s been back for a while now too.

His Spider-Man costume looks pretty great to me too.

I probably won’t be able to buy the game until it is around $30 but still, I’ll add it to my wishlist!

Something else to look forward too!

Here is the costume reveal trailer –

Thanks to YouTuber Caboose for hosting the video.

I like how the suit’s power is to create decoys, or “clones” if you will.