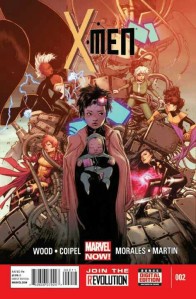 This creative team is really knocking it out of the park!  I got the Coipel cover and added the Conner variant to my wishlist.

I have been a fan of Coipel’s since House of M, which was pretty awesome.

Like most people, Laura Martin popped for me during Whedon/Cassaday’s Astonishing X-Men run.

Wood has one more issue to give us a Coipel drawn Lockheed, which hopefully is coming.

Wood is going to go the route of Whedon/Bendis/Aaron and only give their artist the “only every other three issues” rule of letting Lockheed appear.

Coipel is definitely rocking a new style in these issues than I am use too. I really like it, not sure how to describe it.  I want to say it is a more mature style but that isn’t quite it.

Wood gives us one of the first interactions between Kitty and Rachel in a while.  They have been in the same panel panelbefore but they don’t really ever talk to each other.

The Colorists make a decision to make the comic look darker on certain pages that really compliment the art.  Such as the page where Rachel and Psylocke are interviewing Sublime.

I also like how adding a baby is an easy way to age Jubilee and add a new generation of mutants as we all know that these characters can’t age so we have to give them babies in a different way.

I also like how this isn’t a six part story, as it feels like we are really moving and the stakes are high.

I have no real connection to Omega Sentinel, outside of Carey’s great run on X-Men Volume One and the Facebook game: Marvel Avengers Alliance, in which she is quite impressive.

Hopefully no one dies from the bomb.