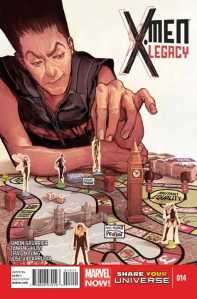 I bought this issue as there is a panel depicting all the people Pete Wisdom has lost, as David Haller, Legion, is making him see it.  In the panel is Nightcrawler, Maureen, his mother, Kitty Pryde, and John Sublime.  Now I know what happened to everyone but Maureen and his mother.  I take it that he lost Maureen some time recently.  His mother, I will have to assume that this is the Marvel Universe and he lost her a while ago.

I have liked Pete Wisdom from very on. I am not one of those guys who despise Wisdom.   No, I fall more into the Can’t Stand Colossus camp.  As far as former boyfriends of Kitty’s go, I would have to rank them as:

Shame that Alistaire Stuart, Doug Ramsey, heck even Shan Coy Mahn never got off the fround.  This is why you will see Marvel keep throwing her back to Colossus all the time, there is no one else.

Which is something I have never understood about television series where the first dame we see the main male character fall for, we have to cheer him on his quest and once they break up, we want them back  together.  In RL, people date other people all the time, and we don’t pine for former loves when there are other options.  But with television series, it feels like there is only ever the first option we see.  It’s just odd to me that our entertainment wires us like that.

Back to the issue, the comic has two moments I really like and have read a couple times now.

The scene where Haller, he doesn’t like being called Legion anymore as it is pretty insulting to someone with his disease, explains the threat at hand.  There are dozens and he explains it via which characters are located where in Britain and what they are going to do.

The follow up scene where it pays off and you see that these heroes do basically do what Haller said they wouldd do, but with hero twists to them.  As that is what they do, they are heroes.  By doing so, they make England more tolerant to mutants.  Which is nice.

The heroes are: Lila Cheney, Psylocke, Chamber. Pixie, Alchemy, Liam Connaughton (who I don’t know, but he blows things up by just thinking about it), and Pete Wisdom.

Issue ends with David’s mother going to appear next isue.