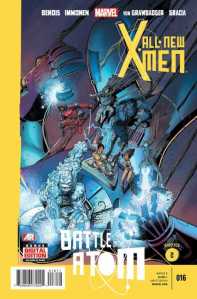 Battle of the Atom Part Two of Ten

Immonen’s layouts are stunning this issue.  He uses these “not quite” double page spreads, 60% spreads, I will call them, and they are amazing.

I like Hijack calling him Dr. Magneto and the location as a bunker.  Shows how new to this he is.  Him also not knowing which Cuckoo he is speaking to, is a nice touch.

Cyclops and Triage have a great conversation.  It must be uncanny to be able to heal with only your hands, but to bring back the near dead, changes your game.

That opening is all we get from the Uncanny crew, the rest of the issue is with the Jean Grey School and its cast. 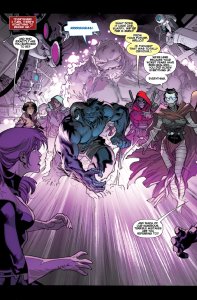 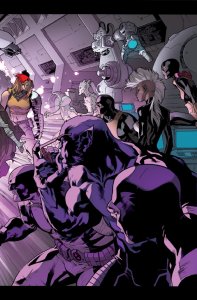 I really like the reactions of our cast to the Future X-Men.

I like that it is both Iceman and Beast, who have three counterparts for each time period.  One to make jokes and the other to appreciate it.

Both Icemen are blown back at their future self.  He is an Ice-Hulk, maybe he will be able to speak down the line.

Future Xavier, I wonder if he will be Legion and Blindfold’s son?

Really like Wolverine going around and stating who people are, confirming with his senses.

Future Beast, has only one horn and walks with a cane.  I imagine that he is like Yoda, and has a cane but is still quick in combat.

Past Beast, if he is smart, should never start experimenting with his powers, or drink any potions.

Our Kitty makes a great joke to Storm about moisturizing, even better response by Storm.

Future Deadpool pushes Future Kitty aside to kiss Wolverine on the cheek.

There is a big moment reveal with the Future X-Men being in the present but it is being handled with some humor that I really appreciate.  Yes, it is crazy, but this is the X-Men, they deal with crazy all the time.  Plus, the Future X-Men did not start off by throwing punches, so that helps.

I wish the Molly Hayes interaction with Wolverine was better.  Maybe he just didn’t want to realize that little girl who has knocked him out, twice, is now all grown up.  I don’t believe Runaways have a current book now, with a few of them being involved with Avengers Arena, but I want current Princess Piwer to meet Future Bruiser.  Bruiser still has a thing for hats, that is an awesome addition to the character design, I wonder who should get credit for that?

I was thinking maybe they can do it like Mutant Massacre, and have a special one shot that has the two meet, that is not part of the saga proper, but takes place during it.

So a huge fight does occur, naturally, due to a misunderstanding.

They notice too late that Jean Grey is missing.

Two minutes ago, Jean was having a telepathic conversation with Past Beast, she wants to get out of there and he wants to witness this great moment in X-History.

The page where he tells her, no, is breathtaking.  Immonen’s art looks better when it is blown up, he puts so much detail on his close ups.

Of course, once Hank says no, she still wants to leave and changes targets to Scott.  Even more of course, Scott agrees so fast.  I wonder if she will even tell him about the kissing she did with Hank?  It clearly didn’t mean anything to her, she was just hoping to change her own future.

Kitty and Kate both say “oh no” at the same time, makes me smile every time.  Hopefully Lockheed gets to meet Kate at some point in the next eight parts.

Scott and Jean steal the Blackbird and are off to who knows where, and abandon it on a beach so they can start running.  This is what Battle of the Atom is going to be about, getting these two back to their proper timeline.

I like that Jean has a plan to make sure, if they do go back, that she won’t let Xavier mindwipe their future adventure away.

Back at the school, Rachel Grey finally shows up.  I know this is clearly a different future than the one she is from, but I so want it to be quasi  the same one so we can get some Kate / Rachel moments.

Rachel confronts Lady Xorn, and that reveal is pretty awesome and shocking.

Great use of two pages of ads, so you got that extra second of a pause.  I know Bendis uses ad space like that in the past, so I imagine he did the same here.  Great use iof production.  What ad I can’t stand at the monent, the Treasure Hunters by James Patterson full page.  No kids are reading these comics, thus it feels pretty insulting to advertising so geared to children.  At least balance it with another ad for a novel or something.  But I guess I also never understood car ads in comics either.  Who reads a comic, turns to a car ad, and walks up to their spouse and says they need to buy that car?    I guess even if three people did buy a car, that would be worth it.

I didn’t catch that Lady Xorn was an older version, at first. I thought she was the same person, but on a second read, I noticed that she leans down to kiss Rachel’s cheek (two of those in one issue!) and that  she is the same height as Storm.  Missed those the first time, but what a great job to show the growth of the character.  Growth and age.

She references a promise Kitty made to her and I can’t recall what it is.  I want to say it was something along the lines of, the Original Five could stay in the present until it got too dangerous, and then they will go back to their proper timeline.

Issue ends with a guy listening to a radio station about to play Dazzler’s top ten song, nice to know she at least got one hit.

Looking at the checklist, I really like that for the next eight weeks, only one part is coming out each week.  Making each issue, an event.  That makes for a great schedule.  There are non-involved X-titles coming out during that time, but for this storyline, only one per week.  I fully support this.

This is our 75th post!  Thanks for all of the support!