Battle of the Atom Part Three of Ten

I really like how each chapter leads into the next title’s involvement.

Rachel Grey walked into the room, last chapter, now it is X-Men time.  This issue ends with the Uncanny X-Men showing up, and the next part takes place in Uncanny.  That is a very smart way to do a segue.  Plus, if you were not interested in this saga, this issue still serves as an issue of X-Men.

We get the explanation of why Future Jean is wearing the Xorn mask. 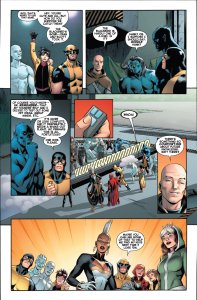 I don’t care for Future Kitty is still referred to as Kitty.  I guess they made the decision to make sure people are not confusing these future X-Men with the Days of Future Past X-Men.  They are from two different timelines.  Their future timeline is probably going to be known as the Battle of the Atom Future.  DoFP and BotA timelines.

I am still going to call her Kate, as that is an easier way to distinguish the two Prydes.

They do that thing I don’t like with future characters, where Future Beast states that The Dove is his masterpiece, like really?  In the next twenty years, you don’t create anything worth a damn, and it is all down hill from here?

Storm tells Kitty and Rachel to hang back as nearly everyone else is going on the mission to get Scott and Jean back.

Scott and Jean steal some clothes.  During this scene, is when I start really noticing the art.  On the top page, where Jean is trying to cover up, Lopez (probably) draws her like she is fifty, and in the middle of the same page, she looks attractive again.  Like, the panels that are just her face, are nice, but if he gets a chance to draw anything else, he rather do that.

Then in a few panels, like the away team is existing The Dove, he straight up doesn’t drae any faces!  They are as blank as Blank from Dick Tracy.

I like the idea of Cerebro as a pill.  Not sure what it does for your digestive system.

The home team is probably my favoite part, or any scene with both Kitty and Rachel.  The art team and Martin on colors, really went all out at the mansion.  I really like  Rachel’s hair style here, have no idea what it would be called.

The ladies want leftover Chinese, and then you see them have fifteen cartons out! I don’t know why more Chinese restaurants don’t label the cartons better, especially with larger orders.

Really like Kitty’s point of how she believes the Original Five need to go back, but it has to be their own decision.  This is now the driving force behind the series.

Really like that someone realized that Rachel did the exact same thing, time travelled and stayed in the present.  But it is different, as we now know that if something horrible happens to the Original Five, their present day selves are affected.

This issue is probably going to be my favorite issue of the year, topping All New X-Men 14.  So much happens in this issue, Kitty is crucial to the story, art is really good.  It is a great issue.

Scott and Jean take on ten X-Men, and hold their own.  Pretty impressive.

Kitty and Rachel come and break up the fight.  This might lead to Kitty joining the Uncanny team, which would be a big get for Cyclops.  Plus, if Rachel comes too, then those two will be on the same team as Magik, for the first time ever!

That panel where Kitty says “and you Wolverine–” his face is perfect!  He really is only tagging along on this quest, he is letting Storm and the Future X-Men take the lead here.

The next part takes place in Uncanny, and it promises to be good.

Lopez makes Magneto in White, look good.  It is not an easy task.  The shade helps a lot.