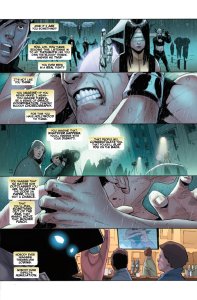 Maybe to much with the caption boxes, though it is written well.

Magik doesn’t do much this issue, besides stand around, then she drops her sword, which will be important for next issue.

How great is the fight Pham shows?  That is the moment of the issue

Cyclops, has to be holding back during the fight.  He knows how much David needs this.

I like the idea of the news commentators, they strike me as local newscasters and then the nation just picked up the story.

From there, Cyclops stops holding back and clearly wins the fist fight.

Cyclops tries to blast David and hits Tempus, unleashing the new mutant who absorbs flesh.  She absorbs David and Blindfold’s brother shows up at the end.

Looks like the Uncanny cast will be around for one more issue.

One imagines that the next issue opens with Triage wakes up Tempus, she freezes David as the worm, then Triage separates the two of them like how they did it last issue.

But I imagine now that Blindfold’s brother is there, things are going to be more complicated.