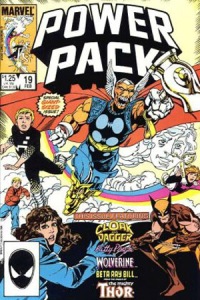 Look at that sweet Kitty Pryde logo!  Shame she doesn’t get to use it more often!

Celebrating this year, we get a giant size issue of Power Pack!

Julie scolds Katie for running off on her.  They are trying to get home in a hurry to see their father before he goes to the hospital.  They activate their powers so they can get home fast, in order not to miss the Macy’s Parade.

We cut to Beta Ray Bill bringing Franklin to the park.  We also discover that if Bill was given an enchantment by Odin that he can make himself look like a human – which must be insulting.  Franklin makes a reference to Thor 363, where Franklin, Bill and Thor saved the day from Kurse – along with Power Pack, going as far as saying if his dad, Reed Richards, was there, he would have saved the day on his own.  Which is nice, as we never really see Franklin liking his father, besides the few times it is forcibly shown.  This must have been during the time when Reed and Sue were members of the Avengers as Bill references Jarvis letting Bill bring Franklin to dinner.

We cut to the Powers’ home, and see the brothers, Alex and Jack.  Alex is in a sour mood, as their father is going to the hospital to visit their mother who is a patient.  Apparently, their mother was hurt by Kurse while buying science project materials for Alex, so he is feeling guilt from that.

We cut over to Cloak and Dagger.  Cloak eases up on a punk as it is Thanksgiving and they are missing their families.  They only have the two of them.

The daughters run into their father as he is heading out.  Julie really hopes their mother gets better.

Annalee and Leech are preparing a sweet potato casserole.  Yum!  This is after Mutant Massacre as Annalee’s children are dead.  In Uncanny X-Men 195, Katie made Annalee her special grandmother.  Must have been to make her feel better.  I forget how much of a ripe bastard Annalee is.  She says horrible things to Leech and then stuffs him into a closet and locks it so he can’t ruin her time with Katie.  Leech’s cat looks so sad outside of the closet.  Poor Leech.

Back at the Powers’ apartment, the phone rings and Katie dashes over to it.  Only she has been allowed to answer the phone for a week now.  Kitty confirms they will be there after the parade.  Alex is getting suspicious.  On top of Alex’s guilt, he was mean to his would be girlfriend Allison and she has not tried calling him back. 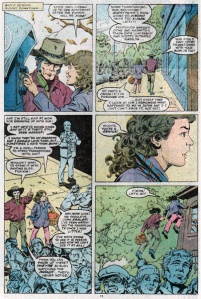 We transition to outside where Logan and Kitty are heading to the apartment.  Kitty lets us know what has been happening to the X-Men.  Xavier is gone.  Magneto is leading the team (so we are definitely after issue 200).  Scott betrayed Madelyne.  This is after Kitty Pryde and Wolverine miniseries as she has forgiven her father but every time she sees him, she remembers what happen to her in Japan, which was a lot!  Her parents are definitely divorced at this point.  This reminds me that we haven’t seen Theresa in forever, at this point and definitely present day.  Haven’t seen her, or really heard from her, since that one late issue of Excalibur where Kitty was on her way to visit her and had to cancel to save a family.  Especially now that Carmen is dead, you would think she would have seeked out her mother at one point.

Back with Leech, I have forgotten that he speaks in broken word balloons.  Luckily, Ape comes along and notices the cat and frees Leech.  Go Leech, save Thanksgiving from Annalee!

The phone rings and of course, Alex ruins everything with answering it and over reacting!  Katie confesses her goals and how she tried to get Cloak and Dagger as well as Spider-Man to come as well.  Julie joins in on raining on Katie’s plans.  Katie runs off crying,m Alex runs off because he can’t handle his emotions.

We cut to outer space.  A horse alien, Kofi, flying a ship, Friday that can speak!  Kofi is from the alien race that gave the Powers children their … uh, powers.

Alex in his temper tantrum, runs into Cloak and Dagger.  They make Alex realize that he is one silly kid and it really Cloak and Dagger that have real problems, both in their past and their current state.

Katie runs into Franklin and Bill as the Smokey the Bear float.  Only you can prevent fires!  and me!

We see the Kermit the Frog float.  Once thing I will never understand about that frog, is what is he holding out for?  Why won’t he just marry Miss Piggy?  He will never find another lady like her, she’s everything one would want in a lady.  Sassy, demanding, and full of confidence.  She rates off the Sassuality Chart.  Which of course is a woman’s Sassiness mixed with her Sensuality.

Leech gets scared by the Kermit balloon and runs into Annalee.  The Kermit float gets tangled with the Smokey the Bear float.  Jack and Julie save a small boy who is tangled in one of the balloon chords. 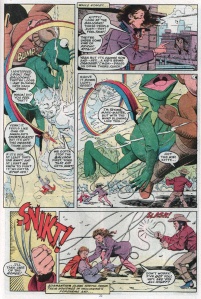 Kitty runs over to the boy as well, and really saves him.  Wolverine cuts the balloon chords to try to save the parade.

We see the Tasmanian Devil float.  We cut to Snark World, the Snarks (they look like crocodile people) are one of Power Pack’s arch foes.  They may be the horse people’s greatest enemy, I don’t know.

We see the Mighty Mouse float.  At this point, the parade is way out of control.  Now it is Beta Ray Bill’s turn to save the parade.  Alex with Cloak and Dagger notice the panic from the ground.  Power Pack reunites. 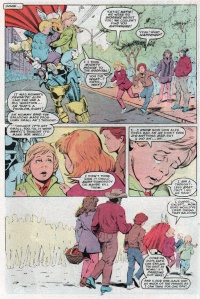 Everyone heads over to the Powers’ apartment.

Wait, only Katie was reunited with her siblings.  Alex reunites with Leech and Annalee – who is still being horrible to Leech.  Leech proves he is better than her by caring about her, but it wouldn’t take much to be better than Annalee.  Cloak and Dagger look disgusted by Annalee’s actions. 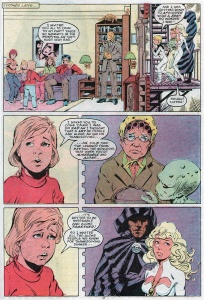 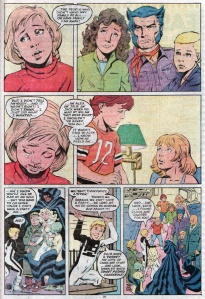 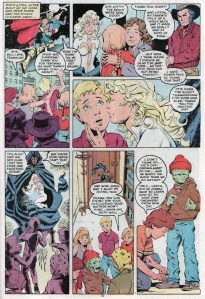 We skip out on the actual eating, as who needs to see that.  Beta Ray Bill is the first to leave the party.  Next, Kitty and Wolverine.  Kitty made rolls.  Kitty gives Katie some advice about parents.  Then Cloak and Dagger, after Dagger gives Alex a healing kiss on the cheek.  Leech gets a nice outfit and he and Annalee leave.  I believe we see Leech wearing that same outfit like a bunch of times after this.

Mr. Powers comes home.  His wife isn’t doing any better.  The kids are just happy to see him home again.  Their uncle is coming from Japan tomorrow.

Next issue, promises the New Mutants.  I don’t own that issue so Magik must not have been there.  I just checked comicbookdb and only Cannonball, Wolfsbane and Dani show up.  Which is three members so that’s enough to bill it as an appearance of the team.

The back cover shows that Secret Wars II issue 8 is coming out, so that is happening.  Uncanny X-Men 203 is the tie in that month.  So it is before Mutant Massacre, so clearly I don’t know when Annalee’s children are killed off.  From the checklist on the inside back cover, X-Factor one is coming out so the Original Five X-Men are going to be reunited again.  Also tying into Secret Wars II issue 8 : Defenders 152, Avengers 265, Fantastic Four 288, New Mutants 37, and Amazing Spider-Man 274.  I just own issue 8, Uncanny 205 and New Mutants 37 of this lot.  One day we will get to these issues.

Happy Thanksgiving Everybody!  Hope you all have a nice and safe holiday!