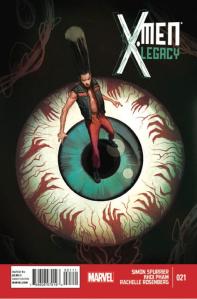 I couldn’t get my hands on a copy of X-Men Legacy 20, I see from comicbookdb.com that Magik shows up in that issue, though I have my suspicions that whoever copied the character list from issue 19, didn’t edit characters out but I can’t get confirmation one way or another.

Thus, I have no idea what happen in the previous issue.  From the recap page, Shadow Phoenix (there is probably a better name for the entity) lay seize to David’s mind and he merged several of his personalities into his main one.  Turns out, there never was a Shadow Phoenix, Aarkus the Aetheric tricked him into taking control of his own mind.

Issue opens with the merged entity consisting of Blindfold’s brother and the Xavier personality from David’s mind that escaped.

We see David losing a fight to this merged entity.  The entity is punching David over and over again.  We see characters in the background, such as Iron Man and Captain Marvel.

Inner David looks bad arse with how he is multi-colored and fiery hair.  He is gathering the smaller personalities easily but the bigger ones are keeping to their own.   Ruth tries to encourage David, but she wants to work with him.  He is distracted with trying to become whole.

Pixie comes by Ruth’s room and try to check out on her.  We see that David is at Ruth’s bedside.  Then he goes back to his fight.

Then we get this great moment when the entity reveals that due to the way it was created, that he sort of works as David’s son.  Except that he doesn’t have any daddy issues that hold him back.  He also doesn’t care about those he hurts in this adventure.  So not only does he not have daddy issues, he isn’t trying to redeem himself either.  He is pure power. 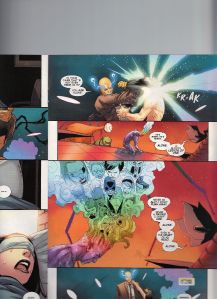 David’s ‘son’ punches him in the head, and we get the panel that got me to buy the issue.  Within this character bubble, we get : Magik , Abigail Brand, Beast, Magneto, Doop, Cyclops, Storm, Emma Chamber, and Wolverine.

“Son’ doesn’t have any master plan or anything silly like that, he just wants to kill as many as possible before it ends.  That’s a villain that can only be stopped by death.