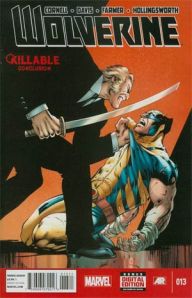 This issue boils down to two big speeches.  Sabretooth’s disappointed speech and the Virus’ plead. 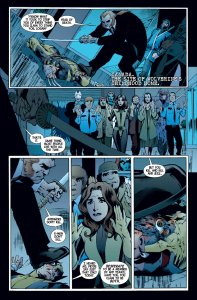 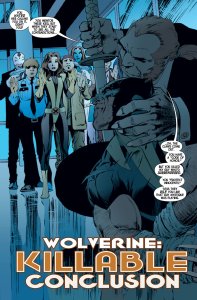 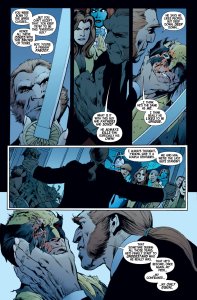 Sabretooth wants Wolverine to be better, and to stop lying to himself.  Makes great points regarding how Avengers and X-Men, typically don’t kill, yet Wolverine does and while as a member of those teams.  Sabretooth starts call him Jimmy and such, which is what I did for a long while on message boards – people did not care for it.

Kitty can’t do anything with Mystique and the Hand Elite Guards standing around.  There is a panel where you see Wolverine’s mouth agap, and it reminded me of Christian Bale in Batman Begins, when he gets a faceful of Scrawcrow’s gas and is calling out for Alfred.

Once Sabretooth, still in that fine suit, is done with his monologue, I like how he gently places Wolverine’s sword on the ground.  Sabretooth and his team teleport away.  Kitty hesitates, letting all of that truth set in.

Kathy, the security guard, is possessed by the virus that turned Wolverine’s healing factor off.  SHIELD’s plan for destroying it, is working and it is desperate to live.  I really like how it goes into why Wolverine should take the deal.  Even mentioning why he shouldn’t.  This entire time, during the two speeches, Wolverine hasn’t moved from his spot on the floor.  If he accepts, he will have his healing factor back.

Wolverine turns the virus down, and it dies.  He slowly pulls himself up, while Kitty helps Kathy readjust.  Wolverine picks up the sword and breaks it.  Uatu the Watcher is seen watching.  I don’t feel this was a big enough moment for that, might be the reason I didn’t care for this issue as much.  Cool to see Uatu drawn by Davis and Farmer.  The two panels of Kitty looking at Wolverine, pretty haunting.  Will be interesting to see if we get a slew of What Ifs this year, but I doubt it.

The two of them get back to the mansion, Storm runs to him.  He tells her Wolverine is dead.

I guess this was suppose to show why Kitty leaves Wolverine’s side at the end of Battle of the Atom, but coming two months later, does not help matters.

Thus ends Volume Four.  Volume Five starts immediately, and with the same writer, so really it should be issue 14 but whatever.  Wolverine gets a pair of gauntlets with fake claws, a gun and a new padded costume – which is yellow but mostly black.

Before buying this issue, I really thought it would knock Savage Wolverine 13 out of its top spot but it didn’t.

Expected to buy at least two comics that ship this week, maybe four.  We will see what happens to the list then.  I probably won’t keep tracking the list on the blog as it probably won’t be that exciting, but I figured I will until I at least have ten comics listed.