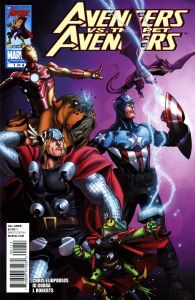 Now, I’m not sure what I was doing at the end of 2010 that I didn’t get this series initially as if the words “Pet Avengers” was in the title, I would have instantly ordered it.  So I only have the first two issues, that I had to buy through back issue.  There are four parts, and sadly, I don’t know what happens after the second issue.  One of these days, I’ll buy the last two issues.  For reviewing sake, I will only be reviewing issue one.

This is the third part of what I suppose is the Pet Avengers trilogy.  I imagine that Pet Avengers Unleashed didn’t do the numbers they were hoping for so this miniseries stars the Avengers proper along with the Pets.

Which I like as now the Avengers cannot deny that they have a pet division in their monthly team board meetings (that I can only imagine a businessman like Stark would enforce).  One would hope Lockheed would be the official representative but it most likely has to be Throg as he’s the one people can understand.

This is the third miniseries for Eliopoulos but they do show up in Alex Zalben’s Thor and Warriors Four (a Thor / Power Pack miniseries, that I’ve covered issues one and four already – the only issues the Pet Avengers showed up in).

Sadly, there has been no other Pet Avengers miniseries, to the chagrin of all of us here at S&FwM.

Issue opens 4500 years ago, give or take a decade.  Humans annd dragons lived at the same time.  Until humans went and fouled it up.  So the dragons started being killed.  Which holds up with Claremont’s New Excalibur adventure when the team went back in time.  All but one dragon was killed.

A kind man tricked Fin Fang Foom into drinking a portion, causing him to sleep for thousands of years.  I haven’t read every Fin Fang Foom tale, buy I do enjoy the character.  I like how even 4500 years ago, he wore his purple shorts. 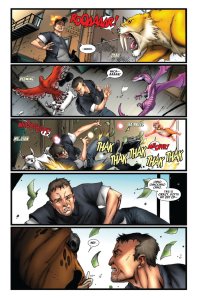 Throg has to do the talking.  The guy is surprised he can talk, opening Throg for an awesome response.  “I can do more than talk, base villain . . . I canst call down the lightning.”  I am sure it is the usage of ‘base villain’ that I like so much.

The shop owner is so happy to get his money back, that he gives them a bag of candy.  The police officer can’t believe there are superhero animals.  The shop owner has been in business in New York City for fifty years, he isn’t surprised at all.

Hairball tries to get Ms. Lion to eat some chocolate.  He really wants it but Lockheed has heard chocolate is bad for dogs. Lockheed talking to Hairball, this whole sequence – really amazing how Guara really gets into drawing these animals.  He doesn’t half arse it, like one might think an artist working on a title like this, might do.  A great amount of detail is placed in every panel and each animal is distinct.  Guara knows this is an awesome comic, that he is spectacular with the art.

I know the target demographic is probably far younger than 32, and even if Lockheed wasn’t part of the team – it really works as an all ages title.

Redwing wants them to leave the park, as their presence is upsetting the humans.  Redwing also wants to get back to Falcon, as they have a special bond.  This annoys Hairball as Redwing can’t go too many minutes without mentioning how he works with the Falcon.

Then Throg gets summon by Thor to go help him, Iron Man and Captain America.  Once Redwing hears Cap’s name, he instantly mentions how he knows him from when Falcon teams up with him.  It is a very fun running gag, especially with how mad Hairball gets.  But when your human partner is the New Warriors’ Speedball, you don’t get to brag as much.  Especially after Stanford.

The Pet Avengers are heading to an island in the South Pacific.

Once the Pet Avengers meet up with the Big Three Avengers, we see they have been turned into frogs!

I like how Bucky Cap has a metal arm even as a frog.  Thor as a frog is mostly standing, which is the only way to tell him apart from Iron Man as a frog.

If it wasn’t for the cover, we would never see the human Avengers as their proper forms.

Fing Fang Foom and his army of dragons start attacking.  Throg gets to shout Avengers and Pet Avengers … Assemble!”  So there is no denying to the Avengers that they definitely have an animal division.

The army of dragons starts swallowing the Pet Avengers.

Fing Fang Foom recognizes Lockheed as being from the race known as the Flock.  Which is pretty cool as outside of handbooks and Excalibur 40, Lockheed’s race is never mentioned or named.

Issue ends with Lockheed standing up to Fing Fang Foom, which looks like a cat standing next to the Empire State Building.

Fing Fang Foom annouces that the Age of Dragons has begun anew!