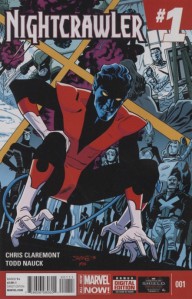 Seems like Marvel is trying to figure out where to place the credits now.  Half my comics had them up front with the recap page and the other half, on the final page.

The issue really picks up once Rachel and Kurt meet up.  Before that, we are shown Kurt and Wolverine in the Danger Room.  This is after Wolverine has lost his healing factor and is now wearing a new armor costume – which looks horrible here.  I’m sure that’s not Nauck’s fault as the costume doesn’t look very good.  Like a black version of Shocker’s costume but it looks pretty lackluster.

Kurt is trying to find a weakness in the armor.  Wolverine gets set off into a berserker rage as he really doesn’t want to be reminded of his lack of healing factor as it keeps tripping him up.  He’s not used to being so vulnerable.  He also isn’t use to being able to pop his claws and not have any repercussions of doing so.

Wolverine pops his claws, at Kurt, and comes charging at him.  Storm, Beast and Cecilia Reyes, who have been monitoring this session come running down.  Wolverine is bleeding all over the place.

Can’t believe Kurt is back to the land of the living, and is spending time with his ol’ friend, Wolverine, and his friend tries to kill him in a simple battle stimulation.  Good grief!

Storm cools Wolverine down by casting a giant rain storm.  I really like the panel of Kurt and Storm, with their hair wet.

Rachel telepathically speaks to Kurt as he is hanging from the ceiling in one of the many hallways of the Jean Grey School.  The latest mutant going by Sprite, is frighten of his appearance – a call back to when Kitty was frighten by his appearance. 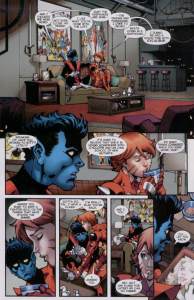 Rachel and Kurt go back to his apartment that Storm set up for him.  In the back, is a poster on his wall that is the cover to the original Excalibur first issue.  Which how does that work, in-universe, did they pose for that?  An artist rendering?  I don’t own this issue for the poster alone, or at all.

Rachel and Kurt are talking about where Kitty is nowadays.  Kurt knows now that Kitty is off with Cyclops and his school.  I wish we were getting Kurt and Kitty at the moment but Rachel and Kurt is fun to see.

Eventually, Kurt makes his way to Amanda Sefton’s apartment.  Which is a complete callback to the Paul Smith era, so of course, I love it.  He is on her couch, with a Bamf doll and ten actual Bamfs.  Which is a fun modern take on it.  What isn’t a fun modern take, is Amanda’s latest hero costume.  What is going on there!?!  Like a lady version of the Punisher costume with a cape and I don’t know.  It seems too much.

The foe teleports away.  Amanda wants to find her mother, Margali, to make sure this isn’t an attack on all mages.  Kurt agrees to come along, so that is how this title becomes a global title.