This story is billed, March on Ultimatum, which just means that this story takes place prior to Ultimatum, and thus, the last time we can enjoy some of these characters.

Also, this story is essentially the Ultimate version of Days of Future Past, but mostly in the way that it deals with time travel and going into the past to change the future – plus it has the X-Men.

Issue opens up 20 years in the future, New York City. 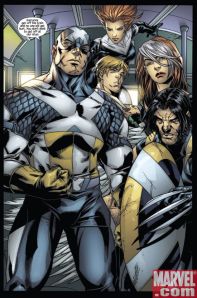 On a train, we see the future X-Men – Captain America with an X instead of an A on his forehead and an X on his belt (it is explained), a young blonde man who goes by Phoenix (it is explained), Kitty Pryde with web shooters, Rogue and Wolverine.

These X-Men attack those on the train.  Rogue and Wolverine kiss.  They hijack the train so that they can crash it into the Baxter Building.  Before they crash it, Captain America does a little prayer, which I shall repeat here, is always weird to read in a comic – as it usually means the character is nuts.

There are two pages of ads for new FOX shows.  Terminator, the Sarah Connor Chornicles – which I have no interest in and Fringe, a show I wished I had seen and one day will on Netflix.

Today.  The Baxter Building.  Sue is all dressed up, and Reed is goofy off – so she gets annoyed.  Turns out, he was only playing into her expectations.  He has an entire evening plan.  Sue thinks he is only making the plan up, as she can see the time machine is on.  This surprises him, but not as much as the train crashing into the building.

Thing and Human Torch come into the room.  Johnny makes a fun comment about how it sounded like a train, just to see an actual train in the room.  Thing believes Reed has something to do with it.

The Future X-Men come off the train, Cap is happy that they made it to the past and have found the Fantastic Four.

Reed shakes Cap’s hand, asking what they can do to help.  You can die, is the response.  Wolverine claws Reed through.  It doesn’t hurt Reed, as he doesn’t have any internal organs.

Thing recognizes Kitty as Spider-Man’s exgirlfiend.  He doesn’t expect much from her, as he isn’t afraid of her phasing powers.  Turns out, she has mastered her ability to phase, by now being able to make her molecules either super light or incredibly dense – just like what the Vision does.  Is this the first instance of Ultimate Kitty doing this?  I know she does it has the Shroud in the second Ultimate Spider-Man volume.

So Thing gets knocked out by Kitty.

Sue fights the male Phoenix.  Cap tells him to grab Reed and the X-Men flee by flying away.  Future Rogue has bird wings and Phoenix creates the flame bird to carry the rest.

Meanwhile, over at the Xavier Institute.  Rogue confronts Wolverine.  She is sorry that she took the drug, Banshee, that he is upset by as the developers used his DNA to create the drug.  He is tired of being constantly used.

Rogue pops some bone claws, so she still has some of his powers.  She tries to use her time at the Weapon X facility to relate to him.

There is an ad for Deadpool’s tie in to Secret Invasion.

Once Logan and Rogue get inside, they see the remaining three members of the Fantastic Four.  Sue wants their help to get back Reed.

In the weirdest thing happens.  Logan pops his claws, for no good reason, and Sue decides to match him by creating her own claws that mirror his, except invisible.

Jean puts Logan into a telepathic conversation, telling him to calm down.

There is a two page ad for Fable II, I’ve never played but I know it is pretty popular.

Jean is able to locate the Future X-Men, apparently they never left the Baxter Building.

Johnny tries to hit on Liz Allen, who recently found out she is a mutant.  Her father is the Blob and she has flame powers.

The X-Men are – Iceman, Liz, Jean, Wolverine and Rogue.

Back at the Baxter Building.  Reed recognizes Phoenix as his future son, Franklin.  Turns out in his research, almost every future dimension has Reed and Sue having a son named, Franklin.

Franklin is torturing his father.  He isn’t capable of killing him, but he can almost kill him.

What stops Franklin is the three claws through his chest.  In the future, Sentinels are based on Wolverine, and they must have swapped out the future Wolverine at some point as now there are dozens of Sentinel Wolverines, and they start attacking the Future X-Men.

There are two ads for X-Men : Manifest Destiny, the mini that moves many X-Men from Westchester to Utopia.

There is a nice splash page of the Sentinels attacking the Future X-Men.  I wonder how come Kitty isn’t just phasing through them?

There is also an ad for X-Men : Original Sin, a crossover between Wolverine Origins and X-Men Legacy.  It isn’t very good.

The combined heroes are flying to the Baxter Building, in the X-Wing.  Thing really likes the ride, and tries to hit on Liz.  She doesn’t want the attention and he is bad at flirting.

There is an ad for X-Men : Worlds Apart, a Storm mini that I own only the first issue.  It is about Storm trying to balance her life as an X-Man and wife to the Black Panther.

The heroes get to the Baxter Building.  Jean reveals that Captain America was really Future Cyclops.  Scott dies but first tells how the real Cap died and Jean died during the same attack.

Future Kitty comes into the room, tells them about future Sentinels.  Wolverine hates that even in the future, he is being used.

Sue confronts Phoenix, wondering who he is.  Jean covers for him, for some reason.

Kitty picks up the shield, and begins to tell the story.  We don’t hear it.

Reed recognizes that he is being held prisoner inside the Baxter Building, which he clearly knows how to work his way around.  He sees a flame trail and follows it.

Don’t worry, we are reviewing it next!