Really surprised that these two issues didn’t have some sort of clever Days Of … type of title, as I am convinced that the two writers were influenced by Days of Future Past.

When I originally read these issues, I felt like I was confused by the story, but now I can’t tell that was.  Maybe I read this one before the other one?  Or I read them to fast?

Issue opens with Thing piloting a plane Reed invented.  On board is Liz, Wolverine and Future Kitty.

Their destination has Pym Particles, which Sue needs to power their time machine.

The location : The SHIELD Hellicarrier over the North Atlantic.

Future Kitty asks why Liz has been so distant.  She doesn’t know how to address her.  Kitty doesn’t like being referred as Future Kitty, so I will stop that, as Present Kitty doesn’t appear in the issue.

Next scene is at the Baxter Building, as the time machine is operational.  There is no dialogue implying if they had any trouble with Pym.

Sue tells the Future X-Men, that they are not coming.  Which is silly, as they might as well go, and hold them prisoner there as they have to go back eventually.

There is an ad for the DVD Avengers Heroes of Tomorrow, a cartoon about the future children of some Avengers.  I have never been interested in it.  Maybe if it wasn’t the last Avengers animated feature.  No wonder no one watched it, we want animated adaptations like what DC does.  At least, I do.  Or shows like Wolverine and the X-Men. 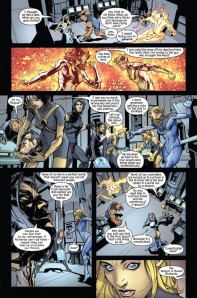 All the present day heroes agree.

Kitty talks about how mutants were being systematically eliminated.  Franklin was hoping to get the heroes of today, to help break out the captive mutants.  Also, to help overthrow a despot.  Thing jokes that is all they had to say from the beginning, that is sort of the Fantastic Four’s thing.

Kitty reveals that Sue is the despot.

Which transitions us to the future.  Sue wants Reed to say something.  He tells her she looks gorgeous – to which we already know that adult Sue is hotter than teenage Sue.  She is lucky like that.

Sue tells Reed that Johnny is dead.  Reed is angry with the older Namor.  I don’t quite know what the deal with Ultimate Namor is.

Ben speaks up from within the armor.  He takes off his face mask, revealing that Reed finally cured him.  It did take a while.  This makes Reed happy.

Sue tells Reed that the X-Men are terrorists.  Sue wants Reed to do what his future self did for Ben, but for all mutants.

The present day heroes come up with a plan.  Human Torch, Thing, Liz, Iceman and Kitty will go free Reed.  Jean, Wolverine, Rogue, the head of the Sentinel that has been helping them, Franklin and Sue will free the mutants.

I guess Future Rogue died when Future Cyclops did from the Sentinel attacks.

The Sentinel head tells the heroes that the Sentinels’ weakness is in their spines.

As these heroes prepare for the prison break, Nihil shows up.  Nihil is the Ultimate Annihilus.

Over at the Baxter Building.  Thing’s voiceprint still opens doors.  Johnny is upset that he is dead in the future.  Thing asks if Liz plays video games, she doesn’t.  Johnny makes fun of Ben’s sad attempts.  Also, he asks if Ben isn’t just transferring his feelings for Johnny onto Liz.

They come across the Future Fantastic Four, minus Sue.  Kitty tells Ben and Liz to confront their future selves, the rest of them will fight Namor.

Sue shows Reed the machine that cured Ben, it is called, the promise.  Reed likes the name.  He doesn’t like Namor being around.  Sue tells him that she misses him every nano-day.

Back in the N-Zone, which of course, is the Ultimate Negative Zone.

Nihil takes off his helmet, revealing Reed – now with beard.  He tells Sue, that once Johnny died, she changed.

Baxter Building.  Future Firestar and Ben have found a secret place, and start making out.  Firestar doesn’t turn off her power to do this.  This surprises their present day versions.

I like seeing these three together, as they become a bit of a trio in the Spider-Man comic.

There is an ad showing a John Romita Jr. drawn Green Goblin, which would have been an instant sell for me.

They then see Reed zap Iceman with a mobile version of the promise, and Iceman no longer has his powers.  This freaks out young Iceman and reveals where they were hiding.  Sue puts Reed into a force field bubble and gets him out of the room.

The N-Zone.  Sue notices Reed doesn’t have his powers.  He lost them the same day that Captain America, Cyclops, Jean and Thing did.

Reed reveals to Sue that Franklin is their son.  Reed also tells her that a thing called, Ultimatum, is coming and they will be tested.

There is an ad for Ultimate Origins, which I only own the fifth issue of.  This is where the reveal that the American government created mutants.

An army of Wolverine Sentinels start running out of the prison.  The heroes begin to fight.

Soon into the fight, Franklin knocks Jean out and takes her Phoenix powers.  Sue calls him a traitor.  He tells her that he is merely a mommy’s boy.  Just then, a door opens – revealing Namor, Sue and an unconscious Reed.

There is an ad for the Death of the Invisible Woman arc of Fantastic Four by Mark Millar and Bryan Hitch.  Don’t worry, it is an alternate Sue.

Future Sue threatens to kill past Reed if past Sue doesn’t stand down.

Wolverine and Rogue find the Master Mold, which is the real Future Wolverine.  Logan can’t believe he looks even younger in the future.  Future Wolverine whispers something and past Wolverine kills him.  Which shuts down all the Sentinels.

Momma Sue orders Franklin to kill them all.  There must be a door in the Baxter Building that leads to the N-Zone as Johnny shows up.  He wants to know if he should be killed, as well.

This distraction is all past Reed needed and he zaps Sue and her son’s powers away.

Future Spider-Man is given his web shooters back from Kitty, who I like with a shield.

Ben tells Thing to just keep hanging in there.

There is an ad for Astonishing X-Men Ghost Boxes, it isn’t very good.  I own the second issue.

The heroes come back to the present.  The two teams say their farewells.

Johnny asks Liz out, and she accepts.  Right in front of Thing, the jerks!

Wolverine and Rogue are going to be okay.

Sue and Reed are kissing and she leaves the room.  Reed shows us (?) that he has an engagement ring as the issue ends.