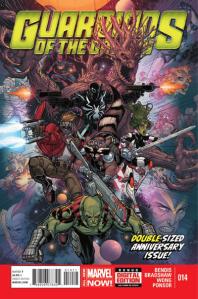 I like how Flash Thompson, Agent Venom, is added to the team via the recap page.  Or does it happen in a side comic I didn’t read.  He is there because the Avengers wanted to keep in touch with the Guardians.  That must have went over well.

Issue opens with Peter Quill, Star Lord, not being able to sleep.  He thinks about calling Kitty Pryde – hence, I now own this issue. 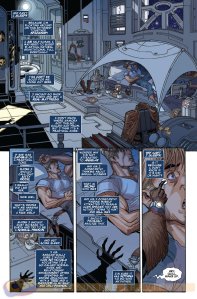 Peter wonders why he can’t have a nice girl as a girlfriend.  Maybe he can settle down, get a proper job and live a good life.

Rocket wakes Peter up.  They are under attack by Peter’s father’s forces.  Also on their ship, us Groot.  The rest of the team are on their own adventures.

Planet Spartax.  J-Son, Peter’s father, the King of the planet.  He is being told that his son’s ship is being attacked.  He is asked if he wants the Guardians to either be killed or brought in for crimes and punishment.

Gamora, wherever she is, is being chased by a bounty hunter.  The same bounty hunter that was hunting her, apparently, earlier in the series.  The hunter’s dialogue reveals that Gamora is Thanos’ daughter.  Which I didn’t know.  She is captured.

Knowhere.  A port of call near the end of the universe.  Don’t eat the street vendor glorkin.  I really like the location captions in this series.

Drax and Agent Venom are heading to a vendor.  I’m not aware of what is going on with Thompson, except that he is the current owner of the Venom symbiote.

Flash can’t believe he is off Earth and on another planet.  Drax doesn’t care for Flash’s enthusiasm, he is a little embarrass by it.

Drax tells him to present himself with an air of authority.  Flash repeats the request, I should act cool.  Drax doesn’t know what that means, but if it means the opposite of what Flash is acting, then yes.

Drax reveals the vendor’s name is Crakili.  They are in the store to get Venom an actual weapon.  His current gun is an embarrassment.

Crakili thinks Flash is funny with his ignorance.

Venom loves his gun.  They leave the store.  Venom keeps asking about his suit’s origins.  Drax is about to reveal some answers when they are attacked.  Drax is captured.  They fry Venom’s suit, revealing that Flash doesn’t have his legs below the knees.  Which sounds familiar.

Flash starts shooting his new energy gun, but the blasts have no effect on the fleeing ships.

The Venom suit reforms, and now he is stranded on a planet he knows nothing about.

The bounty hunter takes Gamora to those who hired him, the Badoons.

Peter Quill wakes up.  His father is sitting on the edge of the bed.  He wants to have a chat with his son.  He hopes they can exchange how they see the galaxy.  Peter doesn’t take the request seriously, being quite sarcastic.  J-Son wants him to take this serious.

Peter opens up.  He hates his father for coming to Earth, impregnated his mother.  Completely abandoned them.  When the Badoon came to kill his mother and himself, J-Son was nowhere to be found.  His father was off building his empire.

J-Son makes some great points about how all intergalactic races want to rule all the other races.  He, in turn, is disappointed that his son doesn’t follow in his birthright, of ruler of Spartax.

J-son also tells his son that the only way he was able to make peace with all of the enemies that the Guardians was to let each of their enemies take out one of the team.

There is no one who will be able to safe them.  Story ends with Captain Marvel on her way, she is the second new member of the Guardians that was promised.