We conclude our two part visit to ROM Spaceknight and the mutant that is Hybrid’s origin!

Last issue ended with the X-Men showing up to protect who they think is an innocent 15 year old boy from a killer robot.

Wolverine acts way crazier in this issue than I think he ought to be written as.  He is constantly working his own hero name into the conversation and it seems odd for him to be referring to himself in the third person.

There are two whole pages dedicated for recapping the previous issue.  The 80s!

A blizzard starts coming down.  Kurt thinks Storm should have a better control over her powers, she tells him that it isn’t her doing.

Wolverine slashes ROM and ROM feels utter pain.  Wolverine is out to kill the poor guy, and all over a misunderstanding!

Kitty is surprised, as I am, that Wolverine seems to be so berserk.  We learn that Hybrid can read minds as well.

Wolverine calls Colossus, Man of Steel – which I’m surprised isn’t a nickname that is used more for the Russian.

Wolverine also starts the first of three instances where he detects a greater evil but can’t quite place it but he knows it isn’t ROM but for some reason, he will keep fighting ROM as if that is where the source of the evil is.

Poor ROM wonders if he has to keep fighting Earth’s superheroes as he met Jack of Hearts in issue 12 of his own series.  I wouldn’t recommend seeking that issue out as Jack of Hearts is horrible.  Or at least, when he was part of the Avengers during Goeff Johns’ run and died in Bendis’ Avengers Disassembled, I didn’t miss him.  I probably just never ‘got’ the character but is that really on me?

Turns out that Hybrid has been manipulating Storm’s weather powers to make the blizzard worst but she is able to at least make it bearable.

ROM sees that Jimmy has reverted to his Hybrid true form and tries to warn Kitty as she has been holding Jimmy this entire time – trying to protect him. 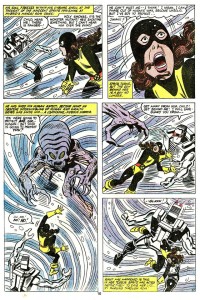 Kitty can’t hear ROM’s warning, with the wind gale.  ROM comes charging at her, to safe her, but she freaks out and phases through him.  The panel of him quickly on his knees and the caption of how intense the nausea he is feeling, is palpable.  Which I guess I don’t quite know ROM’s deal.  They keep calling him a cyborg but how much of him is made up of robot parts and how much is humanoid?  Or is he like a Dalek, and is a little dude in a metal can?

That’s another thing, so the X-Men are here to locate a new mutant.  They see ROM and just assume he is an evil mutant in a robot body.  How often has that happened to them before or since?  I can’t think of any examples.

Thus begins some great confusion, made worst by the weather.  Essentially, everyone has to figure things out on their own and fight their own battles.

Kurt starts giving Colossus CPR to try to save him.

Wolverine, again, senses true evil but sees ROM, wonders why he keeps holding back and yet again, starts trying to fight the greatest spaceknight of them all.

Then comes probably my three favorite panels of the comic.  Kitty realizes that ROM is the good guy and that must mean that Jimmy is the bad guy.  She still hasn’t seen Hybrid yet.  The three panels of her going from – curious to suspicious to utter shock, are amazing and Buscema really knows what he is doing with pacing.

I know people seem to think John Buscema is the bigger name of the two brothers but I’ve always been a much bigger fan of Sal’s work.  I’m sure I only own or have an read John’s work on a rare occasion.

Hybrid also has commented that he will use Kitty has the first of his many breeding opportunities.  Which is way gross!  He will later have the same plan for Mystique, Destiny and Rogue.

Kitty, or Sprite as her teammates insist on calling her, scolds herself for being scared.  She’s an X-Man now and has to go on the offense.  So she turns a snowmobile toward Hybrid and he counters by breaking it into its base components and throwing it back at her.

She luckily phases through the pieces but the blizzard is hurting her concentration, so she needs to change tactics.

Just then, she bumps into Wolverine, who is still out for blood. She finally tells him that he is after the wrong guy.  The two X-Men see Hybrid knock ROM’s gun out of his hand. 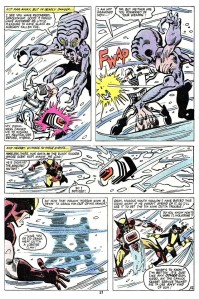 Wolverine gets the bright idea that the gun must be an effective weapon and tries to fire it at Hybrid. 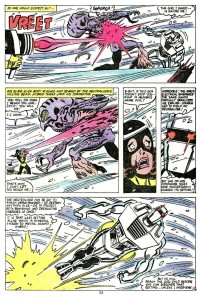 Kitty figures the gun has to be used and that she might be able to do what the reckless Wolverine couldn’t.  Due to the way her powers work, she is able to manipulate the weapon and fires it at Hybrid.

ROM tells her to change the setting of the gun so that it is on full force.

This tears Hybrid to pieces, which are also even grosser than his whole.  There is one bad side effect to this, doing so leaves a portal open to the limbo dimension that ROM sends all Dire Wraiths to. 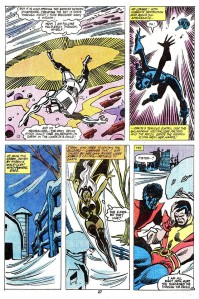 Who goes through the portal?  ROM does!  He has tasted his own medicine, and has found it to be … bitter!

The gun overwhelms Kitty and she drops it.  The X-Men gather around her, as far as they are concern, they have done everything they can do.

There is a Hostess Fruit Pie ad starring Thing in Earthly Delights.

As they walk away, we see that the Neutralizer is just laying there on the snow.  Without it, ROM is stuck in limbo!

Which I don’t own the next issue.  The next issue of ROM that I own is 31, and by then, he has escaped limbo.  I’ve already reviewed ROM 32, which is when Hybrid returns, so even he escapes his fate from this issue.

Of my eight issues that I own of ROM Spaceknight – we now have reviewed three of them.  The other issues are 45, 65, 66 and Annual 3.  Not sure when we’ll get to those but one of these days.  Annual 3 could be as soon as two years from now!  Exciting!

Also, for any Batman : Arkham City fans out there – Today is St. Roch’s Day!  The only holiday in August!

Thanks to YouTuber PenMaster3000 for hosting the video!