Somehow I missed posting this!  My system must have a hole in it as I can’t figure out how I missed it.

I really like the cover design, there are some fun touches!  Kitty is on a towel with a slew of Xs on it.  Jessica has a spider web motif bathing suit.  Dagger has a miniature dagger on her bikini top.  I do feel bad that Bombshell doesn’t have a defining motif besides the coloring – but she’s still a new character.  A fun thing additional could have been #*(@& which is often shown as censored profanity as that’s how I first met the character, she had a bit of a foul mouth.  But I haven’t seen that side of her in this title, so maybe she matured out of swearing, just to do it.

I reread issue two and I can confirm now that the design of Bombshell’s bikini is the same as the design on her hero costume’s legs.  It would have been nice if she donned her costume in this issue.  Now that I notice her bikini / costume connection, Kitty and Jessica’s fall under that too.  Kitty wearing all white, just like she did in Ultimate Comics X-Men and Jessica in black and red, just like her costume.  Jessica also has a spider on her mobile phone.

What I am getting at is, a lot of thought clearly went into this cover.

This is also a cover, I tried to make sure my wife didn’t see.

The beach issue!  Pinna’s art really picked up this issue, which I’m not sure if that is due to the ladies being in bikinis – I would like to think it isn’t – but it is better.

Off the west side highway.  This opens with the not-so-dead cop who is now a reptile.  He falls into the sewer.  I really have no interest in the villains of this series – thus far.

Coney Island Arcade.  Kitty and Bombshell are playing air hockey.  I do love me some air hockey.

Jessica is watching Dagger play a shooting game.  I am lucky that Kitty has long hair and Jessica short, as I am not sure if I would be able to tell them apart.

Kitty lies to a couple that she isn’t who they think she is.  She still doesn’t want the public’s love and admiration for saving the planet. 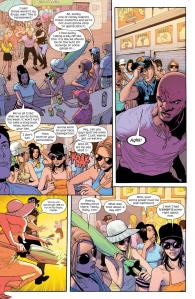 The ladies see a police officer arrest a guy.  Dagger feels bad for taking a day off from heroics.

I sort of like how Lana is the team joker, she has a wicked tongue.

Dagger calls Lana, Baumgartner, which I originally thought was a new slang term today’s youth was using.  Turns out, that is just Bombshell’s last name.  Dagger’s name is Tandy Bowen.  Since they are out of costume, I should use their real names.

Kitty mentions, Iceman, which is this title’s first reference to the X-Men.  Do they still exist?  Does Utopia still stands?  Has Colossus stepped down and elections for their next leader happened?

With the announcement that Ultimate FF (Future Foundation) being cancelled with issue six – and this title ending at twelve, who knows if we will get answers to those questions?  Regarding the rumors of this title ending, I am not surprised.  Previous Ultimates runs have ended when the creative team was done.  I am sure they will just relaunch it again with the same cast of characters but with a new creative team.

The ladies take off their sun dresses, except for Tandy – her’s apparently can be swim in.  I like how Jessica is in a one piece swimsuit and Kitty is in a sensible bikini.  Lana’s bikini is the only one that is overly showy, but she strikes me as a lady who is full of confidence.

Two loser guys show up with lame pick up lines and Lana dismisses them, promptly.

Tandy talks about how it is a shame the boys couldn’t make it to the beach. Which transitions us to those two.

Westside Church.  Cloak teleports two trespassers to the street.  An older guy is tired of heroes being above the law and starts shouting at Cloak.

Spider-Man and his pal, Ganke, are webslinging to a film.  Miles is apparently dating a gal named, Katie.  She knows he is Spider-Man.  He wants to know if he should tell her that the Serpent Skull leader kised him.  Ganke doesn’t believe he should.  It didn’t mean anything.  If it was me, I would have called my wife seconds after it happened.

Spider-Man has to refill his web-shooters.  I don’t quite get what he webbed to the wall.  Is that how his webbing refills?  He surrounds the cartage with webbing and it soaks it up?  So confused by that visual and what is in the middle of the webbing.

Back at the beach, Lana wants to get to know her team a little better.  We get confirmation that Tandy and Ty (Cloak) are officially dating.  They have been through some stuff together.  Lana asks if they do like … like, which I can only guess she is asking if they have had sex.  Tandy answers with a “I wouldn’t know, at least not without powers.”  I echo Lana’s, whuuut.  What does that mean?  That when they combine their powers, that that is like a sexual release?

Kitty sees where this line of questioning is going.  Lana turns her attention to Kitty and asks if she ever got with an X-Man.  As far as I know, she only dated Iceman to disastrous results.  We know she was at least sleeping with Jimmy at Utopia, but not sure if they were sexual.  I doubt it as we never even saw them kiss.  Also, I’m pretty sure Peter Parker died a virgin as Ultimate Spider-Man Annual 3 dealt with him and Mary Jane and the whole ‘sex’ issue.  He told Mary Jane that he and Kitty never did it.

Kitty just tells Lana that it is none of her business.

Lana turns to Jessica next.

Jessica isn’t sure how to answer.  Kitty tells her that Jessica doesn’t have to.  Tandy doesn’t know what the big deal is.  Kitty tells Tandy that they are all not as forth coming as Tandy is.  To which, Tandy starts to call Kitty a b– and Jessica reveals that she is a clone of Peter Parker, Spider-Man.  I love Pinna’s decision to have her roll her eyes so hard.  I would also hate having to explain my origin if I was in her shoes.

We do get treated her a one sentence origin for Jessica – which I’m always a fan of a character having to sum of their origin in as few words as possible.  “I was literally made to be a government super-solider by Doctor Octopus and the government a few years ago.”

Jessica goes into issues with self identity that I have wondered about clones for a while.  It is especially harder for poor Jessica, being the different gender of who she is a clone of.  She has Peter’s memories and feelings in her head.

The main take away from the issue is Jessica revealing that not only she is a clone of Peter Parker but that she is attracted to the ladies.

As I was reading it, I was thinking – good for you Jessica, owning your sexuality!  Then I read her types.

So red head and Jewish gals.  So it is still Peter Parker’s attractions that she now is feeling.  But like she states, if she can’t shake those thoughts then they must be hers.

I do like how none of the gals try to cover themselves up, now that they may have a lesbian amongst them.  That is very mature of them and they handle it as great as one would always hope people will handle such news of coming out.  Those are good friends.

The only time she has had any romantic anything with a boy was Ultimate Comics Spider-Man issue nine when Human Torch forced a kiss on her.  The dirt bag. It was probably the first time she had to even have the thought about him.  Though we are not really shown them kissing, Johnny just tells Peter that it happened.

Lana gets a call from her boyfriend Poey.  He sounds super depress and she leaves the gang to check on him.

We see someone shoot Poey with a gun through a mango.  Which seems more like a movie thing to do than something that a person would in RL.

Next, we get two pages of two panels each (for four panels) of solo Serpent Skull gang members taking out entire groups of competing gangs.  Sidewinder vs. the Zombies in Lower East Side.  Anaconda vs. the Wolfpack in the Bronx.  Black Racer vs. Supreme Soviets in the Meatpacking District.  Death Adder vs. the Nastyboys in Harlem.

I’m glad we only got these pages and not an entire issue committed to these fights.

Lana gets to Poey’s house.  Now that I am looking for it, her skirt is her costume theme, with the black and pink stripes.

The second she finds his body, she gets glitter thrown in her face.  She is frozen in place as the Serpent Skulls unfold their plan to her.

I feel so bad for Bombshell.  Her boyfriend, Poey, is murdered and now she is going to be used by the Serpent Skulls as the tool that destroys the team.

I do like how that female leader of the gang straight up killed that would-be-rapist.  Good for her!  That’s a gang leader, I can get behind!

I was going to post Poey’s chronological appearances, to see how big of a character he was.  Neither comicbookdb or the Marvel Database has pages for the character.  I suppose they never will now.  I just know he was in this issue, the previous issue and apparently in All New Spider-Man 26.

Poor Poey, didn’t have much of an impact.  He was Lana’s boyfriend, so he mattered to her but that’s the extent of it.