How great is that cover?  Kitty should be on all of these!

I like proper Vermin, he’s a little lame but he serves his role fine.  Most people might think of him as a Captain America villain as that is where the legendary JM DeMatteis created him.  I always think of him as a Spider-Man villain.  He was used well in DeMatteis’ amazing Kraven’s Last Hunt.  What I think of first is how DeMatteis used him in his proper Spectacular Spider-Man run, especially in the Child Within storyline.  That whole run is drawn by equally legendary Sal Buscema.  If Marvel ever released an Essential trade of that three year run, I would totally buy that.

I like how Fiffe uses the caption boxes to introduce each character and a fun trivia note.  Reminds me of Fraction’s Uncanny X-Men run.  Black Widow aka Jessica Drew – team leader with proportionate strength of a Spider-Man clone.

Vermin is a tank in the Ultimate Universe.

Is Spider-Man this weak, or is the team fighting stronger opponents?  First Crossbones gives him some gruff and now Vermin still stands.  Great layout with how Vermin punches Spider-Man to the face but look at the bottom right side of the panel.  A little hand phasing Spider-Man out of the punch. 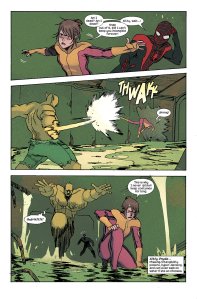 How Kitty isn’t the leader is beyond me.  She’s the best.  Kitty Pryde – Phasing / Intangibility powers, hyper-densing, and can even walk on water if she so chooses. 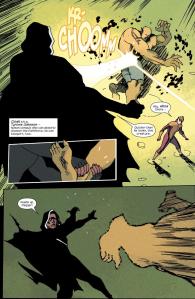 Cloak hits Vermin with a blast of something, it isn’t dark matter.  What is that?

Vermin runs off after taking a full blast from Dagger.  It only fazed him but just barely.

Spider-Man makes a reference to how the team doesn’t wear face masks besides himself.  Bombshell isn’t on this mission, she’s home being sad.

Great use of Dagger being their beacon of light as they go deeper into the sewers.  Cloak believes he’s been hearing Vermin’s howls for a while now.

Midtown South Precinct.  The cops have Scourge in custody.  His name is Charles Delazny, he’s a high school janitor who is super racist.

NYC Westside Sewer.  Kitty believes she stepped into something gross.  I bet she did!  Dagger makes an awesome reference to how wearing an all white uniform really doesn’t work.  Which I’ve been saying that since Ultimate Shadowcat made that her default color and she was living in the desert Utopia.

They come across that police officer from earlier in the series that had the experimental drug tested on.  Somehow Spider-Man recognizes him, even though he’s green, he has no nose, no hair and one eye.  He must be really good at recognizing groans.

The Ultimates meet Vermin’s master, Agent Crock, who has some type of technology as part of his head.  Black Widow tries the peaceful introduction approach but that doesn’t work.

Kitty phases her hand through Crock’s head (is his name meant to remind us of Killer Croc?)  and in the confusion, Crock strikes Vermin.  For his thanks, Vermin rips off Crock’s hand.  Pretty drastic response!

The police officer now has the ability to merge minds or something and we get a data dump of Crock being former SHIELD.  Experiment were done on him and Vermin.  Now they live in the sewer and don’t steal as often as one would think. 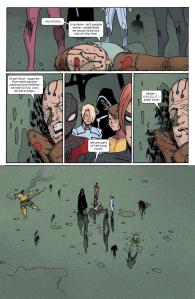 I should type, lived, as I’m sure Crock is dead.

There is a knock on the door and we get the Ultimates and the green officer guy.  One would think one of them would have knocked on the door so that the first thing O’Reilly saw wasn’t her former friend as he slowly decomposes.