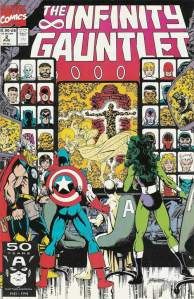 The miniseries that taught me that there is no ‘h’ in Gauntlet.

I only own this issue of the six.  I do own the trade so I know what happens in it but this issue has an appearance by Kitty Pryde!  Who happens to be one of the missing heroes.

So last issue, Thanos – now having all six of the Infinity Gems – Time, Space, Mind, Soul, Reality, and Power – and having fashioned them onto a glove, snapped his fingers and half of the universe’s population disappeared.  He did this to try to make Death, who he fancies, take notice of him.  It didn’t work.

There are certain panels, like close up on Wanda’s eyes, that are so distinctly George Perez that it makes me realize that I miss reading his work if too much time passes.

Issue opens with the Avengers – She-Hulk, Thor and Vision, helping land a plane that lost both its pilot and co-pilot.  They help all of the passengers off of the plane.

Quasar, still trying to balance being the guardian of the universe and running his company – Vaughn Security Systems (see?  He does both all the time!).  He is summoned by the cosmic entity, Epoch, as he is needed for a meeting.

The Kree Empire believes the Great Disappearance, is the result of a Skrull plan so interplanetary wars are about to begin.

Doctor Strange is watching over Silver Surfer, his fellow Defender, as the Surfer heals in the sunlight.  Hank Pym was asked to come by to help but all he can do is pat Strange on the back for doing all he can do.  Hank Pym, not the best guy to have around.

Once Pym leaves, Strange is teleported to another type of plane of existence, a golden plane.  I’m not sure what happen to Wong but he got replaced with a green looking fella – Rintrah.  This mysterious being who summoned Strange is Adam Warlock.  He wants to organize an elite taskforce of Earth’s Mightiest Heroes!  Strange needs more answers before agreeing to help, so they open their souls to each other.

Doctor Doom recognizes that half of the universe’s populace is gone and he seeks out who is behind this.  The same signature that took the people is also located in a small town in New York and at Doctor Strange’s house.

This comic has the nerve to have the trifecta of the worst characters Marvel has to offer – Starfox, Colossus and Wonder Man.  At least Colossus is barely on the page when we see him.

We start with Starfox as he gets teleported away.  He is Thanos’ brother (a fact I keep forgetting about).  Their father is Mentor, but Thanos teleports him elsewhere.  Once Starfox is with Thanos, he recognizes that Thanos’ granddaughter Nebula is there – but she looks like a walking corpse.  It is pretty mess up.

Also present is Mephisto who is Thanos’ advisor in this adventure.

Starfox starts trying to use his rape powers … I mean his emotion manipulating powers – on Thanos.  As thanks for his efforts, Thanos seals Starfox’s mouth shut.  That’ll show him!  Starfox, is the worst.

Over at the Avengers mansion, we are treated to Perez drawing various characters as Captain America reaches out to try to figure out who is still living and who has disappeared.  Still no word yet on the X-Men or Excalibur.  In that panel, we see four mutants – Shadowcat, Jubilee, Colossus and Psylocke.  Not sure why Kitty is in that group, or how that image came about.

So that’s why I own this issue.  Funny how once I get to the page that I bought the comic for – my interest in the rest of the comic lessens.

Thor comments to himself how he isn’t the original Thor – so he must be Eric Masterson, soon to be Thunderstrike.  He goes about pretending like he is Thor.

Odin has summoned Those Who Watched From Above, also known as the Sky-Fathers – so Zeus is there.  I really like the concept of all of the same gods getting together.  It just makes sense.  Jupiter should be there too.  Even though we might not think of them as being popular, to each other, they are peers.  I guess Jupiter/Zeus are the same guy.

Odin gets them all to agree to fight as a united force.

Quasar is told to wait, which is what he is good at.

The Pip portion of the comic happens.  I have a hard time getting into Starlin’s pet characters unless they are Thanos.  Pip and Adam Warlock, and probably anyone else who shows up in this series that is unique to it.  I just never found Pip that funny, he’s pretty much a shorter dirtier Deadpool.

Doctor Doom pays a house visit to Doctor Strange.  Silver Surfer wakes up to find so many doctors around him.  Doctor Doom wants Strange to inform him of everything that has occurred.

Just then Adam Warlock shows up, and Doom isn’t impressed with him at all.  Warlock has lost to Thanos twice already, one of them resulting in his death – so why should he lead the united heroes against Thanos?  It is a dman good question!

Thanos is torturing his brother and granddaughter.

Mephisto tells Thanos that none of this is getting the attention of Death.

Adam Warlock believes since he knows how the Infinity Gems work, that he should be the leader.  Doom isn’t buying that reasoning.  Doom knows that none of the dumb heroes will follow him so he agrees that they might follow Warlock.

Thanos then makes the mistake of yelling at Death, that she hasn’t even look at him much less say his name.

Galactus takes note of Thanos now being a cosmic threat, as his rage just destroyed a planet.  Galactus starts thinking of a plan to stop Thanos.

His rage took on the form of a psychic wave – and it has destroyed a quarter of the universe.  By the time it gets to Earth, it is down to two percent of its strength.

On Earth, Cloak is thinking of ending things.  Dagger is missing and he has no reason to go forward.  So cool to see Cloak drawn by Perez.

I’m not much of a cosmic Marvel reader, which is Starlin’s bread and butter, so I respect him for all of his stellar opus but I don’t read nearly half of it.

Just then, the psychic wave hits the planet.  Buildings start to crumble, Wolverine (in a Canadian tuxedo) saves a family.  They thank him but he grimly responses that he may have saved them for a quick death.

Iron Man, who is hovering in space, can’t believe the world wide destruction.  He witnesses the entire west coast of America breaking off and sinking.  It is quite the sight!

We see Scarlet Witch and Wonder Man as they deal with the destruction of their adoptive home – as they are members of the West Coast Avengers.  They can’t believe that California is gone.  We get a close up of Wanda’s eyes and they are clearly drawn by the legendary George Perez.

Now I’m being weird about how much I enjoy George Perez.

We learn that even Asgard got destroyed in the process.  Even the Rainbow Bridge is gone!

Maybe even worst is that all the Skyfathers are now stuck in Asgard, so they can’t get to their realms!

From Namor, we learn that new volcanoes have been created on the seabed.  Which causes tidal waves.  One heads to the East Coast of America and the other to Japan.

Namorita saves one couple but that’s all she can do as the tidal wave hits Atlantic City – everyone else in the city is dead by drowning.

Lastly, Thor confirms the worst that has happened – Japan is completely gone.  The great island country has sunk.  Just the concept alone is mind bending!

Over at Avengers Mansion, thanks to New York bedrock, the mansion still stands.  We get a process report – She-Hulk has located Spider-Man, Black Widow found Cloak and Vision is talking to the Inhumans.

Captain America talks to Wanda, the West Coast Avengers have moved to Vegas.

Issue ends at Doctor Strange’s house.  The rest of the houses nearby are rubble, but his stand.  He didn’t get time to cast a neighborhood wide protection spell – or so he claims.

So that’s it for the issue and our time here at S&FwM’s visit with Infinity Gauntlet.  It is a great series.  This is the series people talk about how Captain America stood up to Thanos, and proves how bad arse he really is.  That’s usually the big moment people talk about from this series.

Wanted to say Happy Veterans’ Day to all those who serve and protect us!  As well to those who have retired from duty.  My mother served in the Army for most of my childhood and the military has always been good to us.

I sleep better knowing that you all are out there and I appreciate what you are doing!