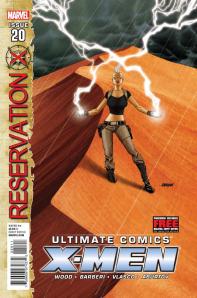 At this point in the title, President Captain America has given the remaining mutants, all 20 of them, a reservation in New Mexico, that the X-Men have called, Utopia.  The mutants are broken into two factions.  Kitty as the official leader, and Mach Two, who is starting to rally a movement against her.

Issue opens with, a page of Jimmy continuing his survey of their new home, including the outskirts.

Then we catch up to everyone on the settlement.  Armor and Magma are sharing a room.  Armor sees a lizard and mimics her armor to resemble the lizard.  Magma asks her what she is doing and Armor says, nothing.  Not sure if it is due to her being embarrassed or bored but not wanting to talk about it.

Kitty and Rogue, who I like, are trying to maintain a friendship, are jogging.  I got the impression this is a morning routine for them.  In the previous arc, the American government, came up for a cure for mutations and the vast majority of mutants opted to take the cure.  Turns out that mutants only exist because the government created them, which was explained in Ultimate Secrets. Which I’m still confused about, as that story didn’t quite go into details except for the headline.

I like how, like a Power Ranger, that Kitty’s civilian clothes are white theme.  I still say, who wears completely white in the desert?

Mach Two and Warpath are talking to each other.  He is like her second in command.  Kitty only won the leadership position by two votes or something like that so Mach Two is still upset about the lost.  Mach Two stole the gun that Nick Fury gave to Kitty.  Mach Two is pretty sure that Kitty will never notice the gun has been stolen, as Kitty hid it securely.  He is confused has the gun isn’t that great of a weapon as most mutants’ powers can outperform a gun.  Mach Two states that it is how she is going to use the gun to take down Kitty that is important.

Jimmy finally comes home and has a meeting with Kitty.  Kitty has been missing him, and they hug, even though he smells like eight days of sweat.

Jimmy delivers the bad news.  There is a nice five mile zone that they are currently living in, which is fine.  The rest of it is barren and nothing is alive out there except for a few lizards.  He even found a long stretch of land (roughly twenty percent of their land) that is radioactive.  It is official, this was an old Department of Defense testing ground.

Kitty tells Jimmy that Mach Two stole her gun.  It has to be her as she is the only one with any motivation.  Apparently part of the deal with Captain America was that the mutants wouldn’t have any weapons, nor leave the reservation.

We catch up with Storm, wearing a bikini as a top.  She is speaking with Blackheath, still maintaining that ridiculous hair style.  The right top of his head is shaved, the left side has rows of dreads.  How much work does that take to maintain, oh and his hair is green.  He tries to convince Storm to take Mach Two’s side, Storm states to not waste her time as Kitty saved them from the fleet of Sentinels and is loyal to her.  How great is it that Ultimate Kitty is this grand of a character?  There was a time when Ultimate Comics X-Men was one of my favorite titles.

Blackheath changes the subject, he just created a superseed thanks to his and Zero’s work with the seeds that Tony Stark provided.

Kitty is now looking at the seeds and is being told what the significance of the seed is.  Blackheath is sure that they created a type of life form, a seed that adapts to its surroundings and finds a way to grow.  He still needs to do experiments, but should know for sure in a week.  Kitty asks to speak with him in private.  She wants him to be more discrete with the information.  She wants to handle this in the best way possible.

Blackheath makes a mistake and refers to the seed as a mutant seed.  She stops him right there and says that is the problem.  The world isn’t going to want a mutant seed.  She tells him to keep working on the seed, she will work on the business side.  Kitty is going to call the one person she has a number of.

Rogue is enjoying a walk when Psylocke shows up and ruins her day.  Poor Rogue was falling for a guy, Ultimate Quentin Quire, who was immune to her powers.  He decided to take the cure, leaving her alone.  Rogue wishes she had taken the cure.  She then wakes up and realizes it was all a dream.  A sad tragic dream, or is Psylocke really running around in people’s minds and ruining their day?

Kitty had called Nick Fury and he had called Tony Stark.  He arrives to Utopia with a fleet of army trucks.  She tells him the name of their land, and he laughs as it sure doesn’t seem to be a Utopia.  He also finds out in this exchange, that Kitty is the leader.

Tony is shown the seeds, and they are barely growing out from the ground.  He isn’t impressed until Blackheath states that this is growth of only five minutes, which does impress Tony.

Tony lets Kitty in on what the ramifications are for this superseed.  That there are countries that depend on other countries and their manufactured seeds to survive.  Even Tony has development teams working on superseeds.  With Kitty’s seed, countries won’t need to rely on other countries for crops.  Especially as Kitty wants to give it away for free, to show that mutants are decent and wonderful people.

Tony tells her that two things are going to happen now.  One, he is now in charge of her business affairs and is her military consultant, which he will announced at a press conference along with Kitty.  The second thing is that Utopia is going to be attacked, Kitty wants to know by whom.  Tony states that it will probably be several different attackers from various countries that will not want the seed to be spread wide and far.  Tony goes as far as to state that it might not even be a real attack, it may just be an attempt to firebomb the entire place.

Tony tries to assure her that he has a plan even for that, and debuts the Ultimate Iron Patriot armor.  So funny how this armor started off as Norman Osborn’s attempt, in the Proper Marvel Universe, to appear as both Iron Man and Captain America as the leader of his (Dark) Avengers while he was in charge of SHIELD, that he quickly renamed to HAMMER, which was never explained what those letters stood for.  Next, it became the armor for Rhodes in the Iron Man 3 film.  Now it is in the Ultimate Universe, as protection for the X-Men.

That night, Kitty and Jimmy are having a romantic dinner.  She wonders if she is crazy and he states that if she is, she is no more crazy than when she lead the X-Men, which was her and him, Rogue and Iceman (poor Iceman started off as a lead in this title and now hasn’t been seen in issues) from New York City to the Southwest to attack the Sentinels.  She tells him that now is the best opportunity for him to put some distance between him and her.  He gives her, what I imagine is a movie line of, “or not” then we see that they shared a bed.

She’s 18 now and a leader of a minority, living each day like it is her last, so I’m fine with having a sexual relationship with Wolverine’s son, Jimmy.  I rather she was with a better guy but there are none of those around at the moment.  At this point, he is her third boyfriend, after Iceman and then Peter Parker Spider-Man.  He treats her well, which is all that matters to me.

Issue ends with Mach Two holding Nick Fury’s gun to Kitty’s head.  Kitty tells her that this is madness and that this is a sad desperate bid for attention.  With that, Mack Two points the gun from Kitty to Jimmy, who is sleeping.  Kitty shouts No! and Jimmy wakes up and Kitty hugs him crying.  Poor Kitty just can’t stop fighting battles on different fronts.

This is why I think they had sex, and not just slept in the same bed.  Jimmy took a bullet to the head on the way to the Southwest and survived it, like five issues ago, so two storylines ago.  He can take a bullet to the head and survive.  She should know this but now that they are in a relationship, she is looking out for his best interests instead of viewing him as an ally, knowing his strengths and weaknesses.  Also, Wood didn’t write that issue, Nick Spencer did so maybe he didn’t read the issues that closely.

Nick Spencer was writing Ultimate Comics X-Men as a revolutionary title and then Wood took over and made it into a political title.  Both were amazing and I really enjoyed this second X-Men title in the Ultimate line.  I will have to review the other issues in this storyline at a later date.

There were several house ads in this issue, funny how many of these are still being published and how many are not :

Savage Wolverine, meant to be a rotating creative teams telling the Wolverine stories they wanted without having to deal with continuity.  Is coming to an end soon.

Superior Spider-Man, rave reviews, coming to an end with Peter Parker taking his body back from Doctor Octopus.

Uncanny X-Force Volume Two, ending soon to be merged with Cable & The X-Force

Punisher : Nightmare, never heard of it

Morbius the Living Vampire, an actual ongoing for the seldom Spider-Man supporting character.  Never heard much about it, I believe it is still being printed but I could be wrong.  Not bad for an issue that came out a year ago.  At least they were advertised.