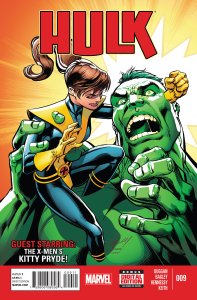 The issue Gerry Duggan was cool enough to tell us about months ago on the Kitty Pryde appreciation thread over on the Comic Book Resources X-Board.

Good thing there is a Previously On page, as we’re nine issues in and I wasn’t exactly sure what made this Hulk “Doc Green.”  I was under the impression it was just another stab at the Professor Hulk that had Bruce’s mind and the Hulk’s body.  Doc Green is not that.

So this is what happened, prior to this – Betty Banner put out a hit on Bruce (or the Hulk).  Bruce was healed by Iron Man’s Extremis (and main plot point of the film – Iron Man 2).  This made the Hulk super smart but when he sleeps, Bruce comes out.  Previous other events are mentioned throughout the issue but we’ll get into those as they come up in the issue proper.

The Canadian Wilderness . . . Home to the Weapon X Program . . . and Cyclops’ team of X-Men.  Doc Green, as he calls himself – so I will do the same, is knocking on the X-Men’s door.

I really like seeing Kitty and Illyana pal-ing around together.  Or surviving a Hulk experience, what have you.

I’m firmly in the camp, now, that Gerry Duggan should write a Shadowcat ongoing. 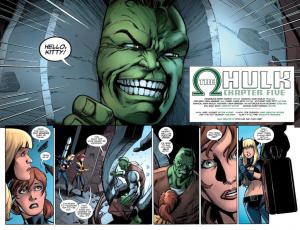 Doc Green pokes his head through the door, just like Jack Nicholson did in The Shining.

Has Magik met Hulk before?  I know she stood on his back when the Secrets Bomb went off in Original Sin 3.

I do like how Magik already has a plan, teleport him to the Sun.

Doc Green is there to ask Shadowcat for some help.  Magik being shocked that Doc Green has a briefcase is pretty classic.  I’ll be great with Duggan writing a Magik ongoing, as well.  She could totally carry her own title for years to come.

Kitty wonders why Doc Green would come to her, of all the options he has.  Though, I’m not sure if his logic is right.  Also, does any code carry a by-line about brain surgery?

This procedure feels like it should be pretty intense but the explanation is pretty straight forward and we’ll see how easy it was for Kitty eventually.  But Doc Green’s artificial intelligence and Shadowcat’s know-how, make it completely understandable why this goes so fast.  Which really means, that Duggan got a chance to write the X-Men’s Shadowcat and Magik, and took the opportunity and ran with it.  Which I fully support.  obviously

The Extremis program caused Doc Green to have a brain tumor.  Do other people suffer from this?  It seems like something Tony Stark should have worked out, by now.  I bet the Hulk’s biology is the reason for it.

Doc Green really just needed a person who can turn intangible (but also has skills for it).  With a little magnetic goo, Kitty should be able to phase her fingers into his head, and the tumor should go straight to her fingers.  Seems pretty straight forward.

Doc Green reveals that it was Banner who was shot and became a vegetable.

I sort of adore Doc Green having no respect for Banner and keeps calling him, Puny Banner.  That’s pretty fun.  I also really miss Bagley, he’s been a constant in my comic book collecting life for decades and it has been some time since I last read a comic by him.  Since Ultimate Cataclysm, so its been a few months / half of a year.  I should have gotten Ultimate Spider-Man 200, but I added it to my Christmas list so I should be getting a copy of it soon.    I went with the Peter Parker cover as he my Ultimate Spider-Man.

Doc Green foreshadows that Stark is one day going to blow up the world, which probably will happened one day.  Him and his Illuminati friends sending the Hulk to that one planet caused it to explode.  Plus the Illuminati has been destroying Alternate Earths in the pages of New Avengers, so maybe that is what is being hinted at here.

Shadowcat asks about the connection between Puny Banner and Doc Green.  Which is pretty smart, she really has two patients’ lives to consider.

I like Doc Green calling her, Katherine Pryde.  Him stating that he is smarter than Banner is good to know, as well.  He is very confident in her abilities to perform the task.  Being a second choice behind Reed Richards isn’t too bad.  I wonder what Doc Green was hinting at with what else Kitty can transverse.  Like time?  Like space?  Like jello?  Like that death trap Deadpool puts her in in Deadpool Kills the Marvel Universe 3?

So we get the explanation and then one page of dialogue and now look, Shadowcat saved Doc Green.  I wonder if the tumor has been a long running plotline or did it get brought up this issue and solved this issue.

Do people snicker about Illyana’s head garb things, behind her back?  Look at those in the middle right panel?  The heck?!

Kitty removed the tumor and now Doc Green is hemorrhaging.  He references Abomination hitting him, which happened in the fourth issue of this series.  Which I had to look up, on my own. 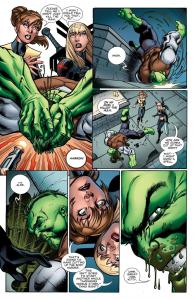 Kitty has the natural concern about killing a Hulk.  Magik immediately comes up with a plan to get rid of the body.

I can’t imagine what it must be like to wake up to someone talking about how they killed you while their friend talks about how to get rid of your body.  That has to be unsettling.

Magik is concern about yet another Avengers v X-Men nonsense.

Doc Green has a teleporting device, proving he really doesn’t need Magik at all.  She really was only Kitty’s friend in this issue.  Which is pretty cool.

Kitty gets to reprise her famous, . . . is a jerk, that everyone just loves.

Cyclops makes a cameo and we end the X-Men section of the issue.  The rest is okay but since we are not getting issue ten (unless they reference Kitty, which might happen, or at some point in this future), the rest moves rather quickly.

The Beehive, a place of secret science for Doc Green.  Doc Green interrupts a conversation Jessup and Damon are having.  I guess they are research assistants of Doc Green.

Before going to sleep, Doc Green turns on the security system.  Bruce wakes up, he has the same hair style Doc Green has, which I’m not sure has always been the case.

Betty Banner is no longer Red She-Hulk, and Doc Green has set bombs all over her house.  If Bruce doesn’t change back into Doc Green, her house will explode.

Doc Green comes back and falls asleep.  He has a dream of becoming the Maestro from Future Imperfect.  He wakes up, wanting to grow a beard.  Issue ends with him taking a blade to his hair, so I’m not sure what that has to do with growing a beard.

Next issue promises to have Doc Green fighting Red Hulk.