In 2003, we were treated to Ben Affleck’s Daredevil. 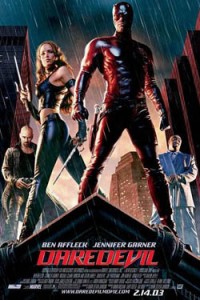 I remember being the first one there, one February morning, and realizing that this film isn’t going to make anywhere near the money Spider-Man did, only a few months earlier.

I like the film but once the Director’s Cut came out, that’s all I can watch.  It, coincidentally, has less Jennifer Garner, which may be what makes it more into a movie.  There are more scenes involving the plot and such.

Thanks to MrKARproducitonslife for hosting this video!

I was a giant Ben Affleck film, circa 2003 – though I still am but I’m so far behind in my movie watching, largely because of how often Affleck worked with Kevin Smith.

Here is the trailer –

Thanks to QualityIsNumber1 for hosting this video!

I was perfectly cool with the late Michael Clark Duncan portraying Kingpin, that just made perfect sense to me.

I imagine that this film is fun to watch at the ol’ Affleck / Garner home, their children must really like it.

I mostly remember the film for the Evanscenece songs.  (which isn’t a great sign)

Bring Me to Live

Thanks to DJ Pasa for hosting this video!

Thanks to ARC7409 for hosting this video!

Thanks to CinemaSins for hosting this video!

I didn’t want to go negative with this post, as I do enjoy the film – though the graphics are super dated.  There were two moments, when I watched it in the theater, that struck me as just plain wrong.

One being when Joey Pants throws the match down, to reveal the Double Ds.  Like, seriously?  That is a crime scene!!!  You can’t just be throwing matches on the ground and the cops are more like “whoa cool” instead of “hey buddy, you just tampered with evidence!”

The second, and it is right at the end, so you leave the theater thinking about how silly the moment is.  When Joey Pants (who did a decent job as Ben Urich) has his expose on Daredevil, all written up.  He then presses the delete button, just once, and it instantly starts erasing the entire document from word to word, in backwards order.  The heck!?!  I’m glad my computer doesn’t have that “delete everything” button.  They should color that death button something else, so that you don’t accidentally erase your entire thesis paper!  Good grief, that was bad!