It is a happy happenstance (happistance?) that I got to review these posts back to back.

Avengers Mansion.  Hours ago.  Havok is watching his older brother make an awesome speech on the news.  Captain America comes into the room, there is a problem with his brother.  Havok wants to know what Scott has done now. 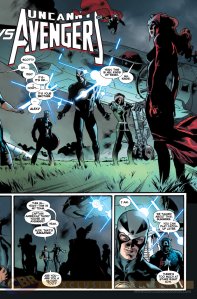 The All New X-Men were pulled from Uncanny X-Men 8, so when Beast states that Scarlet Witch is from the Brotherhood of Evil Mutants, that is all he knows her from.  At this point, she appeared in issues four, five, six and seven, so the team knows her pretty well as a villain.  She would show up again in issue eleven but they will never know that.

Beast didn’t know Scott even had a brother.  Scott hasn’t even thought of his brother in years.  Scott wouldn’t see Havok in the proper continuity until issue 54 of Uncanny X-Men.  The two brothers hug.  Scott is so impressed that his brother is a member of the Avengers.  Not just a member but leading a team with Captain America and Thor as members.  That is pretty impressive!

Scott and Havok go and have themselves a chat.  Havok explains that he was an X-Man at some point.  Scarlet Witch and Thor know what it is like to have a brother, so they want Havok to have this moment.  Havok has to tell his young older brother that they haven’t been closed in a while.  Scott tries to play it off like his older self didn’t kill Xavier but Havok states that that is exactly what happened. 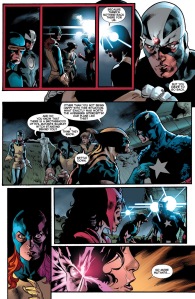 Havok tells Scott that the Original Five have to go back in time.  Wolverine confronts Captain America.

Kitty wants Bobby and Hank to calm down about the Scarlet Witch.  Jean, because she is a psychic brat, she reads Wanda’s mind and sees the image of the sentence fragment that ruined mutants everywhere.

Jean knows that Wanda is a murderer.  Jean just loses her mind.  Wanda is mostly upset that her privacy was invaded.  Jean then hits every body with a telekinesis wave.

Kitty wants Jean to calm down.  Jean can’t believe they let Wanda stay as an Avenger, which is pretty amazing.  Wanda casts a spell.

Jean is now in quicksand.  Rogue can’t believe there is a yet another out of control Jean in the world.  Captain America wants Jean to calm down.

Jean now has the notice that mutants were in the millions and then they were under 200.

The Bank of England, London.  Sabretooth and Lady Mastermind are causing all sorts of destruction.  Lady Mastermind is wondering why they are stealing all of this money, they have enough to buy a small country.  Lady Mastermind talks to Mystique about she actually cares about Xavier being dead.  Look at Bendis setting up six years ago that Mystique loves Xavier!

Even while Jean is stuck in the ground, she is gong on and on about Wanda being a monster.

Cyclops wants to know why they are in trouble.  Wolverine wonders too.  Captain America shows some footage about how the Original X-Men are robbing all types of banks.  I like the lady revealing how much she doesn’t know her X-Men facts.  I imagine they don’t get much news footage.

Kitty wants Bobby to shut up.  He’s not doing very well in this issue.

Wolverine reveals that it couldn’t be the Original Five X-Men. It must be a shape shifter like Mystique.  Scott defends Mystique, makes sense that a 17 year old would be into Mystique – lots of possibilities.  Kitty tells Scott that he doesn’t know the real Mystique.

Wolverine keeps calling Scott, Slim, it seems weird.  Also weird is Rogue having asides with Wanda, are they friends?

Rogue says that Mystique could be Jean but she used her powers earlier, so it couldn’t be her.

Captain America wants Kitty and Wolverine to take the students back to the school.  Kitty tells him that they can take care of themselves.  Good for her!

Scott is all about this being a mutant problem so there should be a mutant solution.  Rogue and Wanda explain that there is no more mutant and human problems, just people problems.

Havok tells Scott that he loves him.  aw

A Summers Hug!  Who even knows when that happened last time.  I thought they high fived but that must be another issue. 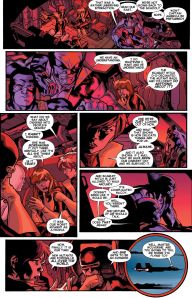 Kitty explains to Jean that M-Day was a horrible day and that the mutant community is just now coming out of it.

Wolverine is not taking Cap’s advice and is going to still pursue Mystique.

Issue ends with Mystique, Sabretooth and Lady Mastermind surrounded by all of their sweet stolen cash.