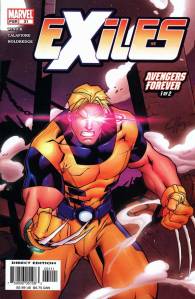 Avengers Forever Part One of Two

Took us a year but we finally got around to reviewing part one of this story!

The Exiles team is – Mimic, Nocturne, Morph, Sunfire, Sasquatch and the awesome Magik.

The issue opens with some guards investigating a break-in.

There is an ad for Grind, a film I sort of want to watch.  We can add Mike Vogel to the cast of stars of the film – along with Jennifer Morrison and Adam Brody.

The intruders are, unfortunately, The Avengers – Captain America, Giant Man, Falcon, Wasp, Polaris and Hawkeye.  Polaris is the odd member as twelve years later, she still isn’t an Avenger and I doubt she ever will.  Though I doubted Havok would be an Avenger and that turned out relatively okay.,

The Avengers make short work of the SHIELD agents.  The poor agents try to use holy items but Captain America just laughs at this feeble attempt.  The entire team are vampires!  Vampengers! if you will.

The Mission District of San Francisco.  Teep’s Coffee, Internet Cafe.  1:28aam.  The Exiles team is consulting with their Tallus, their version of Ziggy from Quantum Leap.  They know about the Vampengers.  Nocturne can’t believe Captain America is a vampire.  What’s next, Reed Richards . . . King of Latveria?  Daredevil the Kingpin of Crime?  Both stories actually took place in the Proper Marvel Universe.  Morph found all of this information on the Internet.  So it is common knowledge.

Mimic recognizes where this universe must be split from.  The classic tale of Captain America fighting Baron Blood.  That story ends with Cap beheading the Baron with his mighty shield.

Then there is this awkward ad – 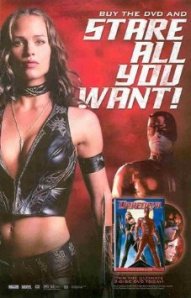 I’m sure Jennifer Garner loved this advertisement.  I would recommend the Daredevil : Director’s Cut, it is so good.  Basically instead of Jennifer Garner / Elektra scenes, we got story and content instead.  Who would have thought that was what the released film was missing!?!

Heather, for the benefit of new readers, asks what that story is all about.  Instead of the beheading, Baron Blood bit Captain America, turning him into a vampire.  Cap later killed the Baron and became the King of All Vampires, so the basic anit-vampire artifacts don’t have any affect on him.

Blink is no longer with the team, so it is up to Mimic to figure out how to use the Tallus and learn their goal.  He just knows that they have to stop Captain America from enslaving the entire city.

Then we get how great this version of Magik is.  Her solution to stopping Cap is to just kill him.  It is the quickly and sure firest way to ensure their goal.  Mimic has too much respect to just kill Captain America.  Plus, this gives him a chance to confront Magik with all of her decisions up to this point.  Magik, to save the day or to send them to their next Earth, almost killed a Moira MacTaggert, crippled Black Panther’s son and may have killed Morlock children.  Mimic tells her to stop being so quick and vicious in her methods.  One does not merely order Magik what to do.

Magik decides to get up close with him and asks what he will do to her if she doesn’t, maybe a spanking?  This doesn’t amuse Mimic, at all.  Mimic, being too bothered, has to leave the room.

Sunfire looks annoyed.  Magik walks over to her and asks if she ever gets lonely.  Sunfire responds that she isn’t lonely now but maybe later.  Which I like this flirtation, it doesn’t go anywhere, from what I remember.

Morph has located the now retired Union Jack, and Mimic wants him to get a phone number for the British hero.  They call the former Union Jack, at his Falsworth Estate, he informs them about how there are only six locations in San Francisco that Captain America could cast that wide of a spell.  The page ends with us being able to see the damage to Union Jack’s face, which is all scarred from a burn wound, like Mel Gibson in The Man Without a Face – which I was all about Mel Gibson playing Two-Face during the early 90s just based off of that film.  They went with Tommy Lee Jones instead, two years later.

The Exiles have two bags full of holy relics, they are as ready as they ever will be.  They are either going to steal the enchanted item or kill Captain America – Magik wanted to do both but that got vetoed.

The Vampengers are building an alter, it has to be made out of wood, which upsets Polaris.  While she is belly aching over that, she gets a wood stake through the heart.  Magik just killed Polaris, which irritates Mimic.  She is already killing suckers.  Blood suckers.

Sasquatch fights Falcon.  Morph fights Wasp.  It makes sense the two leaders fight, so we get Mimic v Cap.  On this world, Mimic is a mercenary.  Giant Man fights Sunfire.  We are reminded that one should never fight someone with fire powers as she burns him.  Typically, there is no coming back from that.  That will leave a scar.  Hawkeye successfully shoots an arrow into Sunfire’s arm, another thing that will leave a scar! 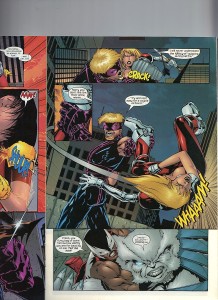 This all happens while Giant Man, Sunfire and Hawkeye were trading quips in the fight.  Which is something that has always confused Magik, why waste the time to banter.  While she is complaining, Hawkeye is able to flip her upside down and throws her against the ground.

Sasquatch levels the playing field by taking both Falcon and Giant Man through the roof and onto the top floor.

Mimic and Captain America, who I wish I could come up with a clever name.  King America, Captain Vampire, King Vamperira.

Captain America brags to Mimic about how not all heroes are vampires but most know to leave him alone.  Mimic is tired of all of this chit chat and he uses his bone claws to separate Captain America’s head from his shoulders.  The threat is done.

Issue ends with Cap’s body standing up, retrieving his head and putting it back where it ends.

Cap wants to know if Mimic wants to try again.  Which is a pretty boss move.

Part Two can be found here :

I do like how Mimic of Exiles – instead of having the Original Five X-Men’s powers, has the powers of Wolverine and Colossus.  Those are his two main powers that he features.  This issue he also has Cyclops’ optic blasts.  Really, all one needs is those three powers.  Got the range attack, got the claws for close combat quarters and the armor for protection.  No wonder that guy is the leader.

This website has a pretty nice review and some individual panels if you want to get a taste of the comic itself.