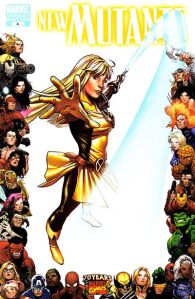 Timely being the company that will become Marvel, but it is still an odd thing to celebrate, as they should have waited five more years to do the 75th Anniversary, an anniversary people actually celebrate.d

Border done by Jim Cheung.   Unfortunately, Kitty didn’t make the border to this one, so she is only on the 25th Anniversary and the Women of Marvel variants.

I wish I owned any of these but I do own this :

Marvel 70th Anniversary Frame Art Collection, that contains all of the variants as single page art pieces, which I would buy more of these Variant Collections if they made them.

That’s what happens when Kitty doesn’t make the border, my desire of them gets cut way down.