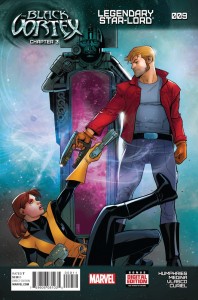 I had to add the Phil Noto variant cover to my Wishlist.

Rocket has changed his mind, he doesn’t like the new looks.  Storm threatens to fry all of Beast’s fur off, which seems overly harsh.

I do like seeing X23 with the team again, she really doesn’t believe in Wolverines.  I mean, she does and she – now that she is the new Wolverine, can be in multiple titles. 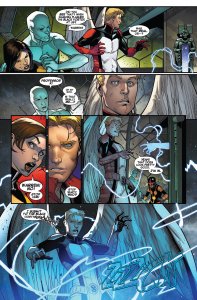 Angel seems very eager for a power upgrade.  Once he becomes Archangel, it was like the previous twenty years was a waste.  Bobby wants Professor K to notice Warren’s interest in the mirror.

Warren is the third hero to submit, and now he is a mixture of Archangel and Mutant X’s Fallen. 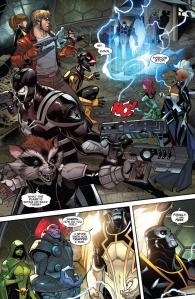 Kitty wants Beast to tell everyone to stop, I’m not sure why he would now.  Warren is able to take off his face mask, he wants to live out in the stars.

Bobby wants to see, again, how cool he would be.

Kitty wants Beast, which seems silly now that the damage is done, to reverse Warren.  We don’t know if this process is reverse-able.  With Secret Wars 2015 happening right after this, this could be the ‘permanent’ change until the . . . whatever it is Secret Wars 2015 accomplishes.

Beast gives Kitty the lowest of insults, that she is being like a human arguing with mutantkind.  Kitty is concern with out Warren’s change could change time.

Bobby is ready to submit.

Storm tells Rocket to meet her on the far side of the moon, is she asking Rocket out on a date?

Bobby calls Draz, Oscar the Grouch, and Drax tries to respond to the Grouch portion of the name.

Kitty tries to remind Beast of his original responsibilities to keep the Original X-Men safe.  He has changed his outlook on that, he is merely there to realize their potential.

In all of this confusion, Storm and Rocket has grabbed the Black Vortex.

The Flying Fortress.  Nearby.  Someone tells J-Son that they can’t locate the Black Vortex or the heroes.  Thane and the Brood assistant isn’t that impressed with J-Son.  Thane really wants the Black Vortex now.  J-Son sends Father Diablo to Brennan-7, on a secret mission – which most likely be that he is to kill Thane’s Flock.  Czar reports that the heroes are on the Spartax moon.

Storm is flying with the mirror as Beast, Gamora and Warren – have caught up to her.  We get the heated scene that was hinted at between Gamora and Storm.  Storm, amazingly, holds her own against the suped up Gamora. 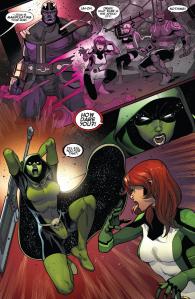 Thanos arrives to tell Gamora, his daughter, to stop fighting.  Beast shouts that Jean is behind the charade.  Magik was there to teleport Jean to the battle.  I’m not sure why Drax is there.

Gamora attacks Jean but the sword phases through her.

Good ol’ Kitty Pryde for the save!  Kitty still claims Jean as a student, even though she has given up living on Earth but I guess there has only been a day since she made that decision.

Kitty and Drax had a plan and Kitty lets go of Gamora, Drax breaks her sword, so that’s why he was there. 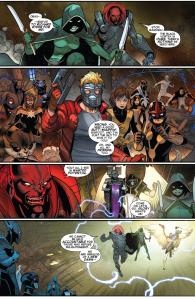 Gamora tells Drax to say hello to Richard “Nova” Rider for her, as she is going to kill Drax.  Which seems to be in poor taste.  It would made more sense if the next issue was Nova’s tie in, but that is coming.  Beast wants the fight to stop, as they have the mirror again.

Quill gets Beast’s attention, all of the heroes are prepared to fight the enhanced heroes.  I need a name for those three.  Now that I think of it, Angel was the first (and only) to join Cyclops’ side, or better yet, to ditch his fellow time travelers, at the first instance.

Beast calls them, Heralds of a New Dawn, which seems wordy to me.  They fly away with the Black Vortex.

The Heralds take off on a ship, I’m not sure who’s ship that is.  Rocket calls them, Grade-A Flarknards.  Which I will have to keep referring to this issue for that name.

Quill dares to give Magik orders, and she shuts him down.  She needs a destination.  Her calling him, loverboy, is cute.  Captain Marvel wouldn’t be able to catch up to them.  Jean can’t telepathically track them either.

Pryde takes this chance to yell at Quill.  Kitty still feels responsible for the students, so she is most likely regretting her decision to stay in space. 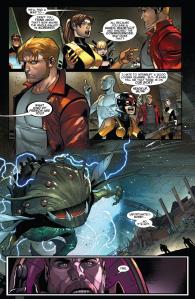 Pryde is upset, as they just jeopardized the entire galaxy.

Just then, the floating fortress is about to open fire. 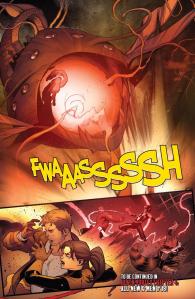 Which is a pretty great cliffhanger!

Man, Medina and Curiel killed it this issue.  Up next, and in two days, is All New X-Men 38, Chapter Four!  I am still really enjoying this crossover.  I have no idea where this is heading.