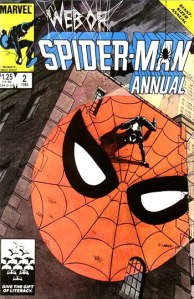 The Longshot team of Nocenti and Adams came back for this giant sized annual.

I own this for the Magik appearances!

According to the polybag I keep the issue in, this comic cost me eight dollars!

Dead of night at Xavier’s School for the Gifted.  Warlock is watching ten television sets. 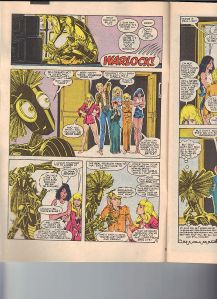 Apparently, he is watching it very loudly as the rest of the team is woken up.  It is always interesting to see what the heroes wear to bed.  Illyana is the only one in what could be a sexy outfit, which makes sense.

Warlock is upset that he has angered his friends.  Illyana just wants Warlock to get some life experience from the real world and not from televisions. 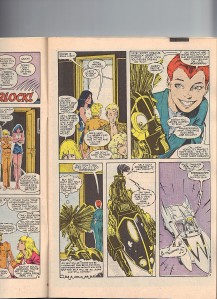 Warlock doesn’t understand what real life is.  People think Illyana is going too far but it had to be said.

Wolfsbane tells Warlock that New York City is pretty real.  So he takes off for the big apple.

Spider-Man, in his black costume, is swinging across the city.  He comes across some small animals on the street.  The poor little critters have pieces of cybernetics sticking out of them.  Spider-Man enters the laboratory the animals are coming out of.  The Animal Liberation Front are the ones releasing the creatures.  Spider-Man knows it isn’t right but sticking machinery into little animals, isn’t right either.

Warlock has taken the form of David Letterman and attracting lots of attention, so he changes to another person.

Spider-Man has a ASPCA Representative tell him that the lab has to be shut down.  The wires sticking out of the animals are hurting them in a way.  Warlock sees Spider-Man and goes into a toy store.  People think he is a toy and he makes friend with a scientist.  He takes him home, where we learn that his wife is also a scientist.  Warlock gives up a piece of his skin for examination purposes.  Something happens and Warlock gets supercharged by energy.

Spider-Man is still swinging around.  He hears giant steps and swings around a corner.  Godlock, Warlock as Godzilla, is stomping around, holding the lady doctor.  Spider-Man tries to move Warlock in a safer direction.

There is a subplot dealing with the business of Peter having to set up his camera to take pictures.

Warlock’s main personality is slowly coming through.  Then he turns into King Kong.  So naturally, he starts climbing a building.  King Konglock.  That isn’t clever at all.

Warlock turns into a rocket and blasts himself off into the sky.  It was the only way to get rid of all that excess energy.  Don’t worry, Warlock comes back to the ground as a giant black puddle of goo.  He’s okay.

That night, the New Mutants welcome Warlock back to the mansion.  Warlock has decided to turn into a human shape and will attempt to dream, which is what caused all of this in the first place.  He wants to dream and New York City is where dreams come true.

Not a a bad issue.  It feels more like an extra length Marvel Team-Up with Warlock issue.

Here are our stats :

At 317 views – our most popular comic review has been; Death of Wolverine 3

Which, again, is the reason why I’m all for turning this blog into a Big Brother blog, as Big Brother related posts make up four of my top five posts.

Another item I am quite proud of, and will post about it again once it happens – we are a mere 300 views away from beating last year’s number of views!  That is outstanding!  Which really, is all about the visitors to the blog that makes that possible so thank you again.

What I’m most proud of, and you have already seen it before you saw this, is the new theme!  We went from the retired Vostok to Parament, and I couldn’t be happier!  There may be some slight edits as the transition moves but I’ve been really wanting a right side bar for the longest time.  After one of the nice WordPress team members assured me that I wouldn’t lose all of my information or weird formatting issues wouldn’t happened, I’ve been just waiting for this day to bring the new site online.

At first, I didn’t care for the Orange aspects, but it is growing on me.

Come back tomorrow for the beginning of our . . . Ant-Man Celebration!!!  It isn’t that many posts, so calling it an Event Month, doesn’t feel right.