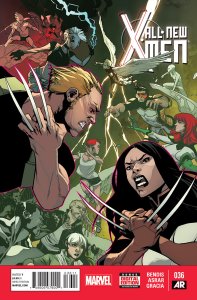 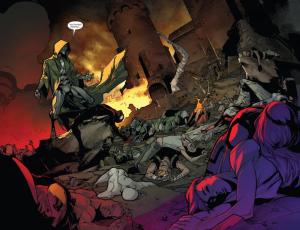 Issue opens with Doctor Doom standing over the fallen X-Men.

Doom lifts Spider-Man up, he is very impress with Norman Osborn and wants to learn what he knows about genetics.  Doom is willing to dissect Spider-Man to learn the secrets, a threat that doesn’t happen in many comics.

All New Jean starts trying to play mind games with Van Damme, sadly, this is the first Doom she has ever met.  He starts blasting at her.  Van Damme claims he is the Sorcerer and Scientist Supreme of the Ultimate Universe.  I believe Hank Pym is the Scientist Supreme of the Proper Marvel Universe and of course, Doctor Strange is the proper Sorcerer Supreme.  Neither are alive in the Ultimate Universe.  Jean tells him that she isn’t trying to win, she is only trying to distract him. 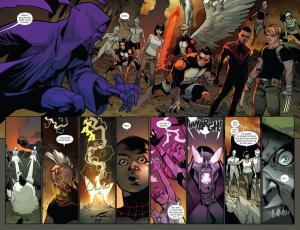 Jean was waking up the X-Men.  The Icemen freeze Van Damme, Storm lightning strikes him and the Jeans psychic hit him.  Shadowcat is about to phase him out of his armor. 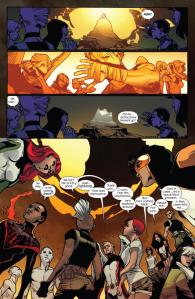 Instead of being defeated by the greatest X-Man, he blows himself up.  The X-Men are not sure if what they saw really happened. 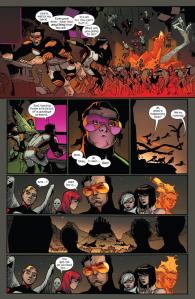 Beast wants his revenge on Van Damme and asks X23 to watch his back.  He instructs the others to destroy as many Doombots as possible. 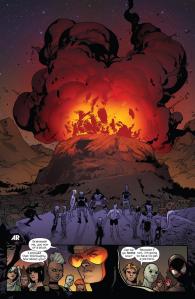 Meanwhile, the Ultimate Female Access (she looks much younger here) is viewing the Old Man Logan timeline.  Which I imagine Bendis knew he was going to be doing an Old Man Logan tie-in for Secret Wars 2015 and giving us a slight taste of it here.  I guess he didn’t write Logan out of character, from what I can tell.  Was Thing in that storyline?  She shuts it down before the page ends.

She opens another portal and sees Volstagg of Asgard. 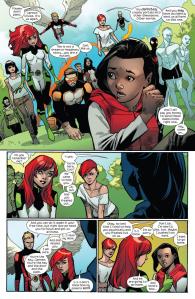 All New Jean calls the young mutant, Carmen, and we are all reminded about her name now.  Her full name is, Carmen Cruise, I love that alliteration.  Which now that I think of it, Bendis does do quite often, makes the characters seem like they are instantly classic.

I like Beast’s “this is not a dream or imaginary story” line.  Ultimate Iceman wants the All New X-Men to go back home.

I guess Carmen is like Access, and she is constant in all universes but she was in high school or college, right?  She looks like a young kid here.

Jean tells Carmen that is all things; a key, a door and a path. 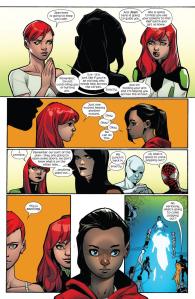 The Jeans are going to calm and guide her.  I like that X23 has a plan for if anything comes out of portals.  They are not expecting Carmen to get it right.  What are the Jeans looking for exactly, when they open a portal?  The X-Men at the Jean Grey School, listening to Xavier’s Last Will and Testament?  Spider-Man wants to know what X23 thinks is going to pop out of a portal. 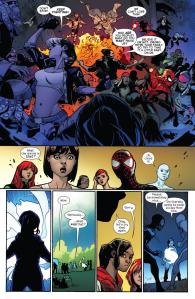 The first portal they open together leads to House of M.  I do not see HoM Kitty there, only Rogue, Wolverine and Spider-Man.  Kitty should be at that final fight.  Is House of M a dimension that one can get to?  I guess we have revisited there in this storyline and various other miniseries such as, House of M : Civil War.  Makes sense that Bendis would feel comfortable showing one of his few Alternate Universes that he created.

Ultimate Shadowcat swears, she’s been hanging out with Bombshell to much! 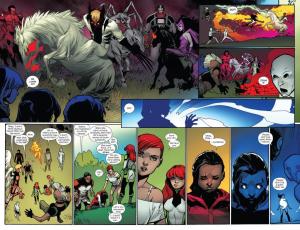 I don’t recognize that universe with demons or some such nonsense.  Apparently they are the Horsemen of Apocalypse from Bendis’ opening arc on Avengers (Volume Four) with all of the time travel and alternate universes.  Apocalypse and his horsepeople are – Red Hulk, Wolverine, Spider-Man (with the arms) and Scarlet Witch.

Poor James Howlett, must be constantly disappointed that he doesn’t have alternate versions of himself, they are all his father.

Beast tries to give some advice and Carmen tries one more time.

All New Jean sees Superior Iron Man and the new Thor.  She reads Tony’s mind and confirms that it is disgusting and that is the world she calls home.  All New Iceman is all too ready to go home. 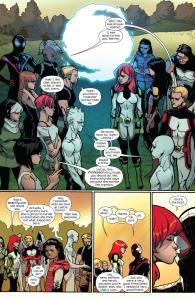 The two teams are making their goodbyes.  Ultimate Iceman wants All New Iceman to be gone.  Shadowcat wants them to listen to her counterpart, as she sounds like a genius.  Angel is worried that Kitty is going to kill her young teammates.  All New Jean kisses Spider-Man, as he was a good friend. 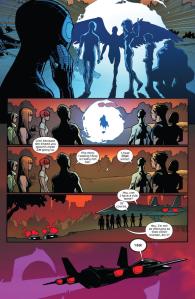 All New X-Men leave for their world.  Jean tells Spider-Man that she isn’t going to kiss him.  Redheads, Miles has the same luck as Peter did.  Diamondback from All New Ultimates was also kissed him.  They all confirm that Iceman is annoying in every world.  Which I think is pretty harsh, as Ultimate Iceman isn’t annoying at all.  Well, he was with the whole Rogue / Shadowcat love triangle but that was more of a dick move than annoying.

All New X-Men reunite Carmen with her mother, who takes Carmen being a mutant pretty well.

The issue ends with Beast wanting to end mutant bigotry and he is going to use Jean to accomplish it.