So San Diego Comic Con 2015 was as exciting as I thought it would be – on the news front.  I figured I would just do one post, for the entire event.

Of course, my friends who were lucky enough to go this year, all had amazing photos and stories that I’m glad they shared.

Here are the stories that caught my attention –

Ben Affleck to co-write (with Geoff Johns), direct and – naturally – star in the next solo Batman film, which would come out before the first Justice League film.  Which I’m all for, and I can only imagine, was discussed prior to him signing his original contract.

Halle Berry would jump at another chance to be Storm.  Which I wouldn’t mind a solo Storm film, as long as it was both good and maybe featured another mutant character, maybe a best friend type of character that was younger than her.  perhaps.

As far as I can tell, no real news and barely anything was really said.

The same for the All New All Different Avengers.  They don’t have Tony Stark’s money so it must not be Tony in the Iron Man armor, right?

ROM and the Mirconauts are coming to . . . IDW!  Too bad Marvel-Disney couldn’t just buy the rights.  Then they could start reprinting ROM appearances again.

I’m not a fan of the Newsarama does their coverage, it just doesn’t load right for me.

Animated Killing Joke is coming!  This reminds me that I still really need to watch the two part Dark Knight Returns.

Not much revealed at the Cup of Joe panel.  I did learn that Hank Pym merged with Ultron, so that’s something.  The All New All Different Avengers are suppose to have the feel of Claremont / Byrne / Austin X-Men, lots of character interactions and epic adventures.  Time will tell.  There will be an Avengers Zero issue that should set up that line.

First look of Oscar Isaac as Apocalypse, it is just a picture of him, in shadow but it looks like they are going for his head.

Thanks to Warner Bros. Pictures for hosting their video.

I found the Warner Brothers Panel!  (minus the cool clips, of course)

Thanks to YouTuber moviemaniacsDE for hosting the video!

I could listen to Affleck tell Bale stories, all day!

I didn’t even know that Jeremy Irons was going to be in this AND he’s Alfred, that’s pretty awesome.  Amy Adams, being in this, makes sense but it felt new too.  I couldn’t make out the “red capes are coming” until I turned the volume way up.  Krytonite, is in there.  Bruce Wayne being in Metropolis during the conclusion of Man of Steel, is interesting.  I like seeing Wonder Woman in this.  Was that a scene set in the Middle East?  This film does feel epic.  Oh and Ma Kent’s “be their angel” but also “don’t feel the need to do anything, you don’t owe them anything” reminds me of Pa Kent’s “maybe” you should have let those kids die.

I wish I could save and post the Art Adams Guardians of the Galaxy image but that definitely looks like Kitty Pryde, but with a Star Lord mask.

My buddy, Mark Maslauskas got me the image! 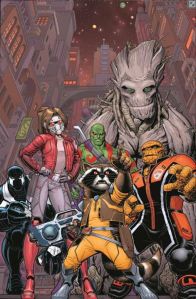 Thanks to Flicks and the City for hosting the X-Men Apocalypse panel.

They have a slew of the videos from various panels of the con.  I have to check these out when I have more time.

Here is a fun video of the new record of most superheroes in a picture!

Thanks, again, to Flicks and the City.  I imagine the last holder of the record was the original Avengers SDCC from two years ago.

There is a new title, Spidey, that deals with a teenage Spider-Man – so yet another all ages Spider-Man title that will possibly last twelve issues.  Spider-Man 2099 is getting a new costume, which the original is so classic but we shall give it a chance.

The finale panel, that I was tracking – is the Women of Marvel panel

Not much was revealed in these panels, but we figured that at the offset.  I didn’t know that Marguerite Bennett was wring A-Force and Years of Future Past, so this makes me want to read A-Force as I’m loving the latter series.

So that is everything that I saw of SDCC 2015.  Maybe one day, I can go back to one again.

Yesterday, we finally outdid November 2014 as our best month ever, in terms of views.  Thanks again everybody!