I didn’t realize that I was going to upload nearly the entire issue.  If there are problems with that, are there?, I will take down the non-Ogun speaking pages.  Let me know.  I’m not sure, the few websites I use to get the images from, I notice they try to limit it to eight or ten pages, which I guess is nearly half the issue – which seems like a fair limit.

The Oort Cloud.  465 Billion Miles from Earth, a comet is coming.

The Changeling.  Five Miles Above Finland.  Mystique is still in a huge blue Hulk like form, she is blocking everyone’s attempt to jump off the plane.  Lady Deathstrike points out that they all know that because she is in a larger form, it isn’t like she is that much stronger.

Mystique was only doing that for dramatic effect.  X23 refers to Wolverine’s body as a statue, so now I feel like – if Soule is happy with that term, I am too.  I only worried that it was implying (for anyone that wasn’t reading along) that someone made a Wolverine statue as oppose to Wolverine being an adamantium statue.

X23 stating that they lost the statue to the X-Men is odd, as she is one of the X-Men.  She isn’t sure why they are going to stick around with the Weapon X Program rejects much less these fellow villains.

Shogun reminds her that the rejects still know the codewords.  They no longer have Wolverine but Shogun still wants to use the Wolverines’ healing factor to cure the Paradise folks’ death clock.

Sabretooth isn’t going to tolerate much more of Shogun’s nonsense.  Of the Paradise folks, only Shogun and Junk are still around.  Shogun can hold his own but Junk is way out of his league.

Mystique claims the leadership role of the team, she defeated the Wrecking Crew – which must have happened in the second issue, which I don’t own.  For some reason, Mystique shifts her head into the head of Cobra Commander.  Lady Deathstrike states that is the head of her father, but I’m not sure how she pieced that together.

Mystique shifts into Angel, to taunt X23.  Mystique knows that those two had sex, but I get the impression that relationship was more of a one night stand type of situation.  Mystique takes it as far as to put the thought in X23’s head that the next time she had sex with Angel, it may be Mystique.  Proving that she can always go farther, she tells X23 that she may take her form and have sex with Warren, doing all of the things he is too afraid to ask her to do.  Further salt on the wound, she hints that she knows X23’s sexual past.  Marvel really isn’t going to let X23’s prostitution disappear.

Mystique promises everyone’s heart’s desire, if they stick with her. 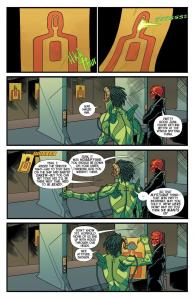 Junk is trying to get along with Shogun.  Junk is still on the plane as he never left it, which I don’t even think I noticed.  He was taking care of Daken.

Shogun brings up the excellent point, Mystique should kill these two, while they sleep, and have two less worries in the world.

Daken interrupts the conversation to tell Shogun that Mystique wants to talk to him.

If I had my arm and eye rip off, I will be pretty depressed.

Shogun tells Junk about how much Neuro messed up, and that Lady Deathstrike wants to kill all of these Paradise fools. 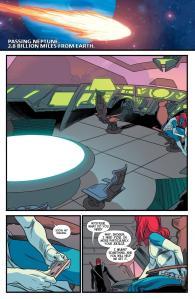 The first page where we get Ogun’s voice!

Skel and Neuro are working for Sinister, if he is smart, he has those two dead already.  Shogun is surprised about Mystique’s gentleness.  Betrayal is common in this line of work.

Mystique tells Shogun that Lady Deathstrike may be attracted to him.  She wants him dead but wants to have her fun too.  Ogun warns Sharp that Mystique is manipulating him, he claims he knows but we all know he is going to be manipulated so much.

Mystique wants him to steal the Zhulong (Sun Dragon) from the National Museum in Taipei. 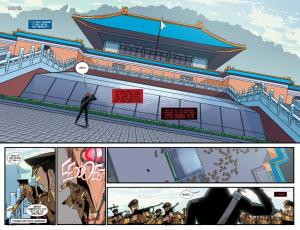 Taipei.  Ogun is fully supporting Sharp in this en devour as he wants to fight all night long.

How confident is Sharp’s “Hey!” that is a baller move!

An old military man is looking at the sword and he is killed by a younger man.

Shogun gets so caught up in the fight, he starts to slice dudes in half.

Mystique shouts at Shogun and he comes a running. 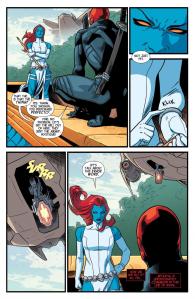 As they are waiting for the plane, Mystique wants to discuss her Erase word.  Betrayal is quite common in this business.

250 Thousand Miles From Earth.  The comet keeps on coming.

Uotsuri Island.  50 Miles Northwest of Taiwan.  Mystique is looking over her check list.

The last one is not checked yet.  She starts a holo-simulation, that looks like it is on a cassette tape. 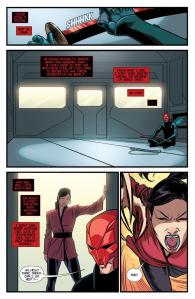 In a private moment, Ogun tries to get Sharp to join Sinister, as he may be able to cure their mutual decaying issue.

Lady Deathstrike enters the room and Ogun would like to take advantage of her attraction while Sharp seems to be a tad scared of her. 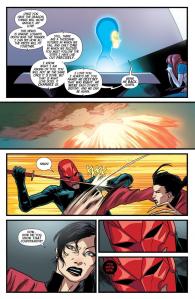 One of the cool things about the character of Destiny, is that she is a writer’s character.  She knows the future, so a great writer can use her to set up what is to come and pull everything off in a very compelling way.  Here is hoping that Soule can do that.

Destiny, apparently, made a slew of tapes as well as her diaries – which I may be one of the last hundred or so who still remembers those.  Wolverine’s death kick started a sequence of events.  Now that Mystique has the Dragon, things will move quickly.  Destiny wants to be restored to life and she loves Mystique.

They kiss and Shogun’s silly mask is so sharp, that it cuts into Lady Deathstrike’s face.  No one ever worries about kiss-ability when developing a mask.

That is nice that Destiny always loved Mystique and that she can now say that in a modern comic instead of having it be hinted years after her death.

Mystique cries and Lady Deathstrike is amused as something hits the plane.  Most likely, the comet.

It isn’t a comet but some dude in a Wolverine mask, if it was made for a baby.  I guess we will find out in a week, as Marvel Database doesn’t take a guess at who this is.  Who does Wolverine know, in space, that would call him his best friend.  Well, Wolverine is his best friend, I doubt Wolverine would consider him his.