This issue is only my third with Superior Spider-Man issue, but I must say, I really dig Otto Octavius as Spider-Man.  I wouldn’t mind getting several trades of the character.  I also enjoy that it was a limited time, so it probably is super easy to have as a collection of trades on the bookshelf.  Now that I think of it, this is the fourth appearance that I own.  A+X 11 (Superior Spider-Man & Cyclops – I own it for the Thor and Magik team-up); Avenging Spider-Man 16, where he teams up with the Jean Grey School, including Kitty and Lockheed; and Wolverine Volume Five 2 and 3, where he meets Wolverine and gives him Wolverine’s armor insulated costume.

There are three hardcovers that collect the 31 issues of the series and then the Amazing Spider-Man : Spider-Verse, which collects the final two issues of the series.  That might be how I read Spider-Verse.  I tried to do a search and didn’t see Ben Reilly has part of that mega-crossover but maybe that was more on how comicbookdb has the character listed.

Okay, so the Ben Reilly who was involved with Spider-Verse, was from Earth-94 – which makes sense as that’s when the Clone Saga started plus Ben Reilly is dead in the Proper Marvel Universe.  So I will need to track down whatever trade collects Scarlet Spiders 1 – 3, Spider-Verse 1, Spider-Verse Team-Up, and Amazing Spider-Man 9, 10, 11 and 13.

Okay, that’s enough of that, but I just won’t get another chance to write about Spider-Verse and I sort of wanted to write this so that I can one day refer to it.

Thankfully there is a recap page.  Otto Octavius took over Peter Parker’s body, which we knew.  As Peter, he fell in love with Anna Maria Marconi.  A temporal distortion occurred that brought Spider-Man 2099 to the present, cool how Parker’s company (that Octavius started – I believe) Horizon Labs eventually becomes Alchemax of 2099.  Back in Superior Spider-Man 19, there was a temporal implosion and Otto was missing for 24 hours.

Horizon Labs.  Several Months Ago.  Otto recalls the previous paragraph and we jump into the crux of this issue.  Editor Nick Lowe references, on the official first page of the comic, that this comic occurs during Superior Spider-Man 19.  You know what would have made this comic worthy of $4.99, including issue 19 or at least, the pages that this issue takes place in-between.  I would have preferred those pages, over the back up feature.  Which is nice and all but now I’m curious about what happened in issues 19 and 20, was Spider-Verse referenced in those last ten issues of the series?  This issue ends with such a build up to Spider-Verse, that I’m not sure how the last ten issues isn’t setting it up.  Does it?  Or does he conveniently forget this information and then it comes back to him?

We get to the page why I bought this comic.  Otto witnesses several timelines, including Days of Future Past!  Other ones are Old Man Logan (which will be referenced later), 1602, Earth X, Future Imperfect and Deathlok, for some reason.

Otto lands, and he is in 2099 – which he feels makes perfect sense, as this era is missing their Spider-Man.

I know I’ve typed this before, but I really do dig the Superior Spider-Man costume.

People recognize that a Spider-Man is back, one dude calls Gabriel, Miguel’s brother.  Miguel being Spider-Man 2099.  Public Eye approaches Otto, they are surprised that he is taking the fight to them.  Which isn’t what Miguel does, he typically just runs off.  I do enjoy this revisit to 2099, as it is such a fun trip down memory lane of Peter David’s Spider-Man 2099 run.

Gabe come along and gives Otto a lift.  He references how Otto must be Peter Parker.  Nick Lowe gives us a handy editor note that Otto has purged all of Peter’s memories, so he doesn’t recall the events of Spider-Man Meets Spider-Man 2099.  Which I didn’t know that he eventually purged those memories, as last I knew, Otto was using that knowledge to fake pleasantries with anyone who Peter use to know.

Gabe takes Otto to Miguel’s apartment and Otto dismisses him, he doesn’t need a tour nor does he need the holographic interface explained to him.  Otto requests information about the technology he needs to create a time machine.  He gets them pretty easily.  He visits familiar locations – Stark / Fujikawa North American Headquarters and The Alchemax Building, Office of Tyler Stone.  Otto even takes out Vulture 2099 – Venture.

“Downtown.”  What’s Left of Old New York.  Otto is finishing his time machine, he has also changed the holographic display from a generic dude to a replica of Anna Maria Marconi – which I imagine is why that was included on the recap page.  Otto has made it possible to have Holo-Anna be connected to his webshooter.  He has made a portable time machine, and he is a genius enough to make it that it has a default bounce back to 2099, in case it doesn’t work out.

This ride through the time stream is much better than his original one, seen as the first image above, well second image after the cover being the first.

I keep typing Otto, but I forgot about the fan base name for him, SpOck (Spider-Octopus) that I could pepper this review with.  I just don’t want to type “Superior Spider-Man” more than a few times.  Though, SpOck, does seem silly to use more than a few times as well.  I guess I can (and probably should) just call him, Spider-Man, but he seems better than that name.  Superior, if you will.

Otto sees that Reed, Thing and Human Torch are laying dead.  He comments, aloud, that he always figured Reed’s arrogance will be his own downfall.

We get the first death of Spider-Verse, The Spider-Man from the first issue of What If, Volume One, What If Spider-Man had Joined the Fantastic Four?  Which is pretty intense, that’s a Spider-Man that we know!

I do like how Otto’s reaction is just merely move on to his quest to get back home.  But he can’t avoid dead Spider-Mans.

The House of M Spider-Man, some version of a Civil War Iron-Man and the worst of them, Spider-Man Armor from Web of Spider-Man 100!  The armor that didn’t even last the full issue of that anniversary issue. 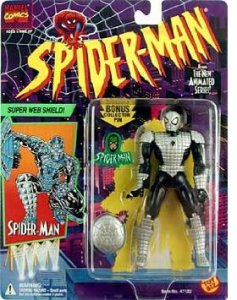 I loved that, even though it never appeared in the FOX Animated Series, they made an action figure of the armor!  I loved it so much!  There is just something about that costume, that I really enjoy.

When Spider-Man : The Other kept going into second printings (amazingly and surprisingly), the armor made a come back. 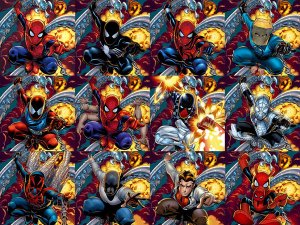 How great are those covers!  I really wanted the Scarlet Spider and Spider-Armor variants, Marvel Knights Spider-Man 20 & 21, respectfully

2099.  Superior Spider-Man realizes that someone is killing Spider-Mans (which I have debated using “Spider-Men” but it doesn’t feel right) and knows that he will appear on that list, eventually.

Spider-Man : India, is being attacked by a guy in a nice suit but with a scuba gear helmet and the weapon that is clearly killing the Spider-Mans.  Otto shows up and knocks the guy out.  India chooses to go with him, he is honored to be the first of such an army.  Turns out, he is not the first.

The broad is from Old Man Logan
The Six Arm Spider-Man, my mind just tells me he is from a What If Peter never lost his additional arms
The Spider-Man that gets the star treatment in the following back up story, is from the What If based on Spider-Man vs Wolverine, which revealed that the Hobgoblin was Ned Leeds – which he wasn’t.  I do like the idea that, after Gwen died, Peter realized that he needs to distance himself from who he loves, as his foes will always go after them.
Spider-Man Noir, I know from Shattered Dimensions, the best levels in that game!
I wasn’t even curious about the little Spider-Man there, at first, I thought it was like a Spider-Boy, as I wasn’t seeing his tail until I read, from the website, that that is Spider-Mankey from Marvel Apes and then I noticed the tail.

Such a good start an I’m super intriqued by Spider-Verse, I really need to know how this played out.

I keep remembering Spider-peeps and checking both Marvel Database and comicbookdb to see if they were shown.  Spider-Ham was, a version of Ben Reilly was and Spider-Man from Mutant X wasn’t, as he was killed in his first appearance in Mutant X 5, but I had forgotten that.  Also, Spider-Boy, from the Amalgam Universe, shows up in Spider-Verse 2, that’s pretty awesome!

I really like how, for every one-time outfit change Spider-Man has had, there is an alternate universe where that costume got to be the mainstay.

The Future Spider-Man from Amazing 500 did not appear in Spider-Verse, probably as he did die in Amazing 500 (but appeared in the two issues that preceded the renumbering – 57 & 58.  He apparently was kicked off the Avengers, in the future, shown in Amazing 637.  I could have sworn I read something about 500 Spider-Man appearing in a Spider-Verse miniseries.  Okay, he is this guy –

Who used that same sweet outfit, and was in Spider-Verse Team Up 1, and six other issues.  That explains that

For anyone that wants to know everything that happened, that link has everything, from it looks like – plot wise.  May 2015, is the giant omnibus styled collection.

Spider-Verse 2 seems to be the issue that gathers multiple known alternate Spider-Mans, including Yu Komori, the Spider-Man of Japan that appeared in the 1997 Manga series!