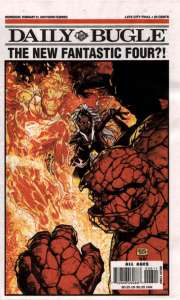 This was a clever idea Marvel tried, to promote future storylines as if they were newspaper stories.  I own this one and the second issue with the Astonishing X-Men on the cover.

Storm and Black Panther are joining the team as, after Civil War, Reed and Sue wanted to work on their marriage. 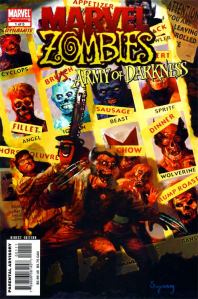 Apparently, I am keeping this due to the article regarding the upcoming Army of Darkness v Marvel Zombies.  Which apparently is enough to get me to keep a comic.

With this, we conclude Fantastic Four Month!  This is our last Event Month (that I can tell) for the year.  There will be my anual Anniversary Posts in November but that’s about it.

I need to work on how I end these Month events, as Ant-Man’s didn’t end on a high note either.

So look forward to a slew of Comic Reviews in September and October!  We have a lot to go through, as my Comics To Be Reviewed, are way prior to Secret Wars 2015 1 and the fifth issue of that series is out already.