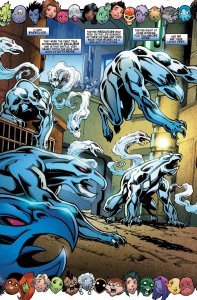 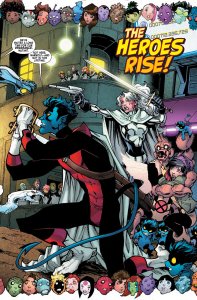 Apparently, since issue nine, Nightcrawler has been fighting the Warwolves, with his allies – Bess, Rico and Ziggy.

Nightcrawler recalls how the Warwolves were one of the constant threats Excalibur dealt with.  One of the memories is from the instance where they tried to take over Kitty’s body.  The Warwolves main attack is that they kill a human and then they, somehow, put on that person’s skin.

The Warwolves are working for Tullamore Voge, who has captured like a hundred children.

Kurt is fighting with all of his might, this is the final issue of his second ongoing (he has had two miniseries as well) and the stakes are pretty high.  Kurt is also movitated as he is tired of losing his friends, as he has lost – Amanda Sefton, Wolverine and Jean Grey.  For some odd reason, he is still missing Jean.

Bess tells Rico and Ziggy to run and hide.  Rico realizes that they can hide but all of these other children, don’t have that option and they decide to go after Tullamore Voge, as Kurt and Bess can’t do that, as they are busy fighting the Warwolves.

Bess tells Kurt about Rico’s plan.  Kurt wishes they could help with that plan but they are barely surviving the fight with the Warwolves.

Kurt tries to get the Warwolves to fight each other, while two of them are slowly draining Bess’ life.

Over with Tullamore Voge, he sends out a goon to fight Rico but he is so mad that he makes short work of the goon.  The Bamfs teleport Tullamore Voge into a cell that is in the Blackbird.

Poor Kurt, is out numbered and he knows Bess is losing her fight with the other Warwolves.

We get a flashback to Excalibur Volume Two Issue 2, where Kitty’s powers make it hard for the Warwolves to drain her life and wear her skin like a puppet.  Which is such a great scene to have replayed!

This gives the Warwolves pause, and Kurt starts to chain them together.  After this, Kurt rushes over to Bess’ limp body and begs for her to come back to him.  She comes around and makes out with him.

Kurt and the gang have returned the children, that they could, back to their families.  Tullamore Voge and his goons, killed some of the childrens’ family so those orphans are going to live with the X-Men.

I really like the scene with Kurt, Betsy and Rachel, as he catches them up on what has been happening.  During the panels, Bess and Kurt had a romantic getaway.  She is left him, to pursue finding her former teammates, the Crimson Pirates.

The Issue ends with Kurt, Rico, Ziggy and Rachel are one team and the Bamfs are another team, and all of them enjoy playing a game of baseball.  Oh Claremont, I do adore you.

This has been a very fun twelve issues.