Knowhere.  Years Ago.  Fang is telling X23 a story of when Wolverine got drunk, for once.  There is a moment when Wolverine, who is so drunk, that he snikted himself, but I’m not sure how that is even possible.  The claws come out of the base of his hands, which is how Daken’s one claw comes out.  They should always pop out of his back of his hands.  But whatever, it is a fun scene.

Knowhere.  Now.  X23 doesn’t believe that story, and neither do I.  Fang tires to go back and forth on referring to her as Laura or X23.  I had that problem (I still do) with addressing my in-laws as either Leslie and Dennis or Mr. and Mrs. Brannman.  Now, I just try to make clear eye contact or get their attention first.  He decides on, Laura.  Apparently, Wolverine always referred to her as, Laura, so he will honor that.  That must have been Logan’s rule, when not in her presence.

Fang isn’t here to torture Laura (I guess I will call her that, as well) like he did to Daken and Sabretooth.  Wolverine always liked her.

Fang recites a part of Uncanny X-Men 107 & 108, which I don’t own as they predate Uncanny X-Men 129.  Wolverine stole Fang’s costume, as his was pretty torn and tattered.  Laura doesn’t mention how she wore the costume, for some time, starting with Uncanny X-Men 451.  Which I don’t own but I do own 460, and she is still wearing that costume.  Where she gets a lady version of Fang’s costume, I don’t believe has ever been explained.  After that, House of M happens, and then the titles bounce around for a while until Ed Brubaker takes the title to Shi’ar space and it is unreadable for a year.

Fang explains how he wasn’t killed by the Brood.  He was, but the Lupak race are constantly born again as clones but with the memories of the previous model.  This hits close to Laura, as she is a clone.

The Changling.  Mystique explains the situation.  They can’t hide from Fang, so they have to kill him, before he can kill them.  Mystique hates this delay, as she has things to do.  This is issue eleven of a now, fifteen issue series, so there isn’t any time to waste.  Except for the all Deadpool issue that is coming.

Junk feels over his head, he isn’t Neuro, so all of this data that he has now on Fang, confuses him.  Mystique looks over the data, and dismisses Junk.

Crew Deck.  Shogun’s Chamber.  Lady Deathstrike is ready to kill Shogun but Ogun wants her to wait.  Ogun has control over Shogun’s mouth, when he is sleeping.  He needs Lady Deathstrike to bring Shogun to the brink of death, so that he can take over the weak body.

Fang and Wolverine didn’t always get together once a year, they both had busy lives.  Wolverine had his adamantium ripped out by Magneto while Fang was busy having a family.  Wolverine joined Avengers, and Fang was busy with the Imperial Guard.

Laura has seen Wolverine’s statue corpse and Fang has also seen it, in the care of the X-Men, and he has paid his respects.  Fang is quasi-trying to figure out Wolverine’s final days.

Fang has tricked Laura, as he has been drinking something with a intensified trigger scent, which I forgot she had that as part of her story.  So Fang just really wants a fight.

Lady Deathstrike slaps Shogun awake.  He doesn’t want to wake up to a fight but she is bored.

Colorado Rockies.  Fantomelle and Culpepper have stolen a pair of Wolverine’s dog tags.  Dogtagger, that’s who she stole it from – and he had thousands of them, but I believe that is the only one that was Wolverine’s – he wants it back and promises to not rest until he does.

Barcelona, Spain.  Later.  We see their home base, and she has three costumes – a classic yellow and blue, an X-Force (like from the cover) and another yellow and blue, maybe it is his Cassaday Astonishing X-Men costume?  There is a pair of claw gloves and a pair of towels?

Okay, I misread the scene with Fang and Laura.  He just had the glass of the trigger scent.  Laura is upset as that is the only thing that makes her into an animal.  Fang’s original goal was to have her drink it and set loose on Mystique’s team.

Now Laura and Fang are fighting in the bar.  What changed his mind was that Laura had dyed some of her hair with yellow and blue.  He mostly just wants to know why she is on a team full of monsters that Wolverine hates. 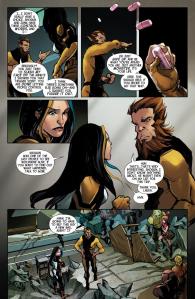 She mentions that Shogun and Junk have code words.  Fang dismisses the idea of code words, but they are real threats, Shogun could kill her with a single word.  Fang throws some pills at her, which I’m not sure what they contain.  Laura tells Fang that Shogun was one of the last people to see Wolverine alive.  Fang wasn’t even looking to speak with Shogun.

Mystique is finishing telling the team, what is the plan.  Junk is hoping to stay out of it, as he isn’t on Fang’s radar.  Daken tells Mystique that once you go on an adventure with Fang, that’s all he wants.  Mystique isn’t so sure about that.  Mystique wants to destroy Fang, which of course, is when he returns with Laura and his interest has been piqued.  This, naturally, ends the issue.