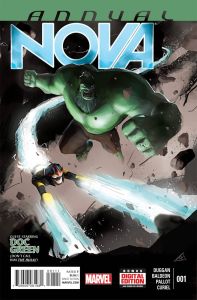 I really only bought this for the last page of the main comic (there is a cute one page comic strip, in the back).  In classic Annual goodness, Duggan has taken the opportunity to pair up his two ongoings – so fans of one can try out the other.  That’s pretty smart!  Surprised he didn’t try to work Deadpool into it!  I’m glad he didn’t as that would have made this something else entirely.

Once again, the Previously page is pretty essential reading.  I forget that Sam (Nova) is only 15 years old.  I thought Sam’s father was dead but apparently he is stranded in space.  That could have came out of Original Sin.  I read Duggan’s Hulk 9 (and really enjoyed it) but I barely remember Hulk in AXIS, besides when he turned into Kulh, the Hulk’s Hulk.  Poor Duggan, hopefully that series of his didn’t have to get sidelined too much due to that silly crossover.  During the Kulh situation, he goes to Carefree, Arizona and Nova fights him.  As a reward, he is made an Avenger but his helmet is beyond repair.

Nova has gone to see if Reed Richards could fix his helmet.  Reed is out but Doc Green (as I have to remember to refer to him) is there – for some reason.  He apologizes for his actions in Carefree.  Doc Green offers to fix Nova’s helmet, he is afraid of his secret identity becoming known.

Doc Green gives Nova a brown paper back (just like Spider-Man had to do in Amazing 258, for the same reasons.  As he didn’t want the Fantastic Four to learn his identity, once he lost the black symbiotic costume).  In both circumstances, the extra step feels silly.  What are the chances, even in New York City, that they would even recognize Nova or Spider-Man in their civilian identities?  The chances are pretty low, plus the characters would be more careful once they see the Fantastic Four and Doc Green, the next time they come across them.

Doc Green reveals that nothing on Earth can fix the helmet.  Nova believes he knows a location that has the spare parts.  Doc Green states that he isn’t going to space, as nothing good happens up there (the same with Shadowcat!).

Doc Green offers to loan Nova a spaceship but Nova is only use to propelling himself through space, he doesn’t know how to fly an actual ship.  Nova (playfully) threatens to have She-Hulk sue Doc Green, as he does owe Nova for the helmet breaking in the first place.

In one of the many great pages in this comic, Doc Green agrees to go with Nova.  Sam takes off the bag over his head and Doc Green, in a truly funny scene – grabs the sides of his face, in shock that he now knows Nova’s secret identity.  Sam is confused as he shouldn’t know him, and Doc Green states that he doesn’t.  Proving how silly a brown paper bag, over one’s head, is.

Nova makes some small talk by telling Doc Green some of his accomplishments.  He met a cool girl, he beat up a space pirate, blew away a Chitauri fleet.  His father has been captured, somewhere in space – so that wasn’t good.

Light years from Earth.  Nova’s helmet picks up a distress signal, but only that it registers one.  Sam believes it could be his father but we will learn more about that later.  For anyone who reads this blog, on a regular basis, and knows the timing of this issue, it may be obvious but we will get there.

In a handy editor note, we learn that the bunker these two heroes are going to, was discovered back in Nova 20, he found it with Rocket.  They get to the bunker, and none of the three helmets have the missing parts.  Nova puts on one of the broken helmets and asks it to locate another Black Nova helmet.  Which I’ve noticed that he doesn’t wear a yellow one like Richard Rider did, but I thought maybe the change was only cosmetic.

The helmet quickly shows a location but Nova wanted more time with the map but Doc Green knows where they are going.  Which is, Xandar, the home of the Nova Corps – which has seen better days.

Nova and Doc Green come across a salvager, Zarihs Didisiqui, and his family.  They tell the duo that the current overlord, Gron, has a black helmet – and that he is horrible.  Nova offers their space ship for the location of Gron – which doesn’t make Doc Green happy, as it is his ship.

We see Gron, who is electric whipping Xandarians.   Gron is excited about the prospect of getting a second black Nova helmet.  Doc Green recognizes Gron as being of the race, Darkamite.  After confirming a Darkamite’s power set, Doc Green uppercuts Gron across

Nova asks if that is how hard Doc Green punched him but Doc Green doesn’t keep track of how hard he punches fools.  It would be fun, if he did.  Doc Green examines the helmet and it has the missing part that Nova has.  Doc Green doesn’t want to tell the family about the helmet but as he says that, Nova sees their spaceship fly away.  Another great page and excellent pacing!

Doc Green gets to fixing the helmet, Sam takes a nap.  He wakes up and tries out the helmet.  It works perfectly, as he flies into space and blasts rocks.  As thanks, and after he asks how long Doc Green can hold his breath, Nova grabs his new buddy and they fly into space.  Doc Green loves the experience.

Knowhere, Cosmo’s Crib.  Cosmo, the astronaut dog (seen in the Guardians of the Galaxy film), wakes up to two new guests.  Nova wants to use Cosmo’s teleporter to get Doc Green back to Earth.  Cosmo is more than happy to help, as nothing good happens when the Hulk is in space.

Nova gets back into space and hears that the distress call came from Lydia, Star Lord’s computer system on his new ship. 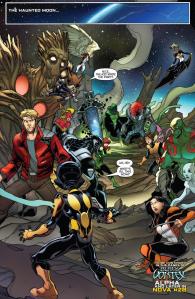 The Haunted Moon.  We get Nova coming into Black Vortex Alpha.  Look at Baldeon’s Lockheed, not too bad, as is his Shadowcat!

Nova 28 handles his own issue that we’ve already reviewed already, at this point.

This has been a great use of the Annual issue.