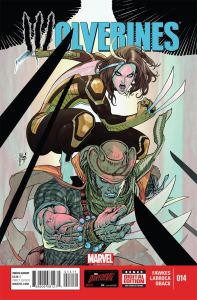 Now that the silliness of the pure Deadpool issue is behind us, we can get back on track as this series ends with issue twenty and I imagine these last six issues are going to be fruitful.  Now that Ogun may be completely out of Shogun’s head, I’m not even sure I should be buying this?  I’m sure he will bounce back, it is Ogun, that is what he do!

36,000 Feet Above Neveda.  Mystique is trying to get all of her players where she needs to have them.  I like that we get her To Do List.

Deathstrike and Sinister is purposely vague but the rest makes sense with the reading of this issue.

Mystique calls Daken, using a fake identity.  We get to the main problem with this issue.  Larroca draws Daken as if he is Wolverine.  He has a full head of hair and even worst, mutton chops.  That isn’t Daken in they very least!  The point that other characters call him, Daken, and that he is missing his left eye and arm, prevents this from being another character.  How did an editor not catch that?  Also, does Larroca think that Daken looks just like Wolverine?  I suspect that Daken has never looked like Wolverine, like ever.  Well, except for when he was Dark Wolverine but that was merely a costume choice.

Mystique tells Daken where Siphon (the green fella that stole his healing factor) is located, he jumps out of the Changling.  Mystique, as Mystique, tells X23 what is happening. 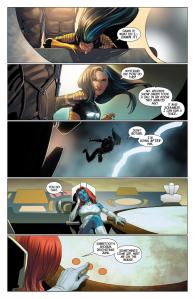 X23 jumps out of the plane.

For some reason, both Daken and X23 crash hard onto the ground.  Even with their parachutes deployed, they don’t land like they’ve jumped from planes for years.  A big rig truck comes by and Daken throws the driver out, via the window.  They head to a deserted gas station.  Once inside, they see both Siphon and Blade.

I do like X23 quickly trying to get Blade to recognize her from the X-Men Volume Two relaunch with Victor Gischler’s Curse of the Mutants storyline.  Blade remembers her, not like it really matters.

Blade was hoping to kill Siphon but is okay with Daken softening him up. 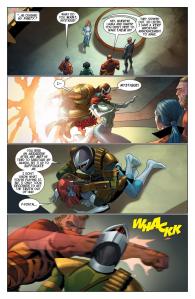 Sabretooth notices that two of their number are missing.  Mystique simply states they stepped out.  She has an announcement to make.  Just then, Portal (who owns a similar mask to Darkhawk) portals in and attacks Mystique.  Sabretooth punches Portal to the back of his dumb head. 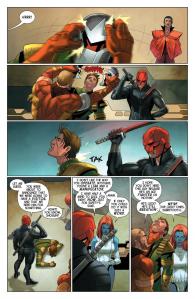 I really like how casually Shogun knocks Portal out.  Shogun isn’t impress at all.  He can tell Mystique was manipulating the entire situation, he sees right through her.

Mystique hints that Portal is going to be a huge help to them.

In the middle of their fight, Siphon starts quoting Miyamoto Musashi’s Book of Five Rings.

“Know your enemy, know his sword”

Blade asks who Siphon is, and I like how Siphon speaks up, revealing the origin that he knows.  He is another Paradise reject.  When he hungers, that is all he can do is feed.  Once he feds, though, he starts remembering who he use to be.  He may have been a teacher.  Siphon apologizes for stealing Daken’s healing factor, he was told that Daken was better off dead – as he is a mass murderer.  Siphon isn’t wrong on that front.

With each new cut, Siphon warns, that he uses up the healing factor power that he . . . siphoned.  When that happens, he will hunger again and be simply a monster – once again.  Blade knows monsters and commits to taking out whoever wins between Daken and Siphon.  X23 would rather that the fighting just stopped.

Siphon, now that he can be a gentleman, agrees to Daken’s duel.

Siphon appears to break Daken’s one arm (or make it go numb) at the elbow.

Just then, the floor breaks apart as vampires come rushing out of the ground.  Of course

Daken is on the floor, crawling back to Siphon, when X23 has had enough.  It is a sad sight.  She comes at Siphon, cuts him deeply.  He (somehow) grabs her by the throat and is about to siphon her healing factor.

The issue ends with Daken, getting to his feet, he isn’t ready to go down yet.

“Do not fear death”

I can only imagine that come issue fifteen, Daken looks back on model.