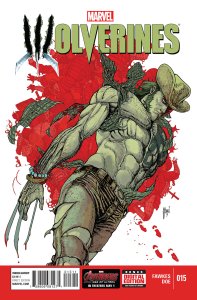 Death Valley.  Siphon has X23 by the throat.  Daken, who Doe tries his best to model-fix Daken from Larroca’s attempt.  The mutton chops are still there but now Daken’s full head of hair is a narly Mohawk type of cartoon samurai sort of thing.

Daken wants Siphon to turn his attention back onto him.  It wasn’t Siphon that got X23 involved, she wanted the fight to end and now Siphon will attempt to end her.  I really like how bored with all of this, Blade is.  Blade does like X23’s style, but that is it.  Siphon keeps taking hits, making him dumber and Daken keeps getting bones broken. 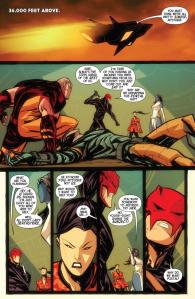 36,000 Feet Above.  Another great plot in this issue?  Shogun just plain being done with Mystique and her silly secretive plans.  Mystique keeps playing dumb, which is the wrong move.  She should just reveal the next step in her plan and gain a little credibility. 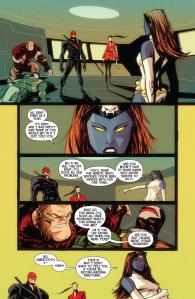 Mystique does hint what the plan is, that it is risky but it will solve all sorts of problems.

Siphon knocks Blade outside, which causes Blade to drop his s-word.  Siphon tries to pick up the sword but loses all of his fingers on his left hand.  That Blade, he really likes to keep his swords.  X23 starts taking petty on Siphon, as his brain has been reduced to only being able to make grunts.  Daken has the chance to kill Siphon but chooses not to, Blade takes his sword back.

The Changling arrives to pick everyone, but Blade, up. 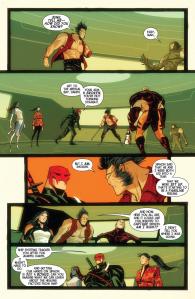 Daken gets on the plane and wants to know how they knew where they were.  They had jumped out of the plane and then stole a semitruck, and got to their final destination.

Shogun tries to explain that it is the tracking devices that they have that lead them there.  Daken knows that Mystique had a hand in it.  Shogun is excited about Siphon being on board, they could learn more about healing factors. 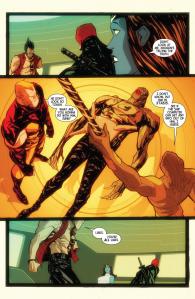 I like how Sabretooth is under the impression that Junk is the resident tech guy, but all Junk knows how to do is press the computer buttons.

Daken suspects they are all lying to him.

Two Hours Later.  Daken comes into X23’s room.  X23 instantly recognizes Daken as Mystique, she feints shock but doesn’t change shape.  X23 states that Mystique is clearly close to her timetable but threatens to ruin it by leaving.  Once X23 leaves the room, Mystique shifts back to her proper form.

I do like how X23 tells Mystique that she will never tell how she knew it was Mystique the hold time.  I wonder if she has known for a while, as in the first few issues, Mystique posed as Daken.  I believe she didn’t do it to X23, so that’s why she is probably confident in her Daken impression.

Next issue promises to have Mister Sinister back!  Probably find out if Endo actually died, in an earlier issue.